Bangkok: A Thai hospital morgue overwhelmed by COVID-19 deaths has begun storing bodies in refrigerated containers, resorting to a measure it last took in a devastating 2004 tsunami, as the country grapples with its biggest coronavirus outbreak.

Thailand on Saturday reported a daily record of 18,912 new cases and a record of 178 new deaths, bringing total accumulated cases to 597,287 and 4857 fatalities. 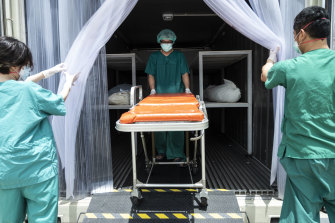 A cold-storage shipping container in Bangkok that was brought in to store additional bodies due to the COVID-19 outbreak. Credit:Getty Images

At Thammasat University Hospital near the capital Bangkok, a 10-freezer morgue usually handles up to seven autopsies a day. But the latest wave of the coronavirus pandemic means it now has to deal with more than 10 bodies daily.

“There’s not enough space, so we bought two containers for bodies’ storage,” Pharuhat Tor-udom, a director of the hospital, said, adding the containers cost about 250,000 baht ($10,290) each.

Almost 20 per cent of bodies with an unidentified cause of death later tested positive for COVID-19, overwhelming the morgue and medical staff, he said.

“During the tsunami, we used containers to store bodies waiting to be autopsied for identification. But we haven’t had to do that [again] until now,” Pharuhat said. 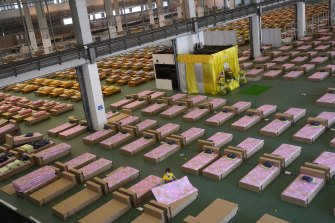 There were several bodies kept in one container on Saturday, waiting to be retrieved by their relatives, he said.

“What makes us feel extremely sad is that we were not able to help people who died because of lacking access to medical treatment,” he added.

Hospitals in Bangkok and the surrounding provinces are running out of capacity due to the surge in infections.

Malaysia, one of the hotspots of the disease, reported 17,786 coronavirus cases on Saturday, a record high.

More than 100 people gathered in the centre of Kuala Lumpur expressing dissatisfaction with the government’s handling of the pandemic and calling on Prime Minister Muhyiddin Yassin to quit.

Vietnam’s government also announced that from Monday it will extend strict curbs on movement in its business hub Ho Chi Minh City and another 18 cities and provinces throughout its south for another two weeks to help combat its worst COVID-19 outbreak.

After successfully containing the virus for much of the pandemic, Vietnam is facing a rapid spread of infections that has led to movement restrictions in around one-third of the country. It has registered a total of 145,000 cases and 1306 deaths, 85 per cent of which were recorded over the past month.

“Authorities of Ho Chi Minh City and other places have to urge citizens to stay where they are and strictly follow the curbs,” a government statement said on Saturday.

The southeast Asian country reported 8624 new infections late on Saturday, with most of the confirmed cases detected in the south, especially Ho Chi Minh City where social distancing measures have been enforced since May 31.

“The implementation of curbs in the region is to create a safe belt around Ho Chi Minh City and not let the epidemic spread further,” said Vu Duc Dam, deputy prime minister and head of the COVID-19 task force.

“It may take months to contain the situation in the area.”

The city recorded its first death from COVID-19 on June 2, but its total deaths reached 1164 on Saturday, data from Ho Chi Minh City Centres for Disease Control and Prevention showed.

The central coastal city of Danang also imposed movement curbs from Saturday until further notice. In the capital Hanoi, in the north, where a lockdown order will expire next weekend, authorities were considering extending restrictions.

The Vietnamese health ministry issued an urgent appeal on Friday for private hospitals to treat COVID-19 patients as state hospitals were stretched to capacity.

The re-emergence of the virus with complicated clusters has prompted calls for the government to accelerate vaccinations. Its inoculation campaign has heavily relied on AstraZenca’s vaccine.

The country received the first one million Sinopharm doses out of five in its order from China on Saturday, according to a document from Ho Chi Minh authorities. The remaining four million doses will arrive in August.

COVID-19 infections have increased by 80 per cent over the past four weeks in most regions of the world, WHO Director-general Tedros Adhanom Ghebreyesus said on Friday.

“Hard-won gains are in jeopardy or being lost, and health systems in many countries are being overwhelmed,” Tedros told a news conference.