Theresa May was accused of ‘betraying the British people’ by seeking a delay to Brexit by one of her own senior backbenchers today.

Hardcore Tory Brexiteer Peter Bone warned his party leader that ‘history will judge you at this moment’ in a pointed exchange during Prime Minister’s Questions in the House of Commons.

The 66-year-old Wellingborough MP’s intervention came minutes after Mrs May had confirmed she was asking the EU to delay Brexit until the end of June in order to get a Brexit deal past MPs.

She also gave a strong indication that she could quit if the UK has not left the bloc after that three-month extension.

He said: ‘If you continue to apply for an extension to Article 50 you will be betraying the British people. If you don’t, you will be honouring their instruction. 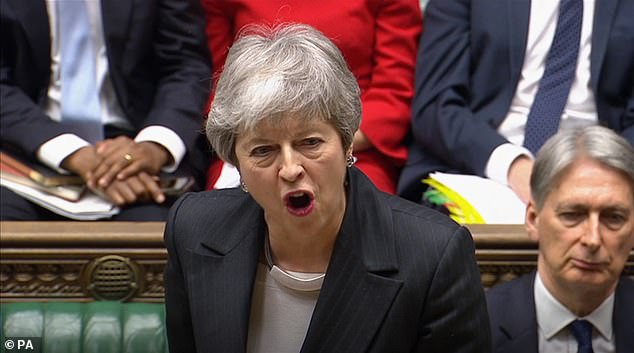 He also claimed that Mrs May had committed to a March 29 Brexit 108 times in the House of Commons while Prime Minister.

There were shouts of ‘give over’ and this is not helpful at all’  from some of the MPs sat around him as he spoke.

The Prime Minister also revealed today that she will bring back her ailing deal for a third time ‘as soon as possible’ in a letter to European Council President Donald Tusk which also suggested she will try to introduce new reassurances on the Irish border backstop to win over Brexiteers and the DUP.

Mrs May told the Commons today that Britain is ‘fed up’ of waiting to quit the EU and said it would be ‘quite wrong’ if the public is asked to vote in the June European election three years after they voted to leave the bloc. 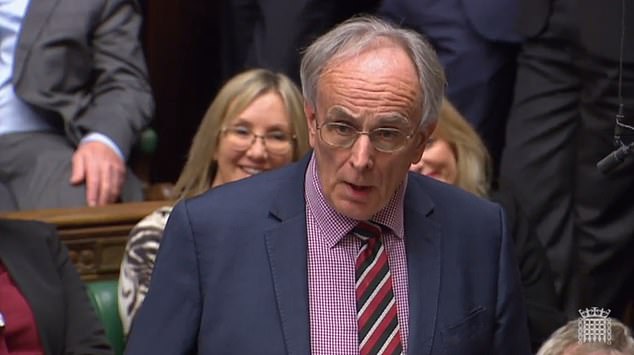 Peter Bone regularly rises to question the Prime Minister at PMQs. The Wellingborough MP is a long term and devout Tory Brexiteer

Hinting any further delay would lead to her resignation she twice told the Commons: ‘As Prime Minister I am not prepared to delay Brexit any further than June 30’ and afterwards her spokesman refused four times to rule out she might quit.

And in a plea to MPs who have voted her deal down twice already she said: ‘This House spending endless hours contemplating its navel on Europe. This House has indulged itself on Europe for too long. The British people deserve better’.

Mrs May last night abandoned her plan to ask the EU for a nine-month Brexit delay or longer after furious Brexiteer cabinet ministers threatened to quit and told her the Tory party would only accept a wait until June.

This morning she spoke to Mr Juncker who reportedly told her that the EU would only consider a short extension until on May 22 to avoid Britain having to take part in European elections – or the delay will have to be up to two years.

The PM has now published the letter sent to Donald Tusk today, which says Britain needs a delay until June 30 to pass and legislate for her deal – and it also blasts Commons Speaker John Bercow for making it ‘impossible’ to hold a third meaningful vote on her deal before the summit.

She appealed for the EU Council – which includes the leaders of all EU states – to formally adopt the three extra documents agreed with Mr Juncker last week to pass Mr Bercow’s ruling on a new vote being on a ‘substantially different’ purpose.

Mrs May’s letter said: ‘If the motion is passed, I am confident that Parliament will proceed to ratify the deal constructively. But this will clearly not be completed before March 29, 2019.’

Admitting the timetable was ‘uncertain’ she said: ‘I am therefore writing to inform the European Council that the UK is seeking an extension to the Article 50 until June 30 2019.’

Reading terror suspect's mum says 'if he's a terrorist, England made him a terrorist' after triple stabbing