The Japanese ambassador to Australia has called for democratic allies to speak with one voice when pushing back on China’s coercive activities over Taiwan, as his country draws attention to potential military threats in its neighbourhood.

Japan has its own territorial dispute with China over the Senkaku Islands, north-east of Taiwan, and is wary of the worsening security situation in the region.

“At the same time, any country ought to come up with a consistent and united policy on diplomatic and security issues of such significance.” 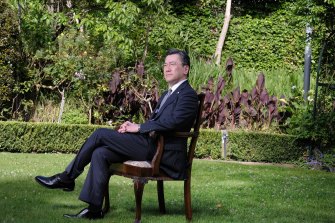 The envoy cautioned he wasn’t wading into Australia’s domestic politics, as the issue of Canberra’s defence posture towards Taiwan split the government and opposition

Opposition foreign affairs spokeswoman Senator Penny Wongaccused the federal government of hyping up the threat of a China-Taiwan war for partisan political gain earlier this week.

Defence Minister Peter Dutton responded by denouncing Wong’s speech as “very irresponsible” and warning that Labor would waver on the AUKUS defence agreement if it came to power. 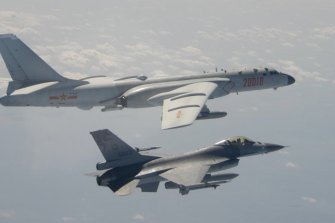 A Taiwan Air Force F-16 fighter jet flies alongside a Chinese H-6K bomber during an incursion into Taiwan’s airspace in 2018.Credit:File

Partisan questions about Australia’s resolve to assist Taiwan started after Dutton said on November 13 that he could not conceive of a situation in which Australia would not support the US in a conflict over the island.

On only his second visit to Melbourne since taking up the post in Canberra a year ago, Yamagami emphasised Taiwan’s importance to the “peace and stability” across the East China Sea, the Pacific, and – through its place in global supply chains – the world.

Taiwan, which had seen its diplomatic status steadily decline since the 1970s, has re-emerged as a flashpoint in China-US tensions in the past year.

Chinese President Xi Jinping last month said the “historical task of the complete reunification of the motherland must be fulfilled” – a comment seen as threatening military action over Taiwan.

China frequently sails military ships through the Taiwan Strait in a show of force. US ships also routinely transit the waterway in what’s considered a show of support for Taipei.

The security situation has worsened not just for Taiwan but Japan, where a small flotilla of Chinese and Russian ships recently passed between the nation’s main islands.

Chinese ships used to appear three times a month for a couple of hours in territorial waters of the Japan-controlled Senkaku Islands in the East China Sea. In recent months, China has sent larger ships which stay for up to 60 hours at a time.

In this climate, nations like Australia and Japan “need to speak with one voice – and the important message is that we should increase deterrence”, Yamagami said. 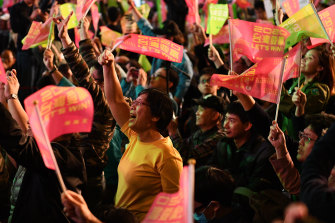 Supporters react after confirmation that Tsai Ing-Wen of the Democratic Progressive Party was re-elected as President of Taiwan in 2020.Credit:Getty

Watching events in the Taiwan Strait, “we can feel the eagerness on the part of Taiwan to maintain their democracy,” he said, which he calls a “very sound and natural development”.

“Anyone is happy to be governed by the government they elected themselves. Isn’t that the promise of human beings backed up by history?”

Despite the fact that democracy is being “tested” globally, it has actually flourished in Asia in recent decades in places like Taiwan, the Philippines and Indonesia, he said.

At the same time, arrogantly preaching the value of democracy to friends in the Indo-Pacific region is not “wise”, he said. 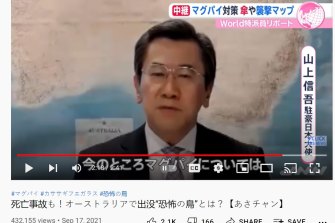 Yamagami has been called a human “Department Store” by Australian colleagues because of the diversity of his professional background (foreign policy, economics, trade, he even worked for a police agency).

Both his host country and his home country are famous for being “understated”, he said, which may have led to Australian and Japanese people taking each other for granted in recent years.

For that reason, Yamagami said he hoped to raise the profile of the relationship in both countries, going so far as to pen a regular letter to the public from his office.

His September missive about Australia’s magpies for his embassy blog was picked up by a Japanese TV channel, with the resulting YouTube video garnering more than 400,000 views.

When one of the birds landed on his head recently, he was told that meant they were treating him like a local.