A TEENAGER who claims to be Diego Maradona's son has demanded the exhumation of the soccer legend’s body.

Santiago Lara instructed his lawyer to make the sensational move less than 24 hours after the former Naples and Barcelona star was buried. 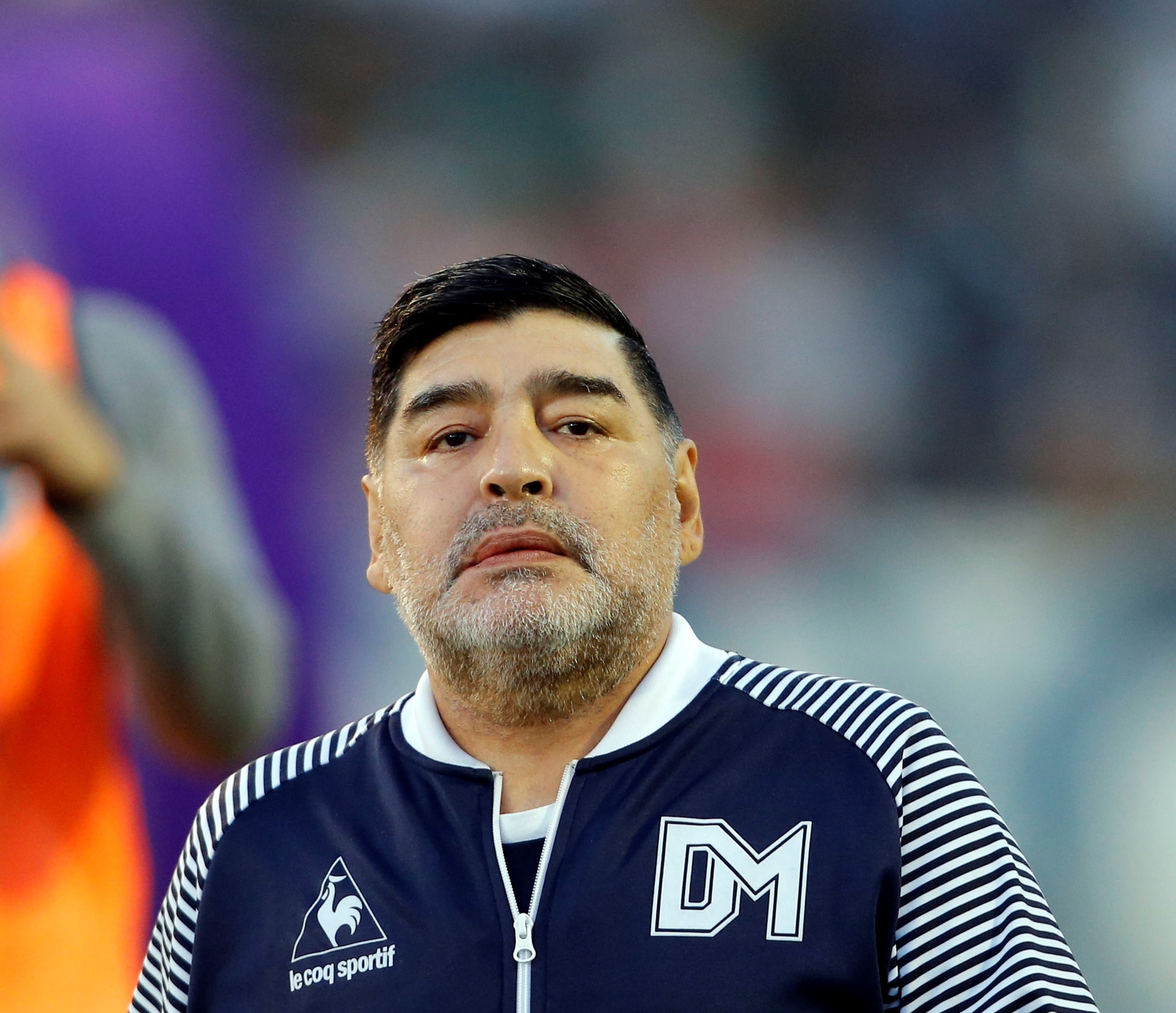 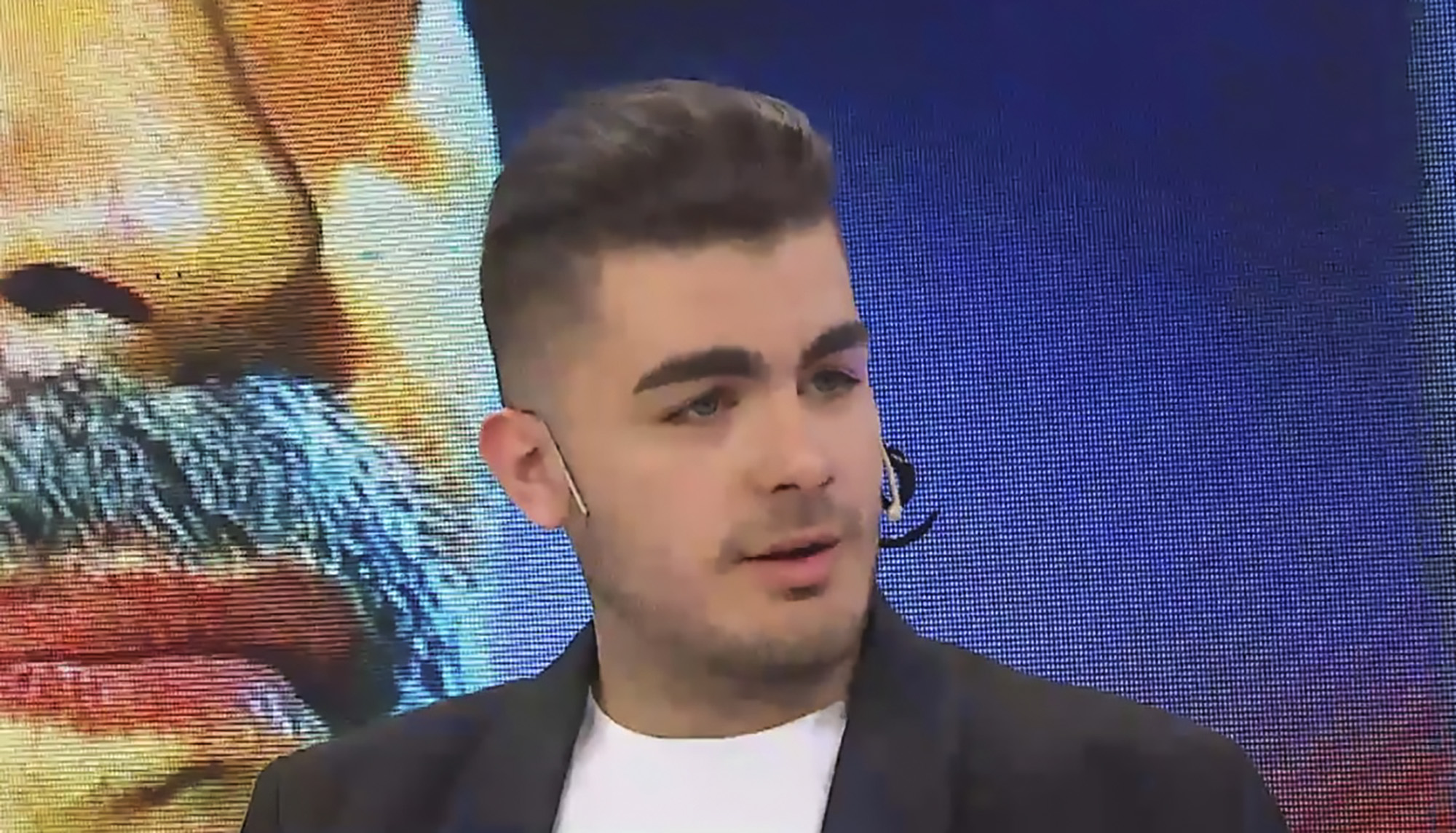 Jose Nunez has lodged a bombshell written request demanding Maradona’s autopsy, DNA results and the exhumation of his body so it can be transferred to a court morgue.

Mr Nunez made filed the request with a family court in Santiago’s home city of La Plata – just south of Buenos Aires.

It is the latest development in Santiago's attempts to prove he is the legitimate son of the former footballer.

It follows a long and frustrating battle by Santiago to find out who his real father is, which began in 2014 when he was just 13 and saw a magazine front cover with Maradona’s face on it and his pixellated underneath.

Santiago, the supposed sixth child of a the former forward, spoke for the first time four years ago of his fight.

The football officially has five children including two he took years to recognise as his.

Natalia’s ex-boyfriend Marcelo Lara raised Santiago as his own son.

The teenager instructed his lawyer to start legal action to prove he was Maradona’s son while the retired footballer was alive after failed attempts to reach an amicable settlement with the star’s legal team.

After Mr Nunezmade shocking demands, Santiago told Telemundo programme Suelta la Sopa: “My mum sadly died when I was just three years old but days before her death, when she had to remove her ventilator to speak, she told a group of lawyers I was Diego’s son.

“I just want to know who I am. The financial side of things is not something that matters to me.

“I know this demand is going to cause major turmoil in Argentina but if I don’t do this, who is going to give me the DNA?”

Who are Maradona’s children?

His lawyer, in another interview on an Argentinian TV show which he attended with a colleague but not Santiago, added: “We’re talking about a young lad who has been left in the dark about who he really is.

“Santiago didn’t come here today because he’s suffering emotionally. Not only does he not know who he is but he couldn’t say goodbye to his father.”

The four-page document filed by the lawyer and his partner Juan Benitez demands the exhumation and preservation of Diego Maradona’s body until DNA tests can be carried out “so Santiago Lara can obtain his true identity”.

It says the teenager found out about the former footballer’s death through the media and it caused him “great pain, worry, suffering and anguish.”

The document, submitted to La Plata Family Court Number Seven, adds on the third of the four pages: “We ask you to submit through the chain of custody, the detailed results of the autopsy and lifeless body of Diego Armando Maradona.

“We request the sealing of the coffin containing Diego Armando Maradona’s body so it can be transferred to La Plata’s judicial morgue for its preservation.

“We ask that Jardin Bella Vista Cemetery receive the order to exhume the remains of Diego Armando Maradona so they can also be transferred to the same morgue.”

Santiago, the spitting image of Maradona when he was younger with his long mop of curly hair, spoke for the first time in September 2016 about his predicament.

He said: “My dad is always going to be Marcelo Lara but what I’ve been told is that my real father is supposedly Diego Maradona.

“I think I look like him, the face, the curls, everything. I look at Marcelo and I know we’re not alike. It’s not easy to wake up in the morning with that feeling.”

Santiago told local media in a video interview he learned Maradona was his alleged father when he was 13.

He said: "I found out after I went past a newspaper stand near my house and saw a magazine front cover with Maradona’s face on it and mine pixellated underneath.

“I was left in a state of shock because I didn’t know what I was doing in the magazine.

“I went running home and asked Marcelo what was going on and he explained everything.

“He told me my mum was well-known on the modelling circuit when she was younger and he told me he had the feeling I wasn’t his son.

“He told me a DNA test was asked for but was never forthcoming.”

My dad is always going to be Marcelo Lara but what I’ve been told is that my real father is supposedly Diego Maradona.

Late last month, around the time of Maradona’s 60th birthday, Santiago and his lawyer revealed they had initiated legal action to try to prove the family link.

Mr Nunez said he had gone down the court route because of “radio silence” from Maradona’s lawyer Matias Morla following an “encouraging” initial dialogue when they were given the impression the soccer legend would agree to a DNA test voluntarily.

Maradona has recognised two sons and three daughters by four different women including his ex-wife Claudia Villafane and former long-term partner Veronica Ojeda as his own.

Giannina Maradona, one of the former footballer’s two daughters by Villafane, joked last year after the names of three children said to be his in Cuba were made public: “Just three more needed for the team of 11. You can do it!!!”

Popular Argentinian TV programme Intrusos said she had a young daughter which would have made the former Naples and Barcelona star a grandfather if he was confirmed as her dad. She has given birth to another child.

She is understood to have launched legal proceedings in April last year to try to prove her blood link.

Maradona’s lawyer Matias Morla said months before the star's untimely death the retired footballer would assume his responsibilities as Santiago’s father if the blood link was confirmed.

Morla has previously been quoted as saying “Everyone knows that in Argentina there’s Santiago and another person that people are talking about”, although other media in the South American country have speculated the 11th child that would make up Diego’s football team is a fourth Cuban.

The Cuban trio whose names have already been made public are Joana, Lu and Javielito, born after Maradona moved to the Caribbean island in February 2000 to fight drink and drug addictions.

Mr Morla, who admitted in October 2018 the ex-footballer had been “naughty” in Cuba and confessed: “There’s going to be a lot of Maradonas, a lot, even if some people don’t like it”, has confirmed the trio met him during the funeral of Fidel Castro.

Over recent years Maradona had recognised his 34-year-old son Diego Junior, born from an extra-marital affair with Italian model Cristina Sinagra, and 24-year-old Jana who met her dad for the first time nearly six years ago following a court fight by her mum Valeria Sabalain.

Dalma, Giannina and Jana were pallbearers at Diego’s funeral on Thursday at private cemetery Jardin Bella Vista on the north-west outskirts of Buenos Aires.

Italy-based Diego Junior was prevented from attending after being hospitalised with coronavirus.

It comes after a funeral parlour worker has been sacked after taking a selfie next to the open coffin of Diego Maradona.

The sick photo showing him doing the thumbs-up by the football idol’s body started circulating on social media this afternoon.

Argentina's president Alberto Fernandez has decreed three days of mourning after the death of the legendary player of a suspected heart attack aged 60.

Maradona's body lay in a wooden coffin with the blue and white national flag and an Argentina shirt with his famous number 10 in the Casa Rosada presidential palace in the capital Buenos Aires.

But earlier a funeral parlour employee, understood to have been one of the men tasked with preparing Maradona’s body, took a selfie of himself with open casket. 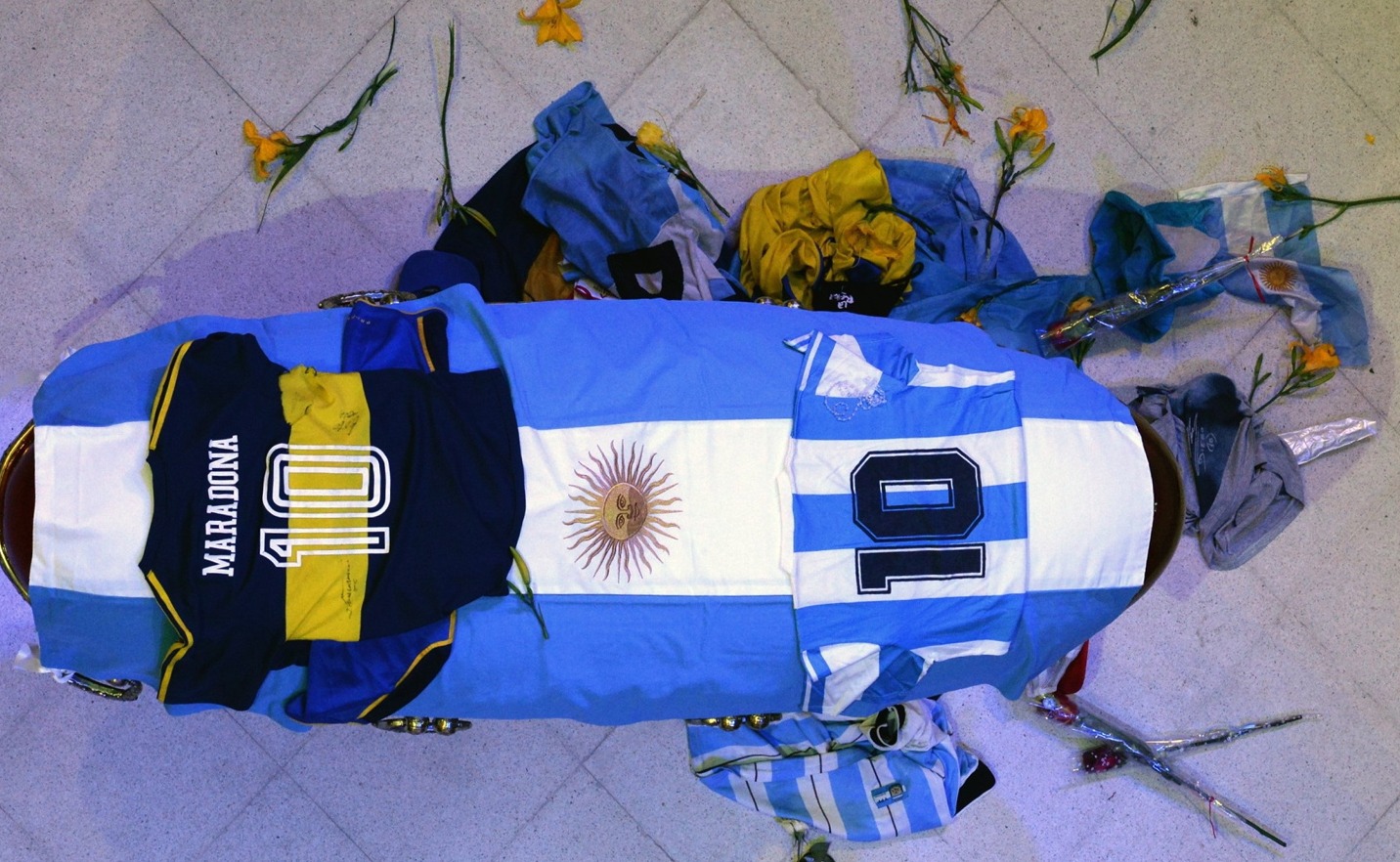 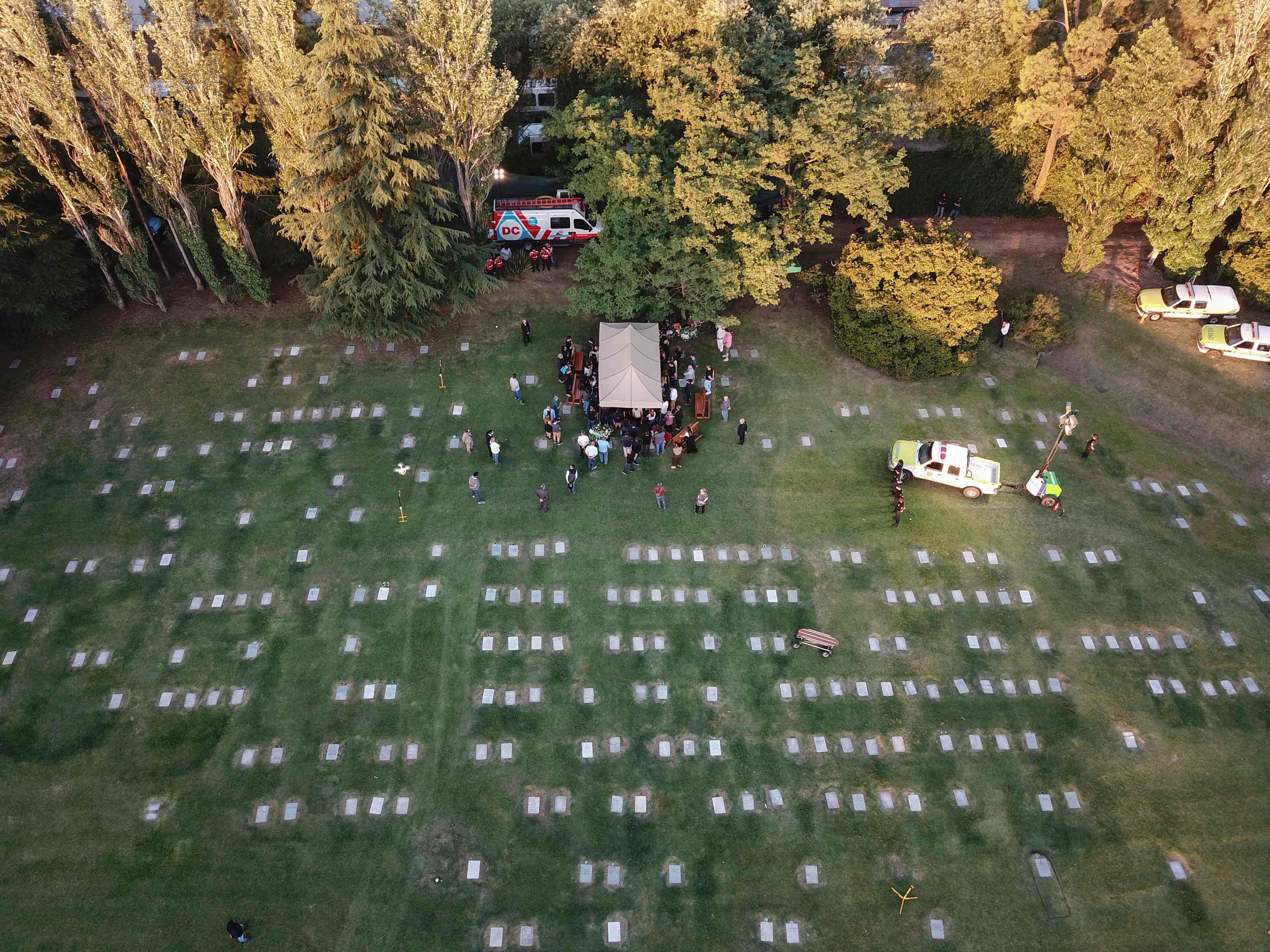 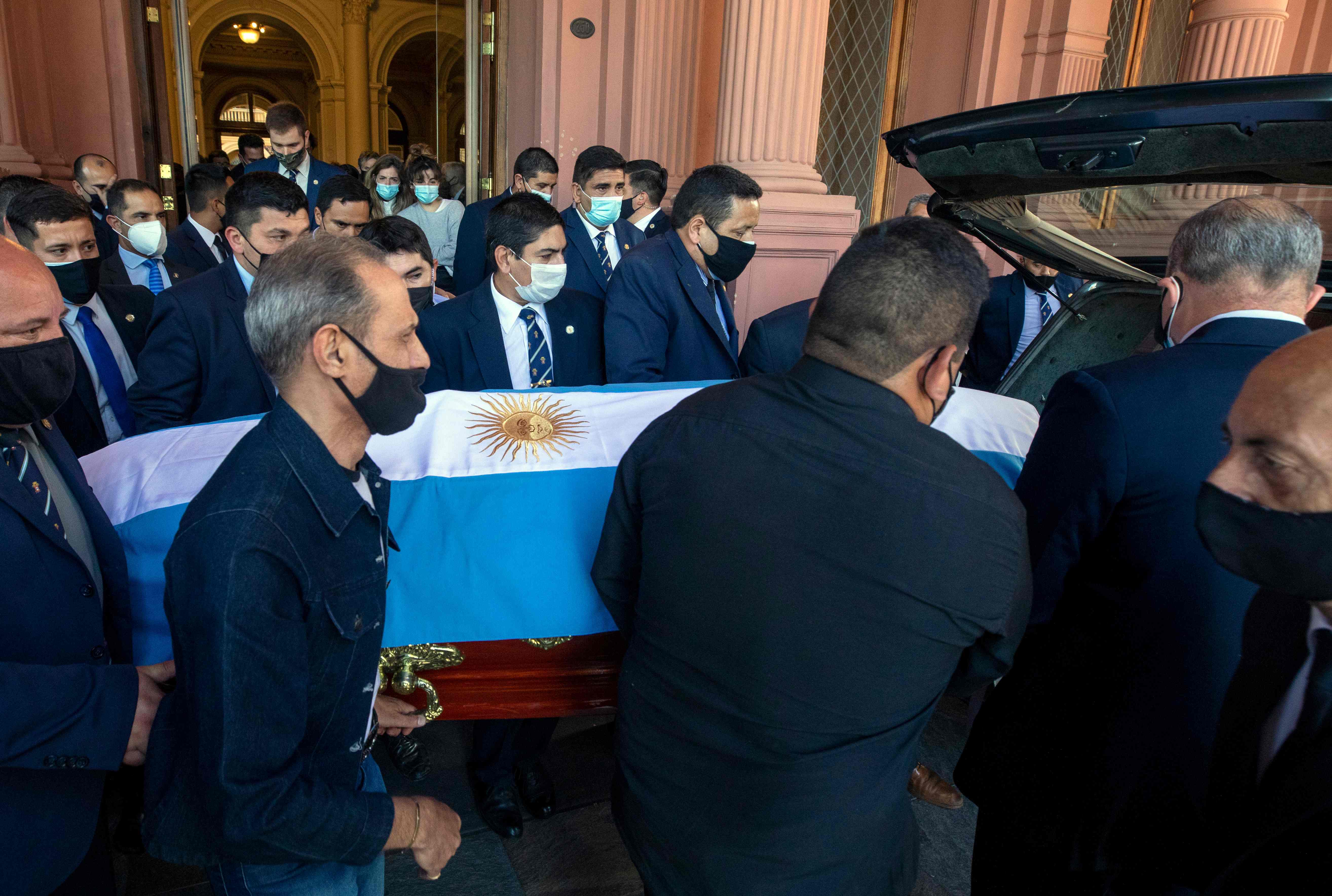 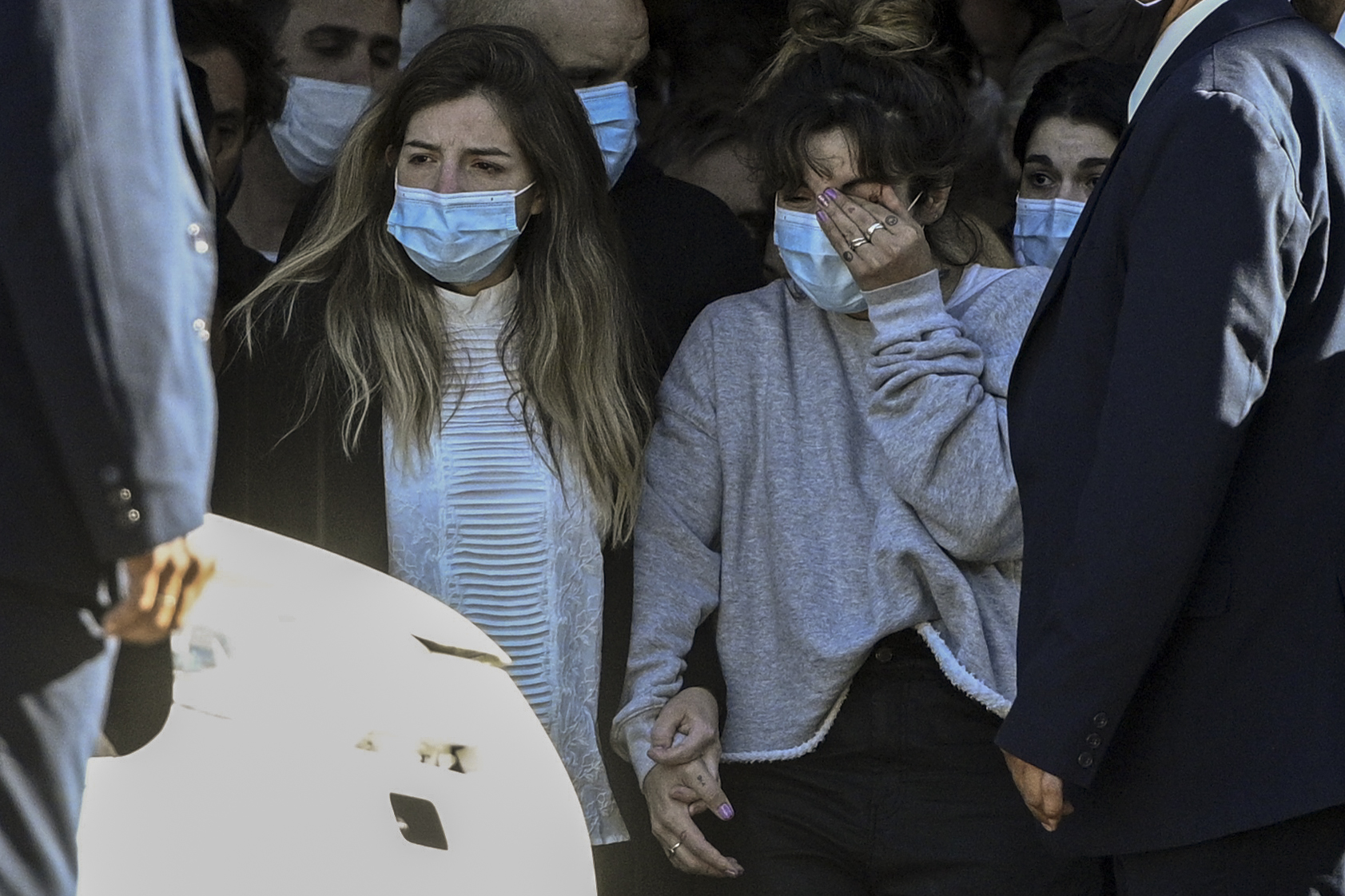 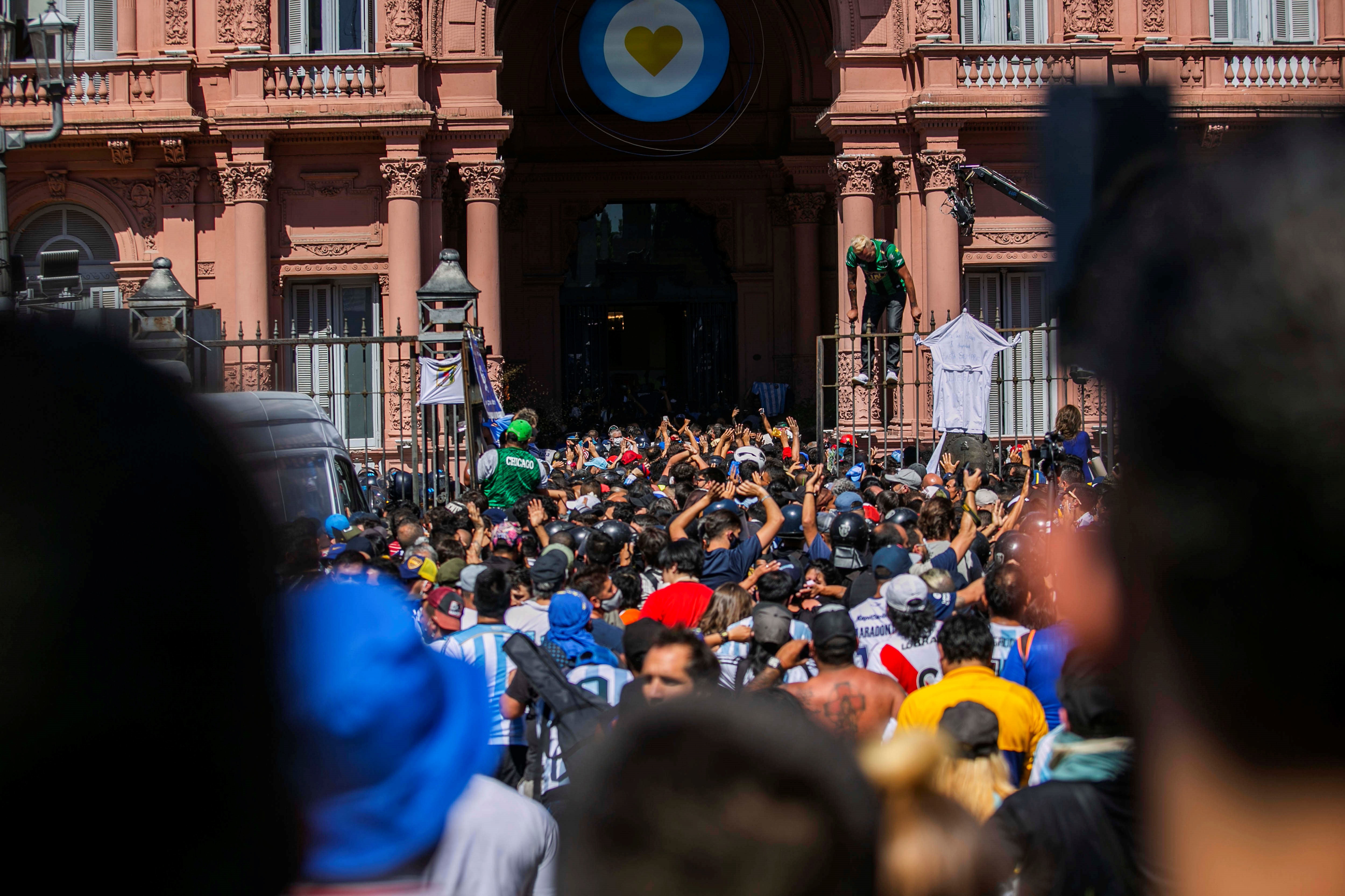 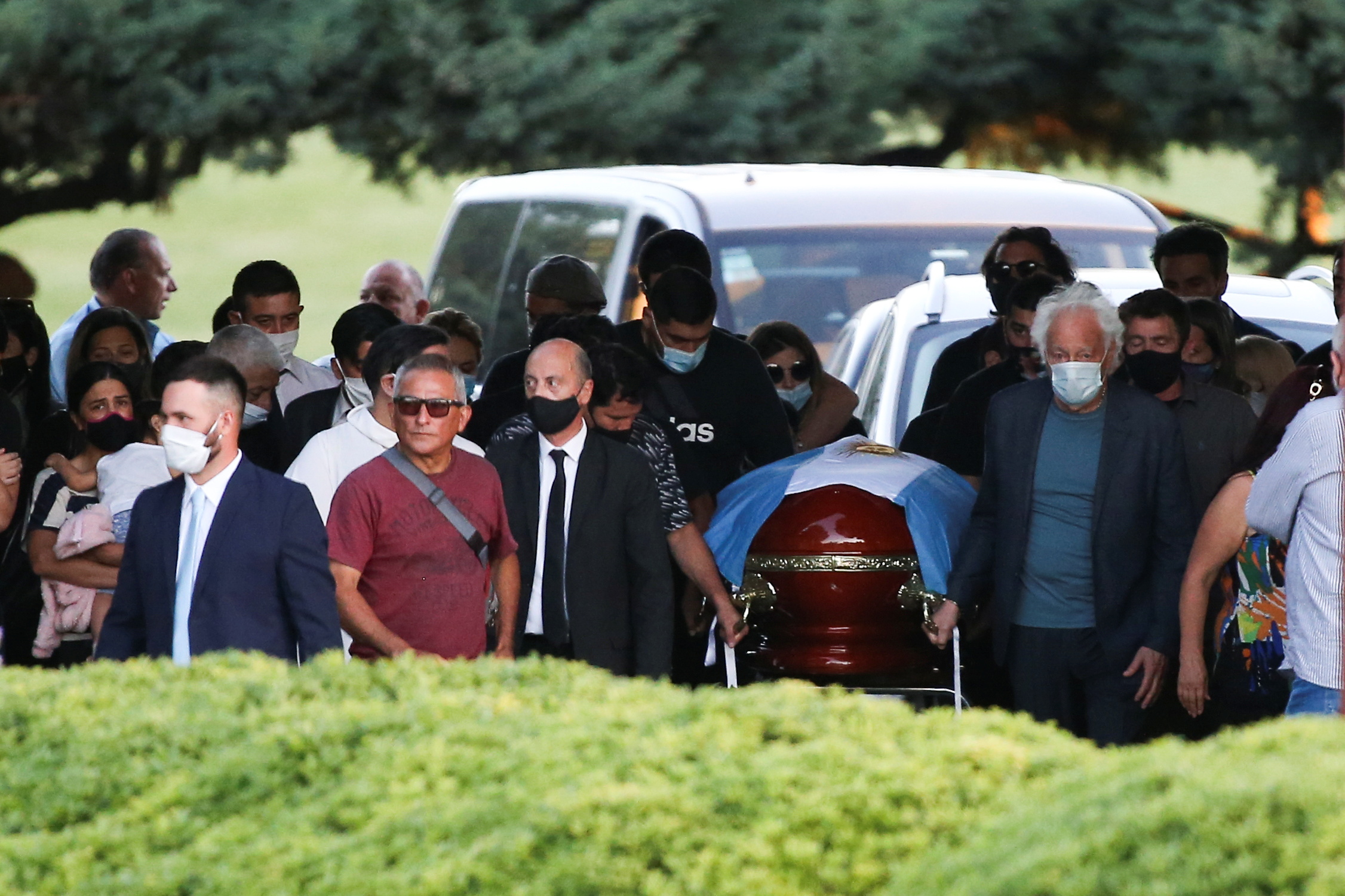 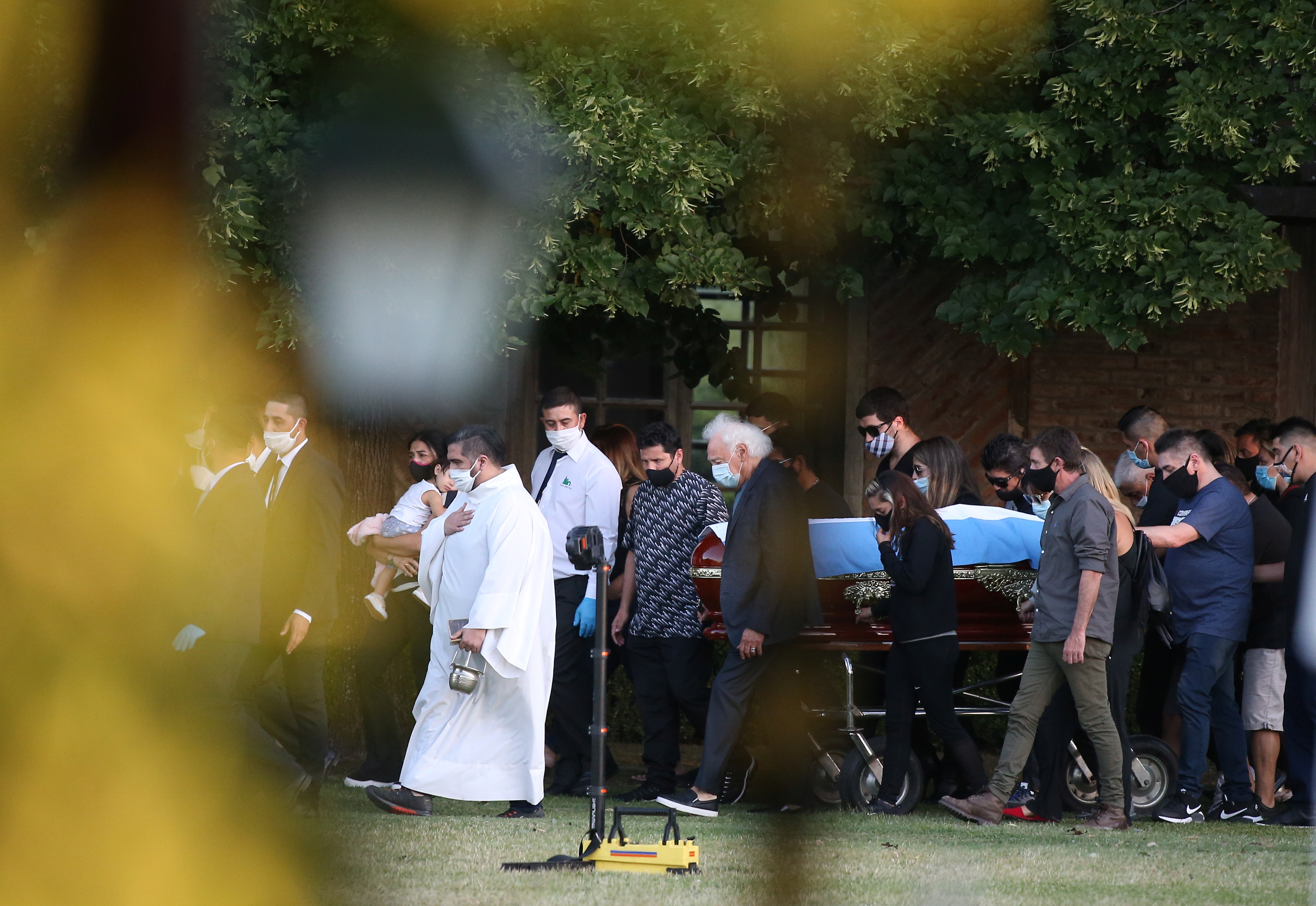 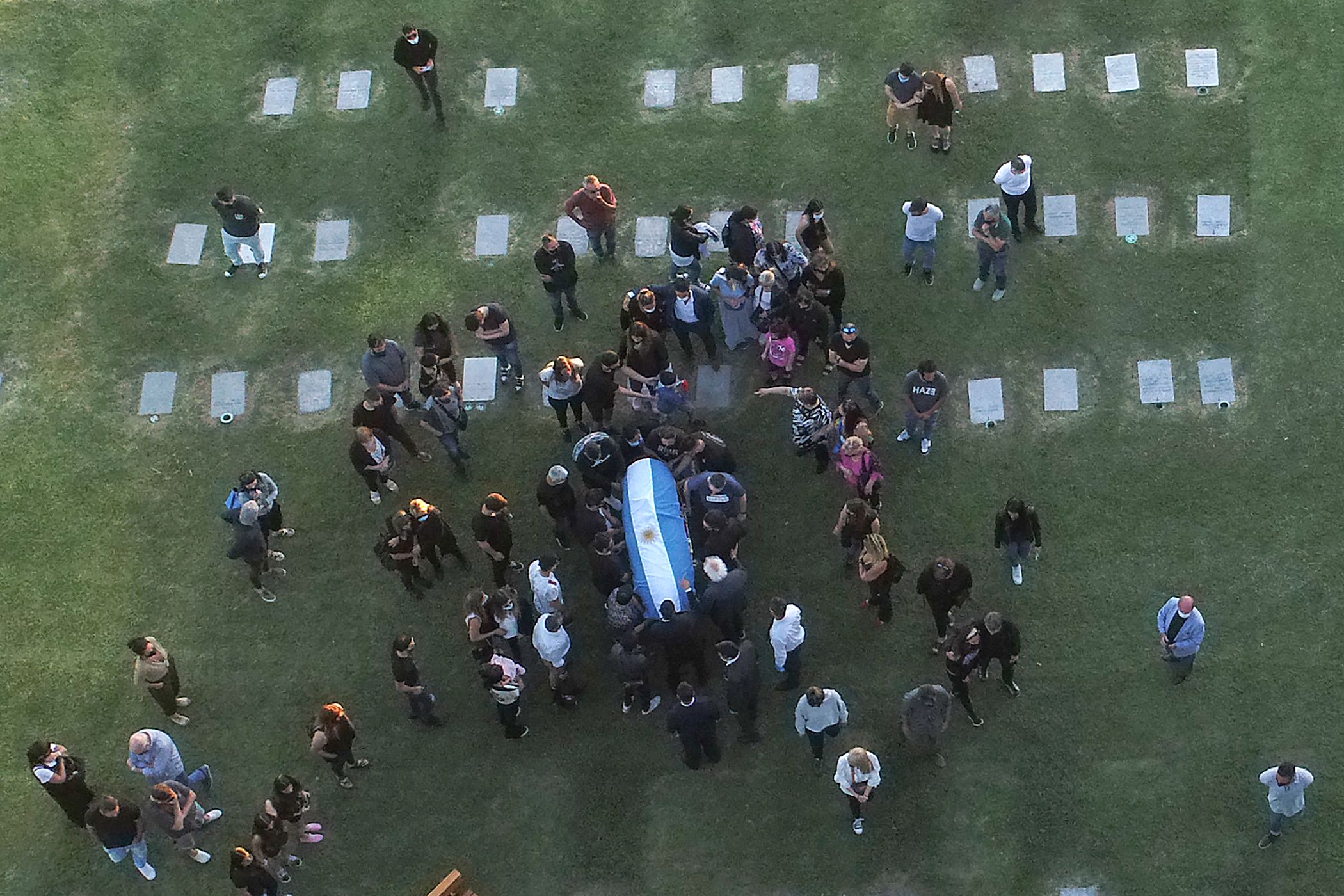 Girl, 6, faces losing her hand after her fingers are shredded in a meat grinder while playing at her parents' market