This is the shocking moment a delivery worker was caught on CCTV apparently spitting on a charity collection bag before posting it through a letter box.

The man was unaware he was being filmed at the time of the incident which took place in the Kirk Ella area of Hull on Tuesday.

The footage appears to show the man spitting on the bag before folding it in half and posting it through the letterbox. 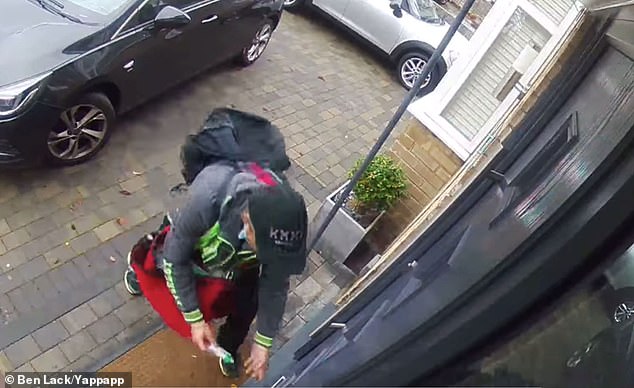 The man, who was wearing a face mask under his chin, appeared to spit on the charity envelope before posting it through the door in Hull

The man was wearing a baseball cap, dark trainers, black tracksuit bottoms and a grey and green hoodie,  had a face mask under his chin. He was also carrying a red shoulder bag.

According to Hull Daily Live, the charity bag was for the Tree of Hope children’s charity and distributed by SOS Clothes Ltd.

The couple, who did not wish to be named, said: ‘It’s awful.’

The householder said: ‘I don’t want to come across that I am saying he is spitting, just as a disclaimer, as he very well could just be blowing on it but that is still not good in this current climate.

‘I don’t want it to stop people using charity bags, but just want to make sure they are safe to use and wont cause any harm.’

Gill Gibb, Chief Executive Officer at Tree of Hope said: ‘When we received this complaint this morning we immediately passed it onto our distributor at SOS Clothes Ltd to investigate as we do with all issues which we take extremely seriously.

‘We train all our collectors to adhere to all Fundraising Regulator guidelines and Sam will contact you with the results of the investigation and what he intends to do.

‘Tree of Hope apologises for any distress caused.’

MailOnline has approached SOS Clothes Ltd for a comment.

Husband of Caroline Crouch hugs her mother before confessing to murder