Doctors wrongly assumed aspiring professional golfer, 25, who collapsed in student flat was on drugs and told his parents to ‘just slap him around the face’ before scan revealed ‘massive brain haemorrhage’

Doctors wrongly assumed an aspiring professional golfer who collapsed in a student flat was on drugs and told his parents to ‘just slap him around the face’ before a scan revealed he was suffering from a ‘massive brain haemorrhage’, his mother says.

Charlie Crosby, now 25, collapsed after watching a movie at his girlfriend’s home in Hatfield, Hertfordshire, in June 2019 and began being ‘violently sick’.

His mother Carole, 53, says she was called by a paramedic from East of England Ambulance Service who assured her ‘everything was fine’ but discovered Charlie ‘basically unconscious’ after rushing to the scene with her 54-year-old husband Lee.

She recalled medics repeatedly presuming he was drunk or on drugs, despite his girlfriend Alicia Medina Smith, 22, saying he was sober.

Charlie was eventually taken to Barnet Hospital in north London, where Carole says one member of the medical team told her to ‘shake and slap him’ while a doctor said they had ‘seen this 1,000 times before’.

But after taking him for a CT scan, medics discovered he had suffered a ‘massive brain bleed’ that left him only able to move the left side of his body and struggling to say more than one word at a time. 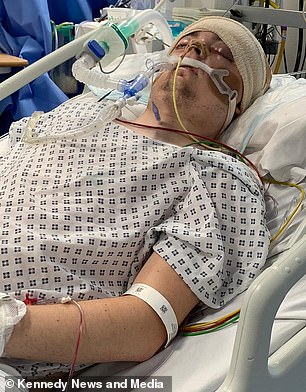 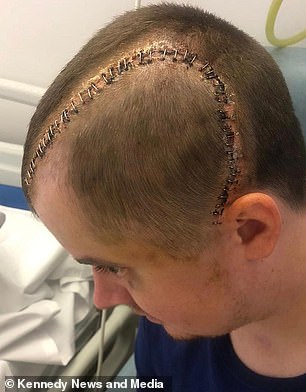 Charlie Crosby (pictured left, while on life support and right, in hospital after brain surgery), now 25, collapsed after watching a movie at his girlfriend’s home in Hatfield, Hertfordshire, in June 2019 and began being ‘violently sick’

Carole, now his full-time carer, and Lee believe it ‘took far too long to diagnose what actually happened’ after the young man was left partially paralysed.

Carole, from Borehamwood, Hertfordshire, said: ‘[Staff] made an assumption and they were wrong. It was so infuriating.

‘[Charlie] was in a coma for around six weeks. It was quite distressing to watch.

‘I’m sure they go to universities and see a lot of [students who are drunk or on drugs], but you can’t assume that that’s what everyone is doing.

‘I think Charlie’s going to need intense therapy for at least a couple of years, then he’ll need ongoing support for a long, long time, or forever.’ 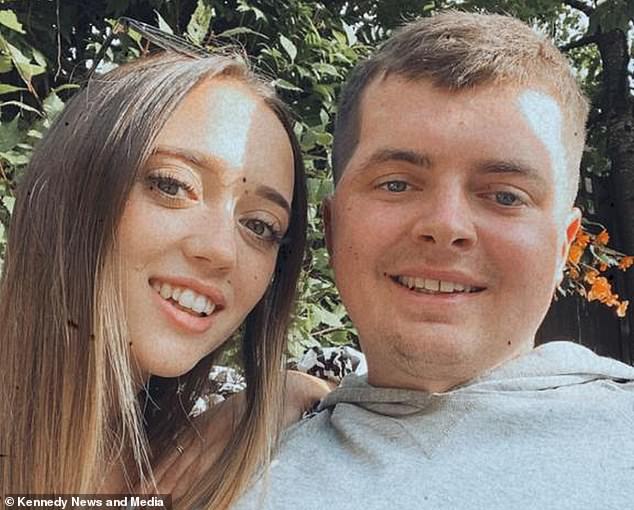 Charlie pictured with his 22-year-old girlfriend Alicia Medina Smith. They had both been watching a film at her student flat when he woke up at 4am and immediately collapsed on the floor, being violently sick and unable to speak

Charlie’s father, Lee, said: ‘My complaint was about it being presumed that he had taken drugs and or alcohol by the ambulance service then the hospital, and they took far too long to diagnose what had actually happened.’

After Alicia called 111, then 999, one paramedic is said to have arrived and phoned Carole to tell her ‘there was nothing to worry about’.

What are arteriovenous malformations?

An arteriovenous malformation (AVM) is a specific term used to describe a tangle of blood vessels with abnormal connections between arteries and veins.

This means that blood from the arteries drains directly into the veins – without stopping to supply the normal tissues in that part of the body with essential substances like oxygen and nutrition.

Over time this can lead to the normal tissues becoming painful or fragile.

It also means that the AVM gets progressively larger over time as the amount of blood flowing through it increases, and it can cause problems due to its size.

Finally, it may also mean that the heart has to work harder to keep up with the extra blood flow.

Some doctors describe an AVM as ‘a ring road that bypasses the high street of a town’.

Traffic (or blood) will use the bypass rather than the high street which suffers as a result.

The parents then rushed to the university flat, where they were met by an ambulance, and claim paramedics debated whether to take the seriously ill young man to hospital.

Carole said: ‘They assumed he was intoxicated or had taken drugs, even though Alicia had insisted he’d done neither.

‘I begged them to take him to hospital and I went into the ambulance with them.

‘He was put on to a drip and they took some bloods. After a while they transferred him into another section [of A&E] and said they’d “seen this all before. If you shake him and slap him around the face, he’ll come round”.’

She added: ‘My husband overheard one of the doctors say to a junior doctor “I’ve seen this 1,000 times before – he’ll come round. He just needs time”.

‘A period of time went by with us trying to rouse him and not getting anywhere, when one of the doctors came in and said “can I speak to Alicia?”

‘He spoke to her and immediately came back to say “I believe everything you’ve said, I’m sending him off for a CT scan”.’

The results revealed Charlie had a ‘massive bleed on his brain’ caused by an AVM, where blood is diverted from the arteries to the veins, causing them to burst.

He was placed in an induced coma and transferred to National Hospital for Neurology and Neurosurgery in London, where Carole praised the care he received.

She said: ‘When he came out, [the doctors in Barnet Hospital] told us he had a massive bleed on his brain.

‘I immediately said to the doctor “can drugs cause that, because that’s what we’ve been told?”. He just said “no, no, no”.

‘There wasn’t an apology. We were in total shock. In the meantime, while we were waiting, they put him into an induced coma.’

Over the next four weeks, Charlie came round from his coma and his condition stabilised.

In March last year, he was discharged from the rehabilitation facility he had been staying in due to coronavirus and returned home.

After four operations, Charlie has been recovering at home since last summer with his parents praying he’ll have an independent life one day. 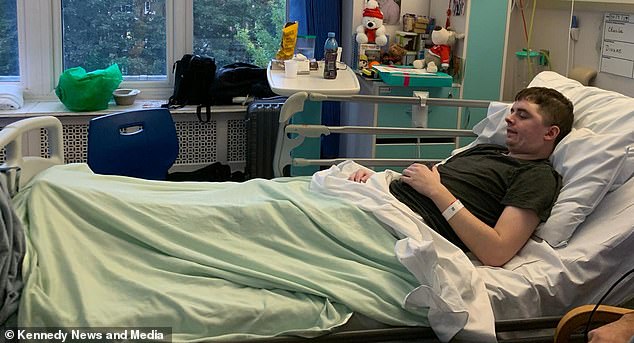 Charlie pictured after coming round from his induced coma in July 2019. He was able to move only the left side of his body and struggled to say more than one word at a time 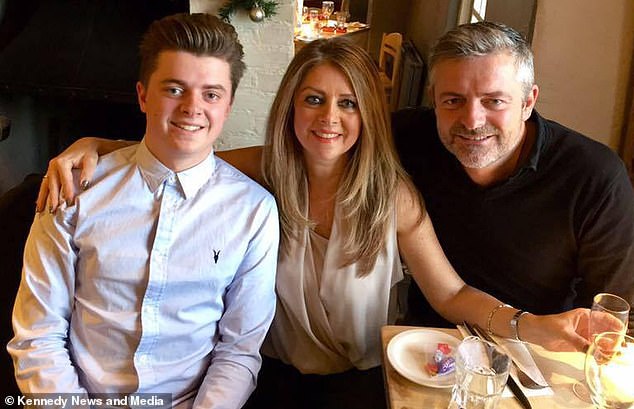 Charlie with his mother Carole and father Lee. Carole, from Borehamwood, Hertfordshire, said: ‘[Staff] made an assumption and they were wrong. It was so infuriating’

Charlie still requires two to four sessions of physiotherapy per week to help with his speech, movement and weight bearing, but his parents believe he faces a lifetime of support.

A spokesperson for the Royal Free London NHS Foundation Trust, said: ‘We always want to learn from the experiences of our patients and their loved ones and have been in contact with Charlie’s family to listen to their concerns, identify areas for improvement and say sorry for any distress caused during his care.

‘We would like to take this opportunity to wish Charlie and his family well for the future.’

A spokesperson for the East of England Ambulance Service NHS Trust said: ‘Charlie’s family have not contacted us to discuss the assessment our clinicians gave when caring for him.

‘We’d welcome them doing so to allow us to look into any concerns they may have.’

Charlie and his family have reached their £25,000 target on GoFundMe to get a dedicated specialist neurotherapy room at home to aid his rehabilitation.

Covid-19 will rumble on into 2021, Government reports reveal

Pentagon will be ‘unapologetic’ about using artificial intelligence