A dog walker was sucked into a drain pipe full of storm water when he tried to rescue his Jack Russell who vanished after jumping into a ‘puddle’.

Lacharoje Peema, 47, was walking Bubbles on a public footpath in Braunton, Devon when the dog disappeared into what looked like a puddle.

But the water turned out to be a storm drain and Bubbles was sucked into a large pipe running beneath the footpath.

Mr Peema then jumped into the drain to grab his dog but he too was sucked into the pipe. 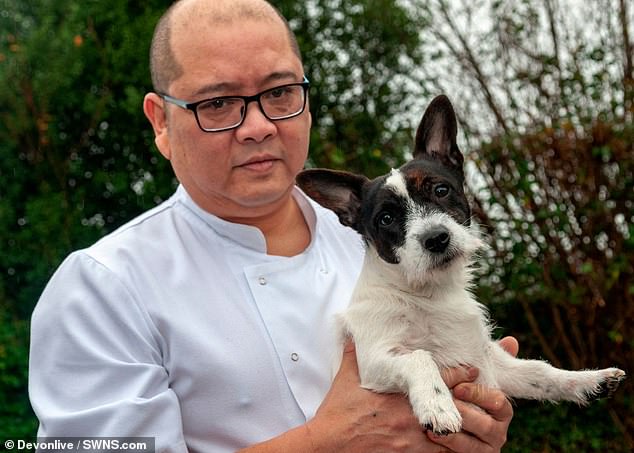 Lacharoje Peema was sucked into a storm drain in Braunton, Devon after his Jack Russell Bubble disappeared into a ‘puddle’

He said: ‘We were playing with the ball and it went down beside the footpath so Bubbles went to get it.

‘It looked like shallow water. She got the ball, looked up at me and then disappeared – she got sucked under the water.’

Mr Peema said he then ran over to the water where Bubbles had vanished and went down to try and save her.

He added: ‘Then I got sucked down into the pipe – the water was up to my chest, and I’m a tall guy.

‘I was screaming at this point. I had one hand down the pipe trying to find Bubbles and the other out of the water trying to keep me up.

‘I couldn’t find anything in the pipe and was convinced I’d lost her, so I came out of the water.’

Mr Peema then called a friend to come and help him look for Bubbles.

But, after a minute or two, he spotted her on the other side of the footpath beyond the River Caen which runs next to it.

He said: ‘While I was on the phone, she just popped up on the other side of the river.

‘I ran over and grabbed her. She had a cut on the top of her eye, but I was so grateful she was OK.’

Mr Peema took Bubbles, who he has had since she was six weeks old, to the vets after the incident on December 3, where she stayed for two days.

He added: ‘She was breathing in a strange way and we had no idea what was in her lungs.

‘She is out of the vets now but is still breathing funnily, I’m hoping the antibiotics will clear that up though.

‘It was the most scared I have ever been – I felt completely helpless. I love her so much.’

Now Mr Peema wants to warn others of the dangers in this area so the same thing doesn’t happen again.

He said: ‘There are a lot of families in this village with young children and dogs and people regularly walk in this area.

‘There are no signs or warnings in the area – how are you suppose to know it is even there?

‘It looks shallow and harmless but it is actually very deep. People need to know about it.’

Devon County Council, who are responsible for public rights of way in the county, have been approached for a comment.

Television producer who worked on The Jeremy Kyle Show hanged herself

Brave people of Moscow dare to speak out against Ukraine invasion

Inside story: Within the Capitol, the sound of the mob came first