Donald and Melania Trump stood with hands over hearts on Wednesday, leading White House staff in a moment of silence on the South Lawn to commemorate the 18th anniversary of the 9/11 terror attacks.

Standing like stone pillars as a buler played ‘Taps,’ the first couple devoted just a few minutes to the observance before heading to the Pentagon for a separate memorial to the Americans who died there on September 11, 2001.

At the U.S. military’s landmark headquarters, the Trumps laid a wreath while a U.S. Army officer read the names of the fallen and a sailor rang a bell for each life lost.

Remembrances of the deadly attacks are an annual skip in the nation’s heartbeat, focusing older Americans on the day the nation stood still in awestruck pain and sadness as thousands died in New York City; Arlington, Virginia; and Somerset County, Pennsylvania. 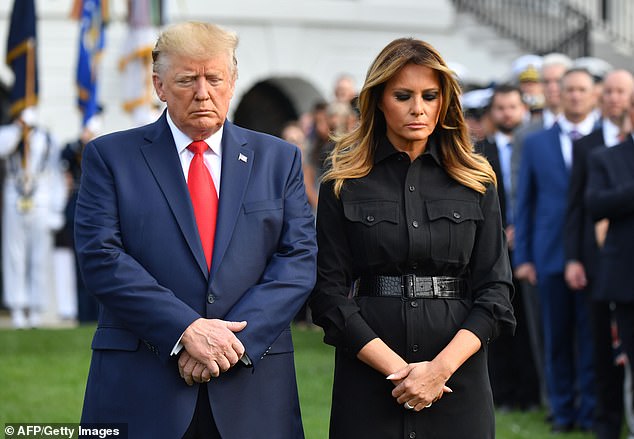 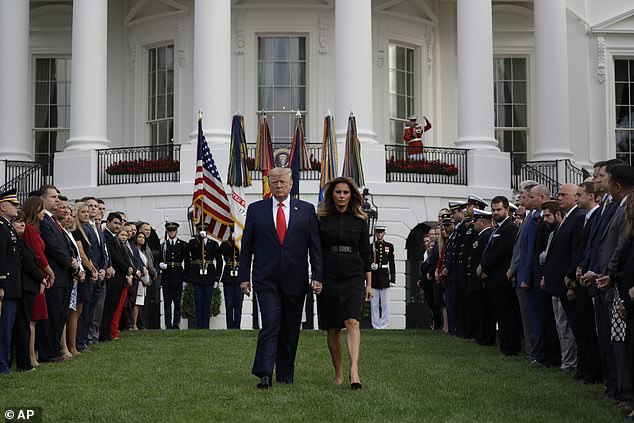 Guests at the White House for the brief, solemn ceremony included staff and military aides, survivors of the 9/11 attacks and family members of those who lost their lives 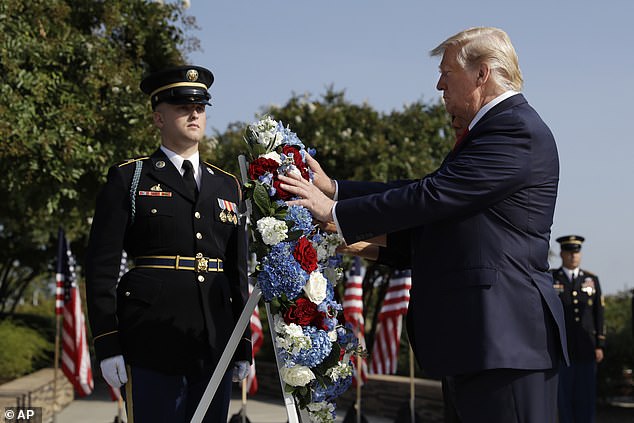 For millennials who came of age later, the yearly pause focuses attention on a ‘Never Forget’ historical blip that they know only through videos, school assignments and – for some – painful family histories.

‘Terror attacks can shake the foundations of our biggest buildings, but they cannot touch the foundation of America,’ Chairman of the Joint Chiefs of Staff Gen. Joseph Dunford said during a brief Pentagon speech.

‘These acts shatter steel. They cannot bend the steel of American resolve.’

Flags at 1600 Pennsylvania Avenue flew at half-staff on Wednesday, and military personnel assigned to the White House saluted.

Not a word was spoken.

The Trumps clasped hands as a bell chimed three times, once for each plane that a terrorist slammed into a World Trade Center tower in New York, and once for the aircraft another hijacked plowed into the Pentagon.

Vice President Mike Pence will speak Wednesday at a separate 9/11 memorial service near Shanksville, Pennsylvania, where martyred passengers of a doomed airliner took control of their own plane back from armed Islamic militants and forced it down rather than risk hitting the White House or the U.S. Capitol. 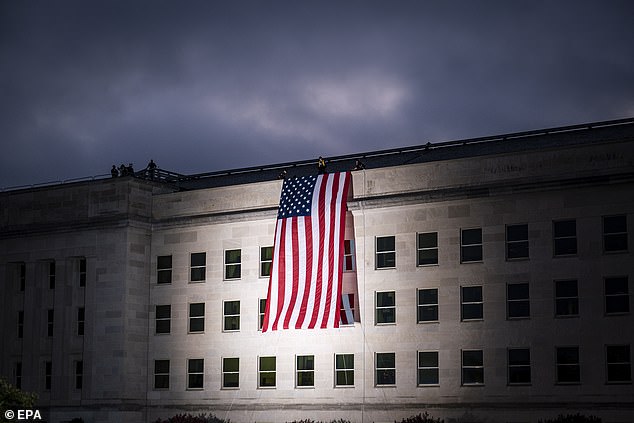 An American flag was draped over the Pentagon building at dawn on Wednesday; 184 people were killed there on September 11, 2001 when terrorists crashed an airliner into the building 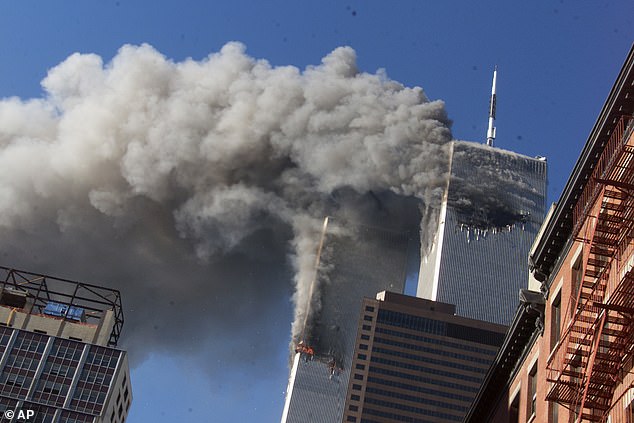 Smoke rose from the burning twin towers of the World Trade Center on September 11, 2001 after terrorists crashed their hijacked commercial airliners into the New York City skyscrapers 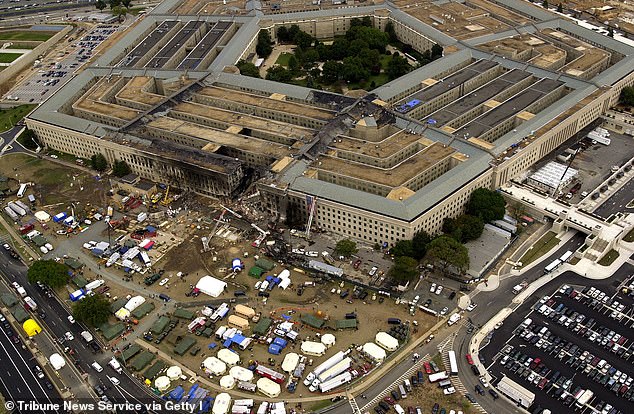 The deadly Pentagon crash site was visible for months after the 9/11 attacks in 2001; the terror attack caused extensive damage to the west face of the building

In New York a more expansive annual ceremony was marked by an extended reading of names of the nearly 3,000 people who died in the attacks.

The commemoration of the 18th anniversary of the Sept. 11 terror attacks has begun at ground zero with a moment of silence and tolling bells.

Eighteen years after the deadliest terror attack on American soil, the nation is still grappling with the aftermath at ground zero, in Congress and beyond.

The impact is visible from airport security checkpoints to Afghanistan, where a post-9/11 invasion has become America’s longest war.

Austrian government, the blueprint for Europe’s new wave of populism, fighting for its political life