Shocking footage shows a suspected drink-driver with two wheels missing trailing sparks along the motorway before smashing into a roadside barrier.

The BMW 5X was seen swerving down the M42 Southbound between junctions four and five before hitting a crash barrier at 8am on December 2.

The 24-year-old driving the vehicle – which was missing a front wheel and back tyre – admitted dangerous driving, disqualified driving and failing to provide a breath specimen, and was bailed to appear at Birmingham Crown Court for sentencing on January 3.

Footage of the incident was released by West Midlands Police, who uploaded it alongside a video showing a Ford KA driver narrowly avoiding oncoming traffic and parked cars in Great Barr, Birmingham. 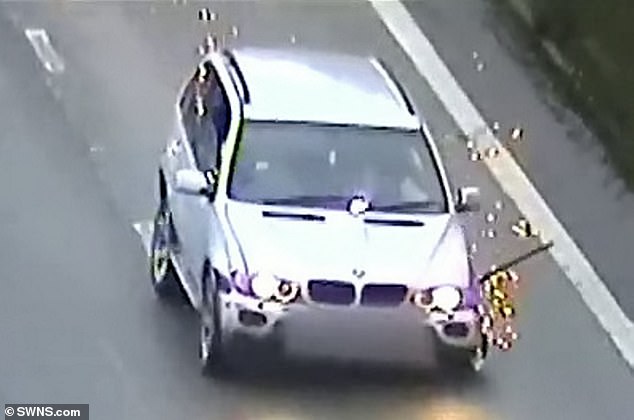 The incidents were published as the force continued its month-long ‘drink and drug driving Christmas clampdown’ throughout December.

Sergeant Jon Butler, from WMP, said: ‘We can only hope the message gets through that there are real dangers to getting behind the wheel while under the influence of drink or drugs. This is both to drivers and other innocent members of the public.

‘We have a zero tolerance approach and our officers are out there 24/7 to catch those who risk the safety, and lives, of themselves and innocent others.

‘Drink driving is unacceptable and we will catch and prosecute those who break the law.’ 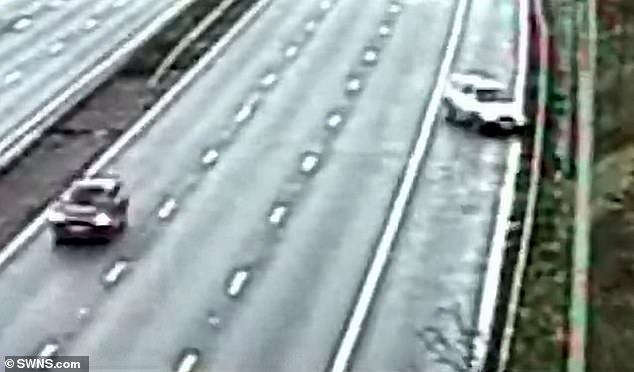 The 35-year-old Ford KA driver was first spotted by officers at around 10.45am on Sunday December 2.

He was driving without a front tyre and with the hazards lights flashing, swerving on both sides of the road and barely missing other cars.

He was found to have more than four times the legal limit of alcohol in his system for driving and admitted to drink driving, dangerous driving and having no licence or insurance.