The sunshine has at least made the first few days of the lockdown easier to bear, letting us spend time in the garden or go for a stroll.

But, by the end of the weekend, we may be better off indoors as temperatures plunge and snow showers are forecast as far south as Kent.

The current spell of settled weather, which started last weekend and was the first for six months, has seen temperatures reach highs of 19.4C (66.9F) in Rhyl, North Wales.

That was on Tuesday – the warmest day of the year so far. Today is likely to remain fine, dry and mild in almost all parts of England and Wales, with plenty of sunshine and temperatures of 14-15C (57-59F). 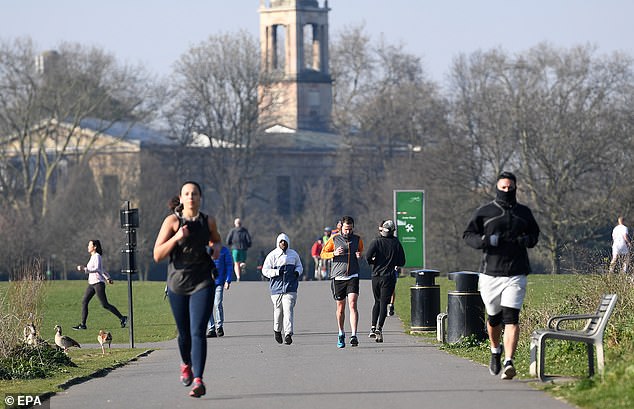 Even the wildlife seemed to be enjoying the bright weather – or maybe it was just nice for them to venture out and not find their world cluttered up with humans.

By the normally busy M8 on Glasgow’s eastern edge, a deer and a rabbit appeared to be making friends – or at least doing their best impersonation of Disney’s Bambi and Thumper.

However, people and wildlife will notice the change due to arrive through tomorrow and Sunday.

Met Office forecaster Bonnie Diamond said: ‘Saturday is due to be a fine day for most but Wales and northern areas are likely to be cloudier. 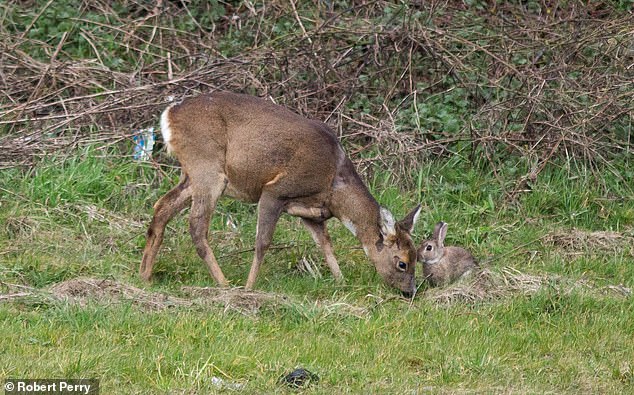 By the normally busy M8 on Glasgow’s eastern edge, a deer and a rabbit appeared to be making friends – or at least doing their best impersonation of Disney’s Bambi and Thumper 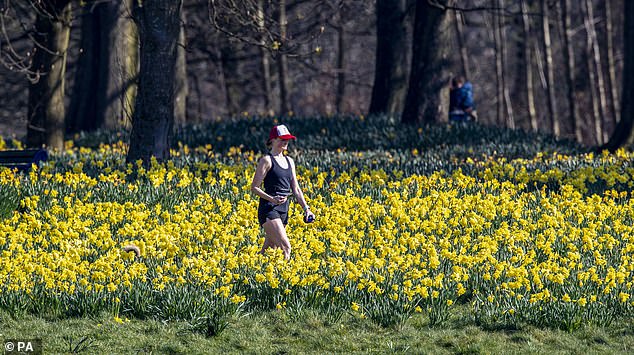 ‘Eastern coasts are going to feel quite cold and there’s a chance of showers. Some of these could fall as snow as far south as Lincolnshire.’

Miss Diamond said: ‘For most areas maximum temperatures will struggle to get into double figures. On the east coast, where daytime temperatures may only reach 6C (43F), wind chill could make it feel like 0C (32F).’ 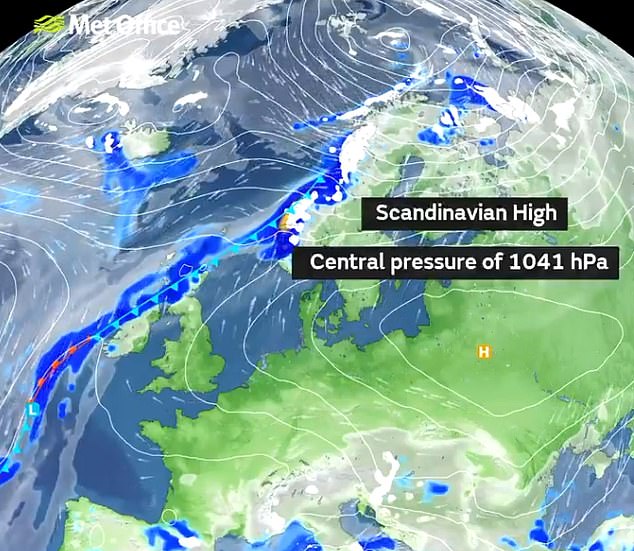 Snow showers could affect anywhere on the east coast of the country, as far south as Kent, Miss Diamond said.

The Met Office is also warning of the risk of frost over almost all of the coming nights.

The coldest is likely to be Saturday into Sunday, with temperatures as low as -3C (27F) or even -4C (25F) in rural areas.

In these uncertain times, it is a sight to lift the spirits.

And the National Trust believes that Britain should copy the Japanese tradition of celebrating blossoming trees.

As spring unfolds, it wants us to pause and enjoy glorious sights such as this canopy of cherry blossom in Hove Park in East Sussex. The trust is also calling on people to share images of blossom on social media for everyone else’s benefit. 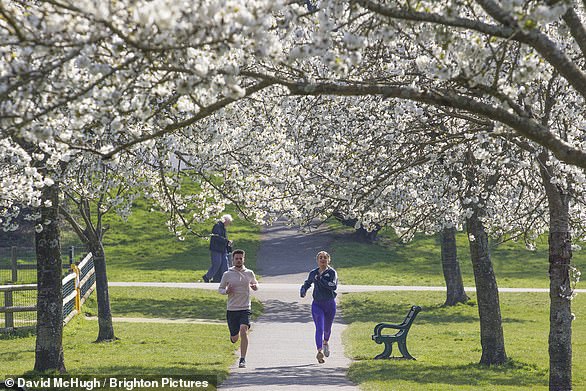 It is hoping to start a ‘blossom watch’ tradition in the UK to encourage people to notice a key part of the natural calendar.

The move – part of its campaign to connect us with nature – has been inspired by the Japanese tradition of ‘hanami’, celebrating cherry blossom as the first sign of spring. Hanami, which translates as ‘flower viewing’, began in 710AD.

Every spring, drunken hanami parties are held under flowering cherry trees across Japan to celebrate the season.

The trust wants people with trees in bloom in their gardens and on their streets to share pictures on social media using the hashtag #BlossomWatch and tagging their location.

Andy Beer, of the National Trust, said: ‘At a time when people are being asked not to travel, blossom trees can be seen on city streets, in gardens and in public parks. It’s a moment many can enjoy when taking the permitted daily walk, cycle or run.

‘We’re asking people to take pictures of it and share the joy with others who can’t see blossom for themselves right now.’