Victoria's environmental watchdog is trialling a new wireless technology that immediately detects when contaminants are dumped or accidentally spilt into the stormwater system that feeds into Melbourne's creeks, rivers and urban wetlands.

A network of wireless sensors have been placed along a 10-kilometre stretch of Merlynston Creek, from the industrial estates of Campbellfield to the residential area of Pascoe Vale South, because of the shocking environmental record along the waterway. 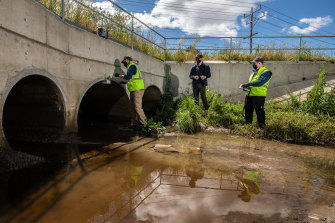 The network could eventually allow the Environment Protection Authority to track pollution back to its source and help stage clean-up operations to prevent contamination from spreading further downstream or into the bay.

The trial, which has been running for nearly nine months, has already revealed that "pollution events" in waterways are far more common than previously estimated, and the regularity and timing of some incidents – often on Friday afternoons – suggested they were acts of illegal dumping.

"For the EPA, in terms of compliance and enforcement for people doing the wrong thing … these are great tools," said EPA scientist and project leader Simon Sharp.

"We've used the data in terms of the recurrence of particular types of pollution, which seems to happen on a Friday in the late afternoon, to time the response [of EPA inspectors]."

At the northern tip of the test zone is Foden Reserve, a deceptively lush-looking wetland that has become one of the most contaminated green spaces in the centre of one of the most heavily industrialised precincts in the city. 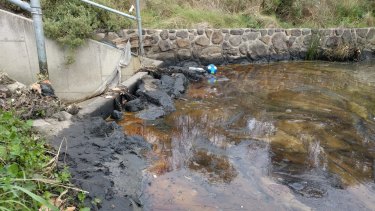 Under the current system, the EPA relies on reports from members of the public and industry to identify suspected pollution events.

Data from the devices has already been used to help the EPA stage an inspection that resulted in a fine, although the regulator declined to provide details about the enforcement action for operational reasons.

The trial is being run by EPA in co-operation with commercial environmental consultancy group Bio2Lab, which designed the sensor technology. 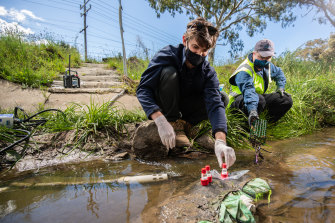 There are nearly 700 constructed wetlands and stormwater catchments in Melbourne, which were built to manage rain run-off and flooding and have since become popular recreation spots and wildlife reserves.

Some like Foden Reserve are designed to act like environmental "kidneys", trapping and filtering pollution, but they can be overwhelmed by serious pollution events and large rainfalls. Many of the wetlands are now heavily contaminated.

Among the most damaging environment incidents along the Merlynston Creek system were a series of industrial blazes at plastics recycler SKM in 2017, Campbellfield Industrial Services in 2019 and battery recycler MRI in 2020.

Howard U. Engineering Student Who Once Rapped About Escaping Baltimore's Violence Is Fatally Shot