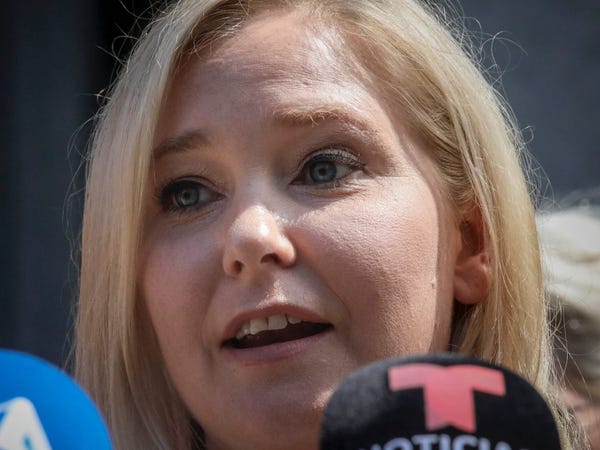 Virginia Roberts Giuffre, a woman who has accused Jeffrey Epstein and Ghislaine Maxwell of underage sex trafficking, tweeted a series of slogans and a graphic related to QAnon ahead of a scheduled document drop int he case.

An appeals court in New York is preparing to unseal hundreds of pages of Maxwell's testimonies about her relationship with Epstein, the disgraced financier and convicted sex offender.

They are due to be published by 9 a.m. New York time on Thursday.

Maxwell, who is accused of procuring underage girls for Epstein, recently lost a legal battle to keep her depositions from being used in Giuffre's criminal case against her.

Ahead of Thursday's document unsealing, Giuffre shared an graphic of a young girl and a teddy bear inside a giant "Q" — with the words "We've Awoken, Stop Pedophilia" inside.

Giuffre in her tweet added hashtags that had been co-opted by QAnon followers, such as #TheGreatAwakeningWorldWide and #SaveTheChildren.

On Wednesday night, Giuffre also reshared a post containing the hashtags #WWG1WGA — an acronym for the QAnon slogan, "where we go one, we go all" — and #MAGA, the Trump campaign slogan that's short for "Make America Great Again."

Social media companies have been trying to crack down on QAnon-related content, but members have been circumventing bans to keep the movement active.

Twitter, where Giuffre shared her messages, announced in July that it would begin cracking down on QAnon-related accounts and messages.

However, The Washington Post reported in early October that there were still tens of thousands of active Twitter profiles that referenced QAnon in their profiles.

Campaign to remove Baroness Scotland descends into a race row