Europe has seen a fall in coronavirus infections for the first time in three months.

There were 1.84 million cases recorded last week, a ten percent decline on the previous seven days, with much of the continent now under new national lockdowns.

Europe, which saw its total number of infections soar past 15 million on Tuesday, accounted for nearly half of all the world’s cases.

WHO data today showed that deaths continue to climb amid the second wave, with more than 29,000 fatalities registered across the continent – an 18 percent spike on the previous week.

There were 1.84 million cases recorded last week, a ten percent decline on the previous seven days, according to data released by the WHO

In total, nearly four million cases of the novel coronavirus were registered worldwide during the week ending Sunday, and almost 60,000 people died from the disease during the same period.

The WHO data showed that Austria reported the sharpest increase in new cases on the continent last week, marking a 30 percent hike from the previous week.

The Americas, which is the second worst-hit region, meanwhile continued to show surging numbers of cases and a hike in deaths from the novel coronavirus.

Case numbers across the region grew by over 40 percent, with more than 1.45 million new cases registered, and deaths were up by 11 percent, with over 19,100 new fatalities during the seven-day period.

More than one million of the new cases were seen in the United States, which has counted nearly 11 million cases since the beginning of the pandemic.

The only region that saw a decline in the number of new cases and deaths last week was Southeast Asia, WHO said.

Worldwide, more than 1.3 million people have died of Covid-19 and over 55 million have been infected with the virus since it first surfaced in China late last year, according to a tally from official sources compiled by AFP.

Based on latest reports, the countries with the most new deaths were the United States with 1,313 new deaths, followed by France with 1,219 and Italy with 731. 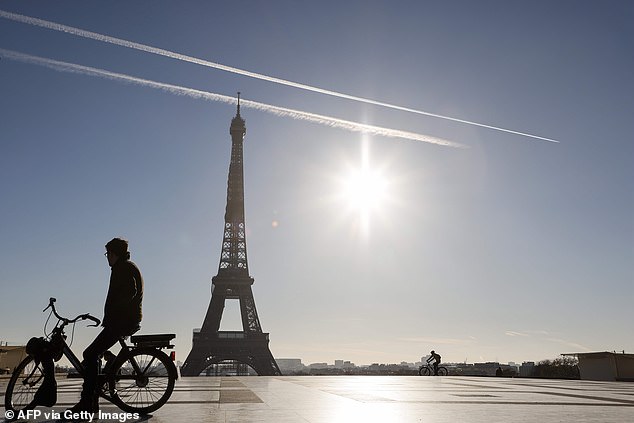 A man rides an electric bike in front of the Eiffel Tower, on the Trocadero plaza in Paris on November 18, 2020, during a second lockdown in France aimed at containing the spread of Covid-19 pandemic, caused by the novel coronavirus

The country with the highest number of deaths compared to its population is Belgium with 124 fatalities per 100,000 inhabitants, followed by Peru with 107, Spain with 89 and Argentina with 80. 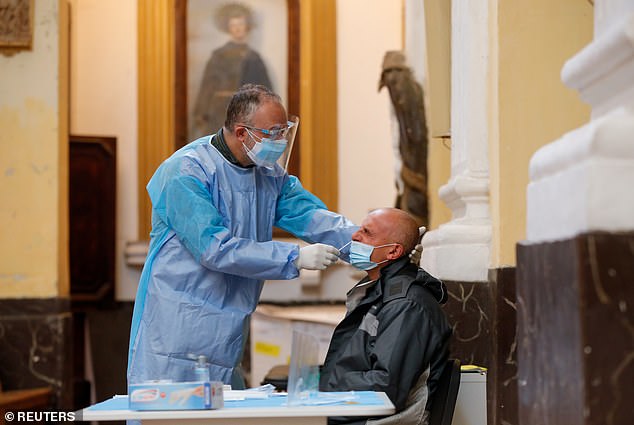 A medic takes a swab from a man in the coronavirus disease (COVID-19) testing centre at San Severo fuori le mura church, in Naples, Italy November 18, 2020

As a result of corrections by national authorities or late publication of data, the figures updated over the past 24 hours may not correspond exactly to the previous day’s tallies.

Lee Westwood 'crying' after he scoops £28,000 as his rank 66-1 outsider horse Yorkhill stuns rivals to win at Newcastle