China is not sneering at us any more: Blockading families in their homes, forcing children to wear hazmat suits, robot dogs patrolling the streets… the new Chinese Covid crackdown is brutal – as life in the despised West is back to normal

Residents peered nervously from windows of tall apartment blocks, as the figures below erected the fencing across the entrances to their skyscrapers, caging them into their homes.

This is the Pudong district of Shanghai, deemed a high-risk Covid area in need of what the city authorities call ‘hard isolation’, and where residents say they are being treated like animals.

‘Could we also put fences around the homes of Shanghai leaders?’ asked one, as their photos and videos coursed through Chinese social media, pursued by the Communist Party’s ever-zealous censors.

The story is the same in the rest of Shanghai’s districts. One video shows more hazmat-suited workers drilling the doors shut at a restaurant in the city to prevent those inside from leaving. Two elderly men look out in disbelief.

Dragged away: Authorities in hazmat suits manhandle a resident in Shanghai

Phone cameras caught still more PPE-wearing thugs slapping and shoving boys and girls into a van to be taken to one of the city’s 100 compulsory quarantine centres that await all those testing positive.

Sometimes the scenes have bordered on the surreal.

One video posted on Monday showed young children arriving at school clad in all-encompassing white hazmat suits of their own. They lumbered through the school gate in unwieldy fashion, like tiny Michelin Men, waving awkwardly at the camera.

This is the face of China’s extraordinary — and barbaric — zero-Covid policy. For many of Shanghai’s residents, the draconian lockdown has lasted more than three weeks. Countless numbers have been confined to their homes, under strict government instruction to isolate even if they don’t have the virus.

Neighbourhoods are divided into three categories based on the risk of transmission. Those in the first category endure the strictest Covid-19 controls and have just been hit with heightened measures. The 2 m-high green fences now block entrances to residential housing in many of these areas.

It appears they are designed to stop those living inside a complex that has a reported Covid case from leaving their homes — whether or not they have the virus. Under China’s unbending controls, anyone over the age of seven who tests positive — even if they are asymptomatic or have a mild infection — must be isolated in centralised quarantine facilities.

Despite evidence that the Omicron variant is less deadly than the original strain, China persists in its leader Xi Jinping’s determination to eradicate the virus completely — a policy that is now devastating its economy, and has even prompted Western stock markets to tumble.

While the focus has been on Shanghai, which has so far recorded 400,000 cases and 138 deaths, all but 13 of China’s richest 100 cities have imposed some form of quarantine restriction, and the intensity is increasing.

The capital, Beijing, has launched mass testing for some 3.5 million people who live and work in the city’s biggest district of Chaoyang, after 26 cases were reported over the weekend.

Schools and gyms are closing down, while vegetables, toilet paper and instant noodles are sold out in the city’s supermarkets as people stockpile, fearful of a lockdown as harsh as Shanghai’s.

That city’s outbreak is China’s worst since Wuhan, and it has been like a virtual ghost town since going into lockdown in early April.

Chinese social media has exploded with anger in a way not seen since the early days of the pandemic in Wuhan, with censors struggling to eliminate the criticism. 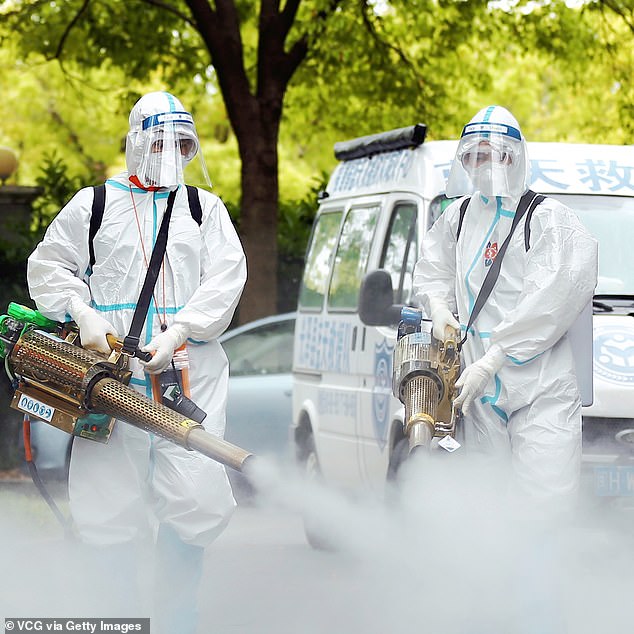 Members of the Blue Sky Rescue Team disinfect a residential community during the phased lockdown triggered by the COVID-19 outbreak on April 24, 2022 in Shanghai, China

At nightfall, Shanghai’s districts echo with the sound of pots and pans being banged in protest.

This time, the concern is not predominantly with the virus itself, but with food shortages.

Those allowed to visit supermarkets have reported empty shelves.

For those unable to leave their homes, commercial food services and government-provided packages are unreliable.

People have reported waking up in the early hours of the morning to order supplies online, only to be told that deliveries have already been suspended for the day. Since Shanghai’s tap water is not drinkable, deliveries of bottled water are vital.

The food scarcity has even driven some to forage roadside plants — leading to reported cases of food poisoning.

There have been harrowing online pleas for help with medicine and food as a video emerged of residents of a high-rise apartment yelling from their windows: ‘We’re starving.’ Another showed people fighting over food.

One flashpoint has been the conditions in Shanghai’s mandated quarantine centres.

From these facilities have emerged reports of overflowing lavatories, cold showers and little privacy. In one, 4,000 people were living in cubicles next to each other in a vast exhibition hall, with no showers. 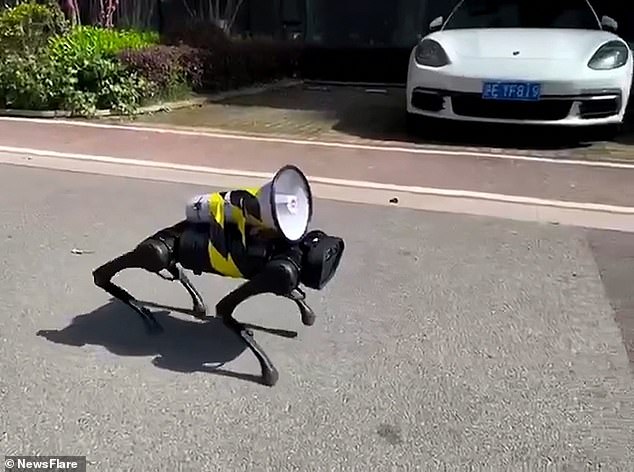 On the prowl: A robotic dog roams the streets of Shanghai barking orders

There was a national outcry over a video showing crying children separated from their parents and crammed into metal-barred beds.

Elsewhere, a man who had lost the will to live threatened to throw himself off the indoor balcony of one crowded quarantine facility.

Meanwhile, thousands of Chinese social media users unable to leave their apartments have shared stories of people with life-threatening illnesses who have been unable to get treatment.

Trucks bringing supplies into the city have their cab doors sealed, to prevent the driver getting out. Plastic buckets are handed to them through the windows should they need the toilet.

A harrowing six-minute video, entitled Voices Of April, contains audio snippets of anger and grief as a drone-camera slowly moves over the city.

The snippets include the cries of babies separated from their parents in quarantine, pleas for food and urgent medical care — as well as the cold indifference of officials.

It went viral, but censors eventually deleted it.

Other social media mocked the authorities by posting images from the movie Night Of The Living Dead, suggesting China’s business capital of 25 million people was experiencing its own zombie apocalypse.

That analogy seemed all the more fitting on Monday as the city was lashed with heavy rain and winds, sending litter bins flying across the empty roads.

Despite the clamours for relaxing lockdown measures, President Xi insists: ‘Prevention and control work cannot be relaxed’ and ‘Persistence is victory’.

Many Chinese epidemiologists regard that as lunacy, but it is Xi’s lunacy and in today’s China, the ‘emperor’ cannot be questioned.

Complete ‘victory’ over the virus has become a key part of the cult of Xi. It underpins the Communist Party’s triumphalism and Xi’s boasts of China being superior to the bungling West.

In the parallel world of official propaganda, China’s state-owned media insists there is ‘faith in zero-Covid policy’ and ‘Residents’ lives made easier’. Such claims are widely ridiculed.

It is hard to think of any other country, even among autocracies, that could impose China’s combination of claustrophobic surveillance and casual brutality towards those who disobey the party.

The surveillance has reached new extremes, including the deployment of robots and drones to herd Shanghai’s desperate population. 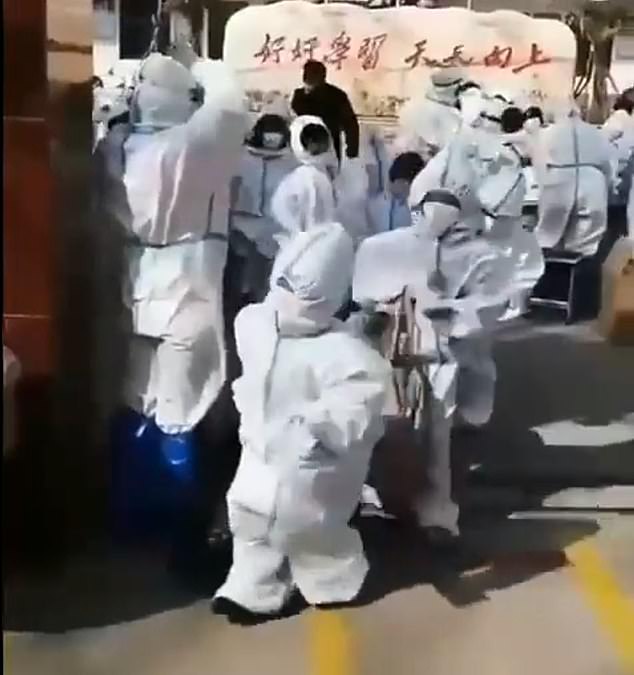 The robots include a dog called Preserved Egg (named after a famous Chinese dish), about the size of a terrier. It roams Shanghai’s deserted streets and apartment corridors barking orders to stay inside and rousing residents when it is their turn to come downstairs for yet another round of compulsory testing.

On Monday, there was a revolt at the city’s famous Fudan University, which has been festooned with cameras to enforce lockdown rules.

‘It’s a university, not a concentration camp’ . . . ‘Against surveillance! Against bureaucracy! Against micro-fascism’ were just some of the banners that went up on campus (and spread on social media) after more white suits were photographed installing cameras outside the female toilet.

Shanghai’s stock exchange saw its biggest fall in two years on Monday, tumbling by more than 5 per cent.

That was partly out of the fear that Beijing may soon follow Shanghai into lockdown.

The economic cost of endless and severe lockdowns is undeniable. Even Li Keqiang, China’s premier and the man nominally in charge of economic affairs is sounding increasingly rattled, talking about the ‘greater uncertainties and challenges’ ahead.

China has been spooked by the way Covid-19 has swept through Hong Kong, where death rates reached the highest in the world.

Like in Hong Kong, vaccination rates among the elderly are low in China — only half the over-80s are fully vaccinated and just a fifth are boosted.

Add to that the lower efficacy rate of Chinese vaccines and China is highly vulnerable, even though the fast spreading Omicron variant is less deadly.

The Communist Party is becoming increasingly prickly, and as always is on the search for foreign conspirators to blame.

Officials have accused the U.S. of ‘weaponising’ the crisis, after the State Department ordered non-emergency staff to leave its Shanghai consulate — a move that was motivated more by China’s measures to control the virus than by the virus itself. 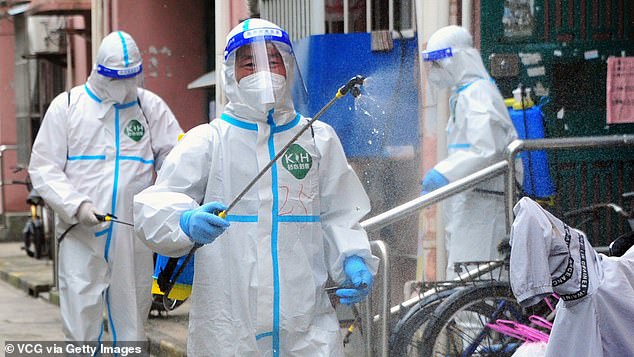 The U.S. announcement cited the risks of parents and children being separated — the forceable removal of Covid-positive children to quarantine has been one of the most controversial of Shanghai’s lockdown practices.

One widely-shared social media post asked, not unreasonably, whether the zero-Covid policy was not causing far more harm than the virus itself.

Too much is at stake for him, especially this year, when he is expected to be anointed by the party as leader for life.

Xi has boxed himself into a corner. He is playing a large, expensive and increasingly futile game of Whac-A-Mole. It is hard to see how zero-Covid can be sustained. It is under strain as never before, and it is in Shanghai that its future is likely to be determined.

Ian Williams is author of Every Breath You Take: China’s New Tyranny, published by Birlinn.

Dr. Phil responds to people's excuses not to get vaccinated: 'Are you f***ing kidding me?'