The show posted a video on the social media platforms on Tuesday night with the caption "Chinese whistle-blower to Tucker: This virus was made in a lab & I can prove it." The posts feature a segment in which Carlson interviewed Li-Meng Yan, a Chinese virologist who claims that the virus "is not from nature." 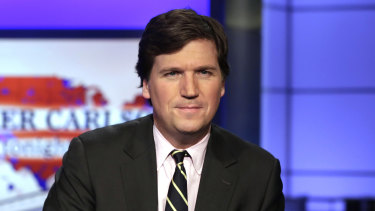 Tucker Carlson has spread false information on the origins of COVID-19.Credit:AP

Intelligence agencies have been sceptical that the pathogen can be conclusively linked to a lab. Scientists who have studied the genetics of the virus agree that it began as a bat virus and likely evolved to jump to humans. Many have dismissed theories that the virus infected researchers in a lab accident.

On Tuesday night, Facebook and Instagram placed screens of varying levels of opacity over images of the "Tucker Carlson Tonight" video along with a "false information" warning while also allowing users an option to watch it. A similar post on Twitter, which has suspended Yan's account, was untouched as of Wednesday afternoon.

On Wednesday, Carlson's show updated the captions to say that "Facebook is trying its best to censor this video." In a separate Facebook post, Carlson's team wrote that Facebook "is working hard" to prevent people from viewing the interview segment and vowed to address the situation on Wednesday's show.

Earlier this week, a report about the virus, co-written by Yan, was published by two nonprofit organisations, the Rule of Law Society and the Rule of Law Foundation, both are linked to Steve Bannon, the former adviser to President Donald Trump who was recently charged with fraud, according to The Daily Beast.