Facebook has pushed back against US President Joe Biden’s claim that social media networks were enabling the spread of misinformation about vaccines, saying it won’t take the blame for the administration missing its target to get 70 per cent of Americans inoculated by July 4.

Biden said on Friday, US time, that social media networks are “killing people” by allowing the spread of misinformation about coronavirus vaccines, saying that “the only pandemic we have is among the unvaccinated” after he was asked about his message for tech companies. 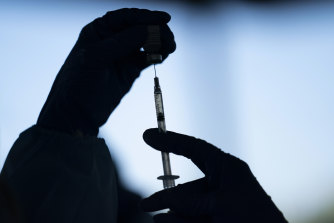 Facebook has been criticised for allowing anti-vaccination sentiment to thrive.Credit:AP

After the social media giant initially responded by saying that the administration’s assertions were “not supported by facts,” Facebook’s vice-president of integrity Guy Rosen responded on Saturday, using customer surveys and other actions the company has taken as defence. Among them include Facebook data showing 85 per cent of US users have been or want to be vaccinated, and claims the social media giant’s efforts have pushed vaccine hesitancy down by 50 per cent.

“At a time when COVID-19 cases are rising in America, the Biden administration has chosen to blame a handful of American social media companies,” Rosen said. “Facebook is not the reason this goal was missed.”

Facebook has previously said it removed millions of posts from its core product and the photo sharing app Instagram for violating its policies, and stepped up enforcement against repeat offenders. The administration “clearly” did not believe that was a sufficient response to a “life or death issue,” the White House said on Friday.

To detail Facebook’s actions, Rosen said more than 18 million “instances” of COVID-19 misinformation were removed since the start of the pandemic. The social network also labelled and cut the visibility of more than 167 million pieces of content debunked by its fact-checkers.

Still, anti-vaccine activists took to social media platforms at the beginning of the pandemic, where they dripped anti-science scepticism into Facebook groups and Instagram stories and posts. Algorithms rewarded content that elicited strong emotional reactions, further amplifying the misinformation ranging from the toxicity of the vaccines to infertility risks.

Social media influencers, legitimised by their sizeable follower counts, had a full year to sow doubt about COVID vaccines before Facebook took significant action. They’ve exploited public confusion and mixed messaging from government and health officials on everything from masks to vaccine side effects and safety. Facebook’s official stance was that it doesn’t ban posts unless they “cause imminent harm” – a threshold the social network said vaccine misinformation only crossed months into a global inoculation campaign.

So far, only 55 per cent of Americans have received one dose of the vaccine, and the pace is falling despite White House efforts to encourage more people to get the shot, while countries including the UK and Canada have accelerated inoculations efforts.

“We employed similar tactics in the UK and Canada, which have similar rates of Facebook usage to the US, and those countries have achieved more than 70 per cent vaccination of eligible populations,” Rosen said. “This all suggests there’s more than Facebook to the outcome in the US.”

Meanwhile, Twitter took a different approach in its response.

“As the COVID-19 pandemic evolves around the world, we’ll continue to do our part to elevate authoritative health information,” it said in a tweet.

This Day in History: Feb. 9

NYPD honors cops who died from illnesses related to 9/11