THE FALL in Covid cases is slowing and there and there may be a slight uptick in London.

England's biggest virus infection survey has shown very early signs that the outbreak is growing again in some parts of the country, possibly because people are letting the guard down. 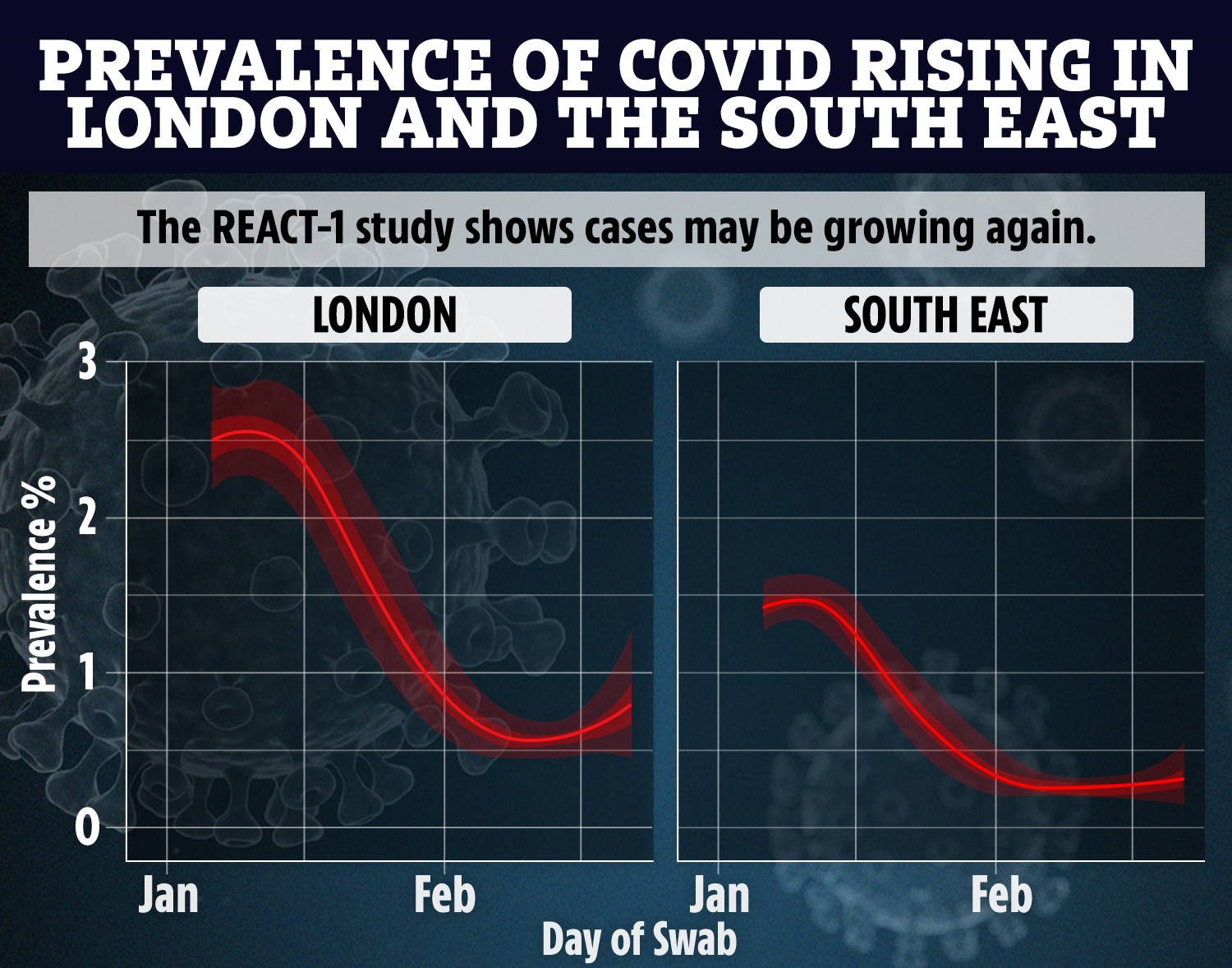 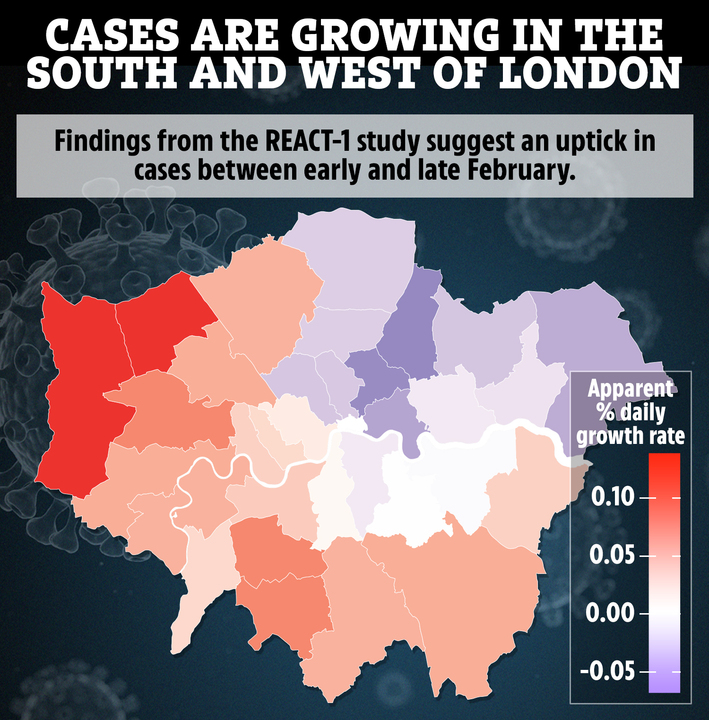 Infections seem to be rising in the west and south of London, as well as the northern parts of the South East.

They are still declining in the north and east of London, however.

Researchers at Imperial College London who are conducting the REACT-1 study pleaded with the public not to relax too soon while vaccinations are still being given, with almost 21 million doses given out so far.

Professor Paul Elliot, director of the React study and chair in Epidemiology and Public Health Medicine, Imperial College London, said: “We do need to keep going and pay attention to the public health measures.

“People might think they can relax because the vaccine programme is going so well.

“But there is still a lot of virus out there and if people change their behaviours a little bit, then they're going to be more at risk of getting infection.

“We want to protect as many people as possible, and at the moment there are a lot of people who haven't been vaccinated. But they will get vaccinated very shortly.

“So here is this window where if we can just all stick together, and pay attention to the lockdown rules, then hopefully we can minimise the number of infections before everyone who needs or wants a vaccine, gets a vaccine.”

Steven Riley, professor of Infectious Disease Dynamics, Imperial College London, added: “What we need is to keep infections really low so people who will get offered a vaccine three to six weeks from now don’t get infected just before they get offered the vaccine.

“From the point of view of the vaccine rollout, it's a small window of time with very little uncertainty we will get to all these people.

“If we allow infection to go to high levels now, everyone who will get infected now just before they get their vaccine is a wasted vaccine – not quite wasted, but we should avoid that as much as we can.”

On February 18, the researchers showed that cases fell across England by two-thirds since January – when the prevelance of Covid was 1.5 per cent.

But this has barely changed since, as new data published today has shown the the rate of decline has slowed. 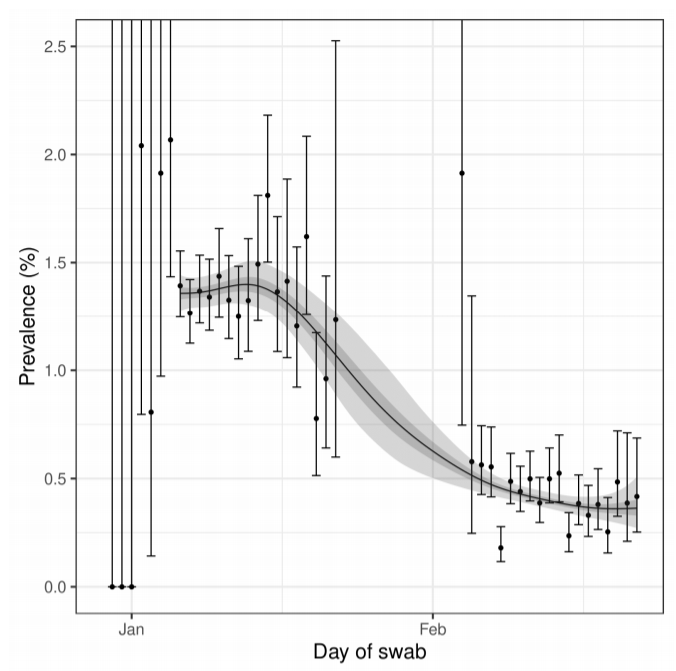 Imperial researchers pleaded with the public to hold our resolve to give the vaccination programme the “best chance of working”.

“I think it's important to keep reiterating that although it's important it’s fallen from those very high levels seen in December, it hasn't fallen that much further [from two weeks ago].

“It’s not really fallen that much at all – still, one in 200 people walking around are testing positive.

“There are lots and lots of us who have not had a vaccine, or been infected before. So if you've not got immunity, there are lots of people walking around [with the virus] and you’re still at risk of catching Covid.

“With the vaccines going so well, we give it the best chance of it working, with the sharpest most sustained decline in infections.”

Rise in the south

In the first week, all regions of England have seen a fall in cases – with London, the South East and West Midlands seeing the biggest dip.

However, the second round of data shows that “there were apparent rises in London, South East, East Midlands and West Midlands”.

Prof Riley said there was a “greater than 80 per cent probability in both London and the South East that there may be some growth”.

There were falls in North East, North West, East of England and South West, and no change in Yorkshire and The Humber.

Prof Riley said: "We don't have, as of yet, a very strong signal of growth in one area. 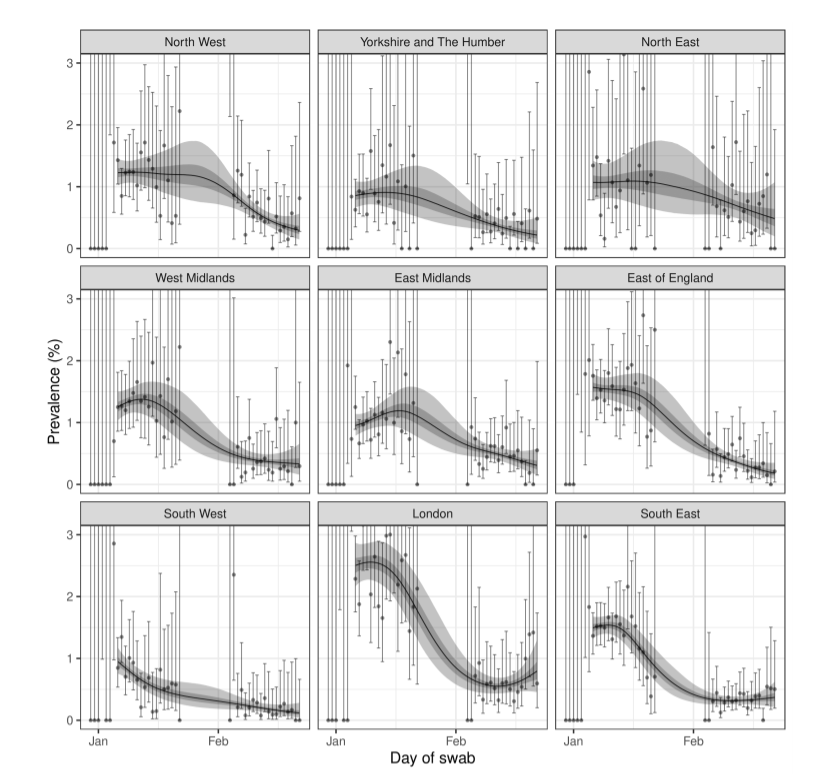 “But certainly there are fairly clear signs there may be growth in some areas.

“In London, the rate of decline certainly appears to have stopped and there is a possible signature there it is going up.”

He warned “people's perception of risk may be changing because of vaccination, even if risk itself isn't changing as quickly as people think”.

The Government coronavirus dashboard does not suggest Covid cases have been rising in London or the South East since mid-February.

Asked why this was, Prof Riley said it took longer for signals of a growing outbreak to appear in official hospital and testing data and therefore REACT-1 was a “little bit ahead of something that might happen”.

He said typically there was a lag of 18 days, suggesting growing numbers of people in London and the South East would be testing positive for the virus in the coming days. 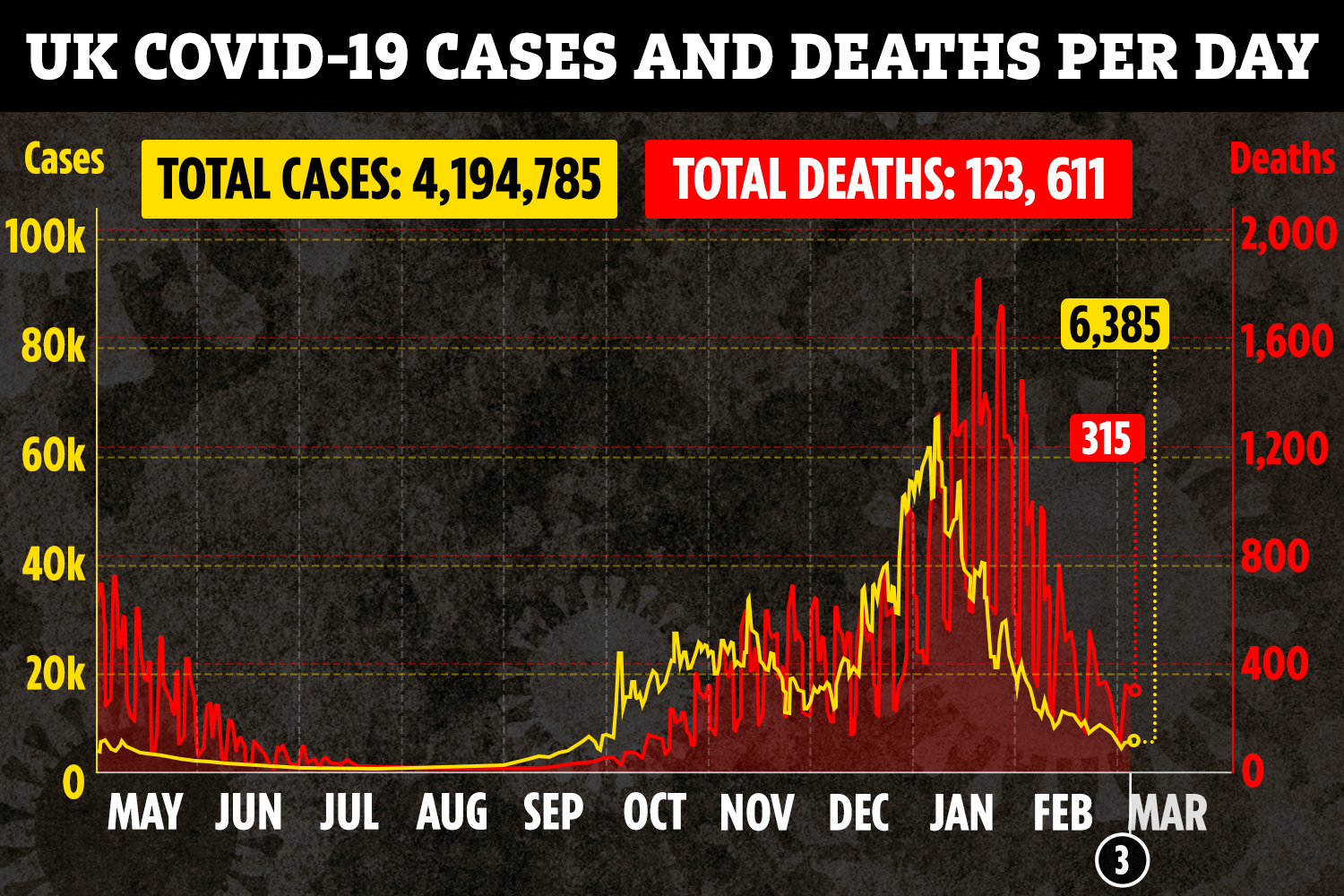 It comes as the NHS in London has been told to prepare for a third wave of the virus later in 2021.

From this month, bosses will need to start planning for the “possible surge” of cases – modelled to peak around July or August.

It will involve giving NHS staff “immediate respite” after the gruelling year they have endured, and a plan to tackle operation backlogs, according to guidance seen by the HSJ.

'Trim your bush!' Fines for bushes that prevent social distancing