The father of the 14-year-old boy who became Europe’s youngest victim of coronavirus has said he has been left ‘devastated’ by the loss of his son.

Portuguese teenager, Vitor Godinho, became the youngest person to die after being infected with Covid-19 in the early hours of Sunday.

He was pronounced dead at Sao Sebastiao Hospital in the town of Santa Maria de Feira, in the northern Portuguese metropolitan area of Porto.

His father, also named Vitor Godinho, has now expressed his grief over his son’s death on social media. 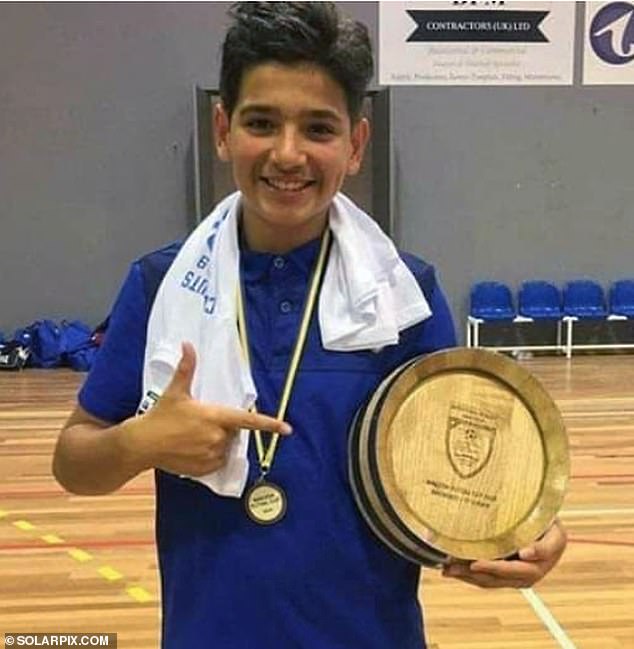 The boy, pictured holding an award, is thought to have suffered from psoriasis, but to have had no underlying health conditions 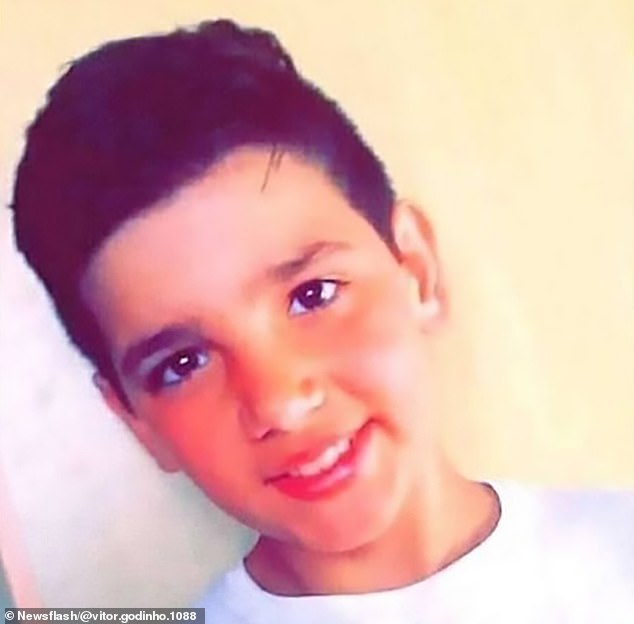 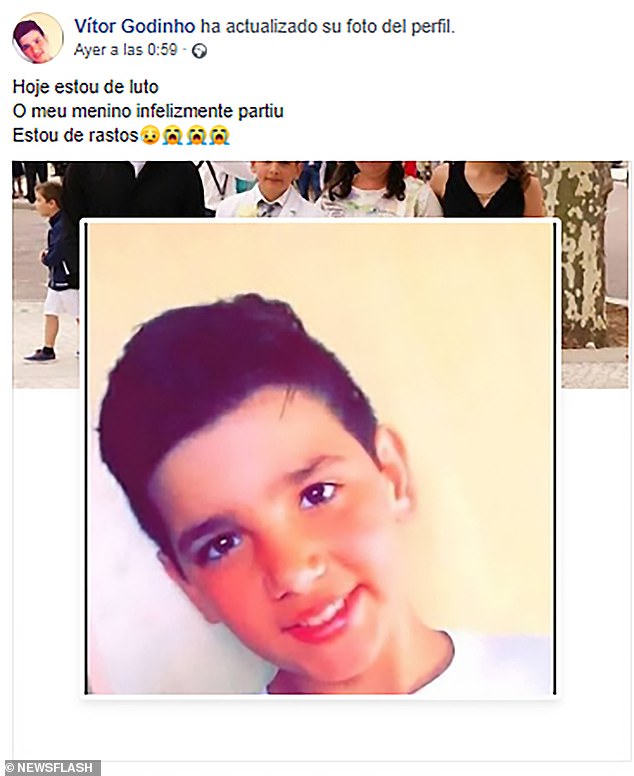 An online tribute to his 14-year-old son, Vitor Godinho senior is said to be devastated by the loss of his little boy to the deadly Covid-19 disease

The grieving father’s friends showed their support for him online, with one writing: ‘Be strong friend, sending a big hug.’

Another wrote: ‘My sincerest sentiments to your family and especially to your Vitor. Stay strong friend. He is going to be watching over all of you.’

While one Marcio Mendes added: ‘I’m in shock Vitor my friend, what a huge loss, stay strong to you and your family. My thoughts are with you.’

Local media reported the 14-year-old victim suffered from psoriasis, but had no major underlying issues with his condition.

At the time of his being admitted to hospital, medics are said to have decided against transferring Vitor to a hospital with a paediatric A&E unit in Porto, Portugal’s second largest city, because of the severity of his condition.

To date, Portugal has recorded 5,962 confirmed cases of the deadly Covid-19 virus, and 140 deaths, according to research from Johns Hopkins University.

The 14-year-old boy, from Ovar, half an hour’s drive south of Porto, died in the early hours of Sunday after being rushed to Sao Sebastiao Hospital in nearby Santa Maria da Feira (pictured) 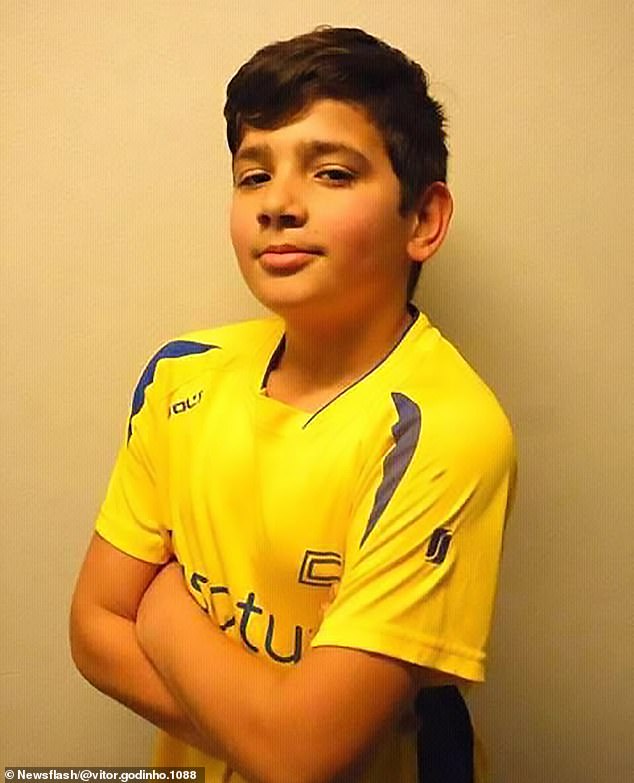 Vitor Godinho, 14, is said to have enjoyed playing futsal. Here he is smiling in a yellow sports jersey with arms folded 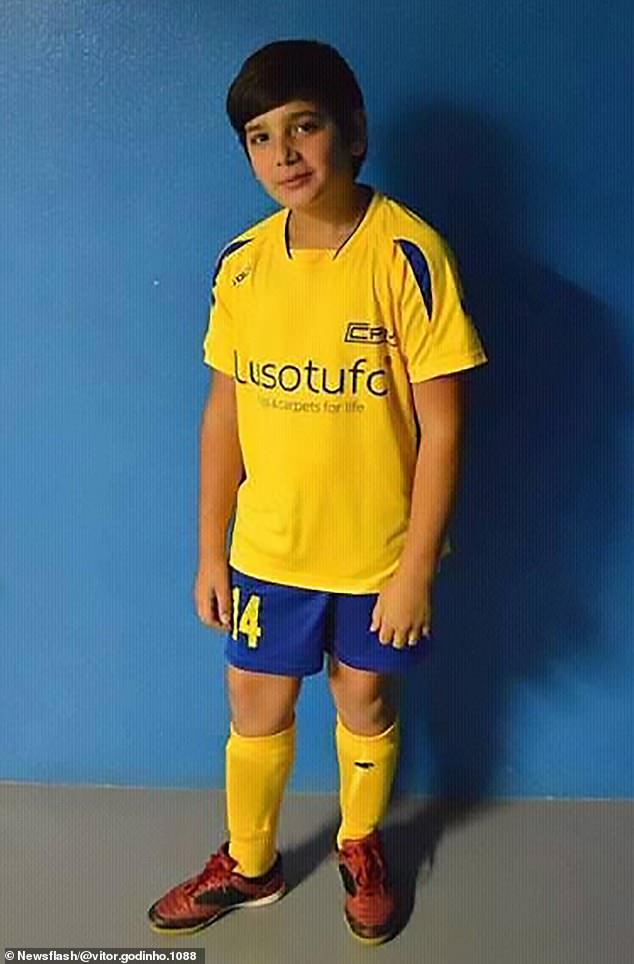 In full kit here, a young Vitor Godinho stands before the camera in yellow jersey and socks, and blue shorts

Before Vitor, 16-year-old French schoolgirl Julie Alliot was reported as the youngest Covid-19 death in Europe.

She died at a hospital in Paris on 25 March.

Ms Alliot had no underlying health conditions and was pronounced dead a week after developing ‘a slight cough’.

Her sister Manon said Julie was a ‘bright and much loved’ person, who ‘loved to dance, sing and make people laugh.’ 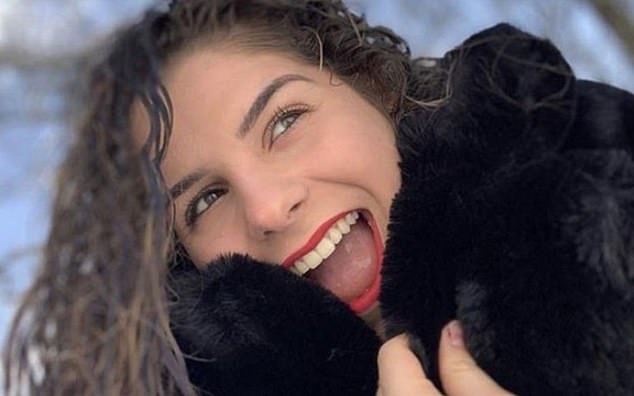 Tributes have been paid to Julie Alliot, 16, (pictured) who succumbed to respiratory problems in a Paris hospital after first developing a ‘slight cough’

Soon after Vitor Godinho died, the president of the Portuguese Football Federation, Fernando Gomes, paid tribute to his memory.

Vitor is known to have played futsal – similar to five-a-side football – for Maceda Cultural and Recreational Centre.

‘With profound consternation I am sending my condolences to the family, friends and colleagues of Vitor Rafael Bastos Godinho,’ said Gomes.

‘At this moment of deep pain for his loved ones, I am also sending words of comfort to the footballing family in the Aveiro region who share with us the disappearance of such a precocious talent.’

The President of the Municipal Council of Ovar, the town where Vitor was from, told local newspaper Correio da Manha: ‘It’s a day which was very much negatively marked by the death of this boy. Unfortunately, it is not the only case.

‘From Saturday until today, we have had three deaths. There has been suffering for our whole town.’

The Director of the Directorate-General of Health, Graca Freitas, said: ‘He did have Covid-19, which does not prevent him from having other equally serious and infectious situations that are being investigated.

‘In addition, he had a basic condition that could lead to some immunosuppression.’

Trump again warns country of a ‘rough’ next two weeks

Could a moderate Democratic senator vote to acquit President Trump?

Carole Baskin's ex-husband was 'strangled and thrown out of airplane'