The father of kidnapping survivor Elizabeth Smart has come out as gay, describing the decision as a “huge relief.”

In a letter shared on his Facebook page Friday, Ed Smart, 64, said he no longer feels comfortable being a member of The Church of Jesus Christ of Latter-day Saints, which opposes gay marriage and same-sex relationships but preaches love and compassion for LGBTQ people.

Smart told Salt Lake City’s KUTV that he “struggled with this for most of his life.” 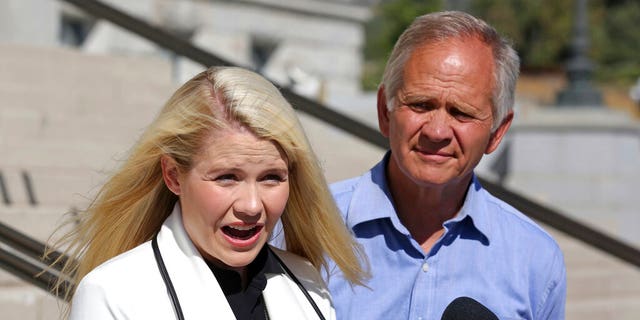 Elizabeth Smart speaks during a news conference while her father Ed Smart looks on, in Salt Lake City.
(AP)

“I have mostly watched in silence for years as many LGBTQ individuals both in and out of The Church [of Jesus Christ of Latter-day Saints] have been victims of ridicule, shunning, rejection and outright humiliation,” Smart wrote.

He added: “I didn’t want to face the feelings I fought so hard to suppress, and didn’t want to reach out and tell those being ostracized that I too am numbered among them. But I cannot do that any longer.”

My parents taught me as a young child that they would love me unconditionally no matter what happened. Their decisions are very personal. As such, I will not pass judgment and rather am focusing on loving and supporting them and the other members of my family."

The Smart family gained national prominence in June 2002 when Ed went before TV cameras to plead for help finding his 14-year-old daughter Elizabeth, who had been kidnapped from the family's Salt Lake City home. Elizabeth Smart was found alive nine months later. Smart and his daughter have since become advocates for other kidnapped children.

Smart said he's sorry for the pain caused to his longtime wife, with whom he has five children. He filed for divorce on July 5, Utah court records show.

"I love my family and always will," Smart wrote. "Lois has been a loyal wife, and extraordinary mother, who has had to endure an impossible part of this journey. I deeply regret the excruciating pain this has caused her."

Elizabeth Smart, now a 31-year-old mother of three, said she's deeply saddened by her parents' separation but that nothing could change her love for them.

"My parents taught me as a young child that they would love me unconditionally no matter what happened," she said, without referencing her father's orientation. "Their decisions are very personal. As such, I will not pass judgment and rather am focusing on loving and supporting them and the other members of my family."

MATT BOMER REVEALS SON, 14, ‘CAME OUT’ AS STRAIGHT TO HIM

Ed Smart first came out to family and friends via Facebook messenger. The Deseret News in Salt Lake City first reported about the post. He said in his statement Friday that he's grateful for the love and support he has received so far.

"It was, as I've said, incredibly hard getting to this point and I feel for so many that are struggling in my situation trying to make the decision of whether to come out or remain closeted the rest of their life," he wrote. "That decision is deeply personal but liberating."

Three Brits among eight missing after huge avalanche in Himalayas