At the start of the week, a city in lockdown was given a clear roadmap to reopening, with benchmarks for success, dates when restrictions would be gradually relaxed and a detailed schedule of improved vaccination and rapid testing, with the aim of living safely with an endemic disease.

That city was not Melbourne. 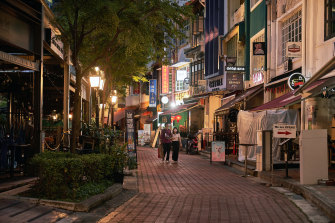 Pedestrians walk along a deserted street in the Boat Quay area of Singapore.Credit:Bloomberg

But halfway through, the reopening date has been confirmed. Prime Minister Lee Hsien Loong laid out exactly what would happen and when – with the caveat that new outbreaks could add delays. He also announced the acceleration of Singapore’s Pfizer program – now to be offered to high school students – and the rollout of rapid testing across industries as a normal part of pandemic life.

Here in Melbourne, where a virus variant has also discovered a slipstream into the community, we have been living in what Health Minister Martin Foley described as a “day-by-day proposition”. 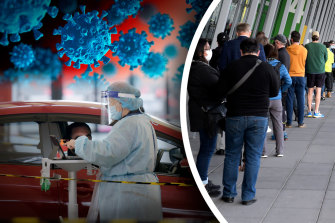 Melbourne residents rush to get vaccinated and tested as lockdown is extended.Credit:The Age

On Thursday, the Deputy Chief Health Officer Allan Cheng said he’d be guessing. “Really I need to look at this every day. It could be shorter. It could be longer. But our best guess at this stage is that seven days will be enough.”

We can also debate about whether reopening will require zero transmission in the community, zero mystery cases or an average infection rate of under five over seven days (Remember that?). We can surmise from rural Victoria’s rules what might be permitted in Melbourne once we reach number x, but we don’t know what that trigger is.

It’s the uncertainty that feeds our anxieties – more than any frustration with our confinement or anger over what caused it. Uncertainty about what will happen when combined with fear of what might happen if COVID lets rip again – it is both exhausting and irritating.

Melburnians have earned the right to be told the bad news straight. They need to know more about the plans to emerge from lockdown 4.0.

We have proved, repeatedly, that we can absorb bad news, buckle down and do what is needed. We are not, on the whole, confused by modifications to mask rules, crowd numbers, density requirements. Now that we’ve had another scare, we are also lining up in record numbers for testing and vaccinations.

But we are on the drip, waiting for daily updates on the numbers and sites while epidemiologists read the tea leaves to discern the future.

It is possible that there wasn’t a detailed plan in place for this lockdown, even though every virologist told us another outbreak was inevitable. This would be even more dismaying than keeping the community response tamped down with daily generalities.

Beyond this lockdown and others to come, as a nation we still don’t know much about plans for our endemic, pandemic future.

We don’t know exactly when all adults in Australia will be able to get vaccinated. The October target was scrapped, replaced by a hope for Christmas.

In the United States, at the end of January, Biden said everyone could be vaccinated by July 4 – and now that vaccines are readily available nationwide, they’re focused on converting the vaccine hesitant. In Britain, a grim study in COVID chaos throughout 2020, they’ll hit that target by the end of July.

We still don’t know the numbers we need to see in each state and territory to reach a vaccination target and more crucially, we don’t know what it would mean about decisions to lock down or open up. The federal Health Minister and Home Affairs secretary have both indicated that herd immunity may well not be enough for us to reopen borders.

So Australians go through our lockdowns operating on muscle memory, told to live in the present and tune in for the updates. Our pandemic planning has an almost amnesiac quality to it. We do what we have to do, restrictions are lifted, we enjoy our freedoms, we eventually start behaving like we’ll never have another outbreak.

If there’s been any pattern repeated throughout this pandemic, it’s that humans are surprisingly terrible at pattern recognition. The same story unfolds in many places, several times over, and yet we are surprised whenever it happens to us.

Overseas, some nations have moved the narrative along. After initial waves of panic, conflict and fatal delays, countries as badly hit as Britain and the United States have been able to plan their way out into a better future.

Australians felt like we were already there, in our COVID-free paradise, but each outbreak is a reminder that without clearly communicated plans, we will keep repeating the same scenes.

Ibiza is shrouded in rain and cloud