Brostrom, who heads the Danish Health Authority, had no qualms telling the media that singles needn’t be celibate – he outlined the risks without discouraging intimacy, which he said was natural. The former gynaecologist’s pragmatism has helped his agency maintain an enviable level of public support even while navigating tough decisions, like breaking with other nations to halt the rollout of the AstraZeneca vaccine in March. 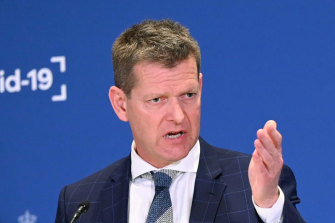 Denmark’s Director of the National Board of Health Soren Brostrom during a press briefing on vaccines.Credit:AP

Denmark is now enjoying the fruits of that trust: the highest vaccination coverage in the European Union after Malta, which is enabling the phase-out of COVID restrictions while maintaining a low disease burden.

Brostrom continues to embrace clear and direct communication as he prepares for a potential surge in cases in the northern winter. To improve vaccination uptake in Copenhagen’s Islamic community, for instance, he took his message to three mosques.

“Immediately after the Friday prayer in the largest mosque in Denmark the imam, the prayer leader, gave me the microphone and I had the opportunity to address the people,” Brostrom said over Zoom. “That never happened in our country before.” 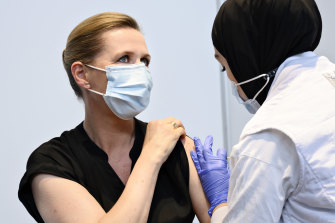 New COVID cases in the nation of 5.8 million people have averaged fewer than 900 a day for the past month, while just over 200 deaths were recorded during the previous six months. Since late April, the country has gradually opened restaurants and sporting arenas. A mask mandate was lifted in June.

As of Friday, Danes no longer have to present their so-called corona passports at public events – the last of its pandemic restrictions.

The approach is a positive sign for many countries ramping up vaccinations in the hope of returning life to normal despite the emergence of the more-contagious Delta variant. The strain is dominant in Denmark as well.

“Denmark is a great role model,” said Catherine Bennett, chair in epidemiology at Melbourne’s Deakin University. “They have brought cases down remarkably consistently even as they have begun stepping out and eased controls.“

The Nordic nation’s pandemic response got off to a “rocky start”, according to Kristian Andersen, a professor of immunology and microbiology at the Scripps Research Institute in California. The Danish expatriate criticised publicly the country’s initial approach that spurned “lockdowns, widespread testing, face masks, and general mitigation efforts” and toyed with a “herd immunity” strategy akin to Sweden’s.

“The right choice,” Andersen said, adding that the country currently ranks among those that test the most. “Now, with widespread vaccination, they’re on a good path, but it’s going to get rocky a couple of months from now.“

Denmark was the first country in the EU to drop use of the AstraZeneca vaccine and later the Johnson & Johnson shot on safety grounds. Brostrom, who serves on the World Health Organisation’s executive board, said his agency opted for “radical transparency” to keep the public informed via websites, memos, publications and press conferences on the controversial decision.

“That enabled us to maintain a very high confidence in our vaccine rollout,” he said.

Brostrom estimates 99 per cent of health workers are fully vaccinated, as are 95 per cent of adults 50 years and older. More than 80 per cent immunity across the Danish population is expected to be attained. “That’s good, but that’s not enough,” he said. 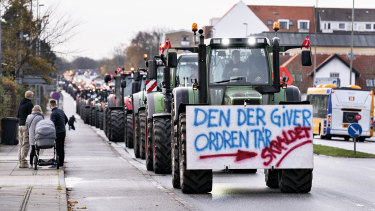 Now organ-transplant recipients, cancer patients on chemotherapy and seniors living in residential homes are being offered a third shot. The government is procuring additional supplies for the wider population though it has yet to decide how and when extra doses will be made available, according to Brostrom.

Brostrom’s pragmatism first made headlines in April 2020, when he was quizzed at a press conference on whether single people could have sex despite the pandemic.

“My reply was, of course they can. We are sexual beings. Sex is healthy. Sex is good,” he recalled. “The Danish Health Authority’s in favour of sex, and that went viral.”

Brostrom, who was an obstetrician and gynaecologist before joining the government 10 years ago, explained that COVID couldn’t be transmitted by semen or vaginal fluid, but that close physical contact brought a risk of inhaling the virus.

He later checked the advice given in other countries, and found that the Danish Health Authority was one of the few that had already considered the issue and made recommendations on its website.

“Virtually none of them had any advice on safe sex in the COVID-19 pandemic, which of course amazes me because sex is a human-health issue,” Brostrom said. “Of course we should advise on how to care for your kids, how to care for sick people, how to have sex.“

Government officials began collaborating with behavioural researchers at the start of the pandemic, using their weekly data to track confidence in health advice, including vaccination, as well as specific concerns across different demographic groups, Brostrom said.

“It enabled us to direct our communication and our initiatives in a very focused way,” he said.

“Usually in public-health communication, you reach mainly educated women and you never reach the young people or the uneducated males, but we managed to do that during the pandemic,” Brostrom said. “I’m extremely proud of that.”