That’s a lot of fish.

A fishmonger in Scotland showed off a massive halibut he recently acquired after it was caught in the nearby ocean. Based on its measurements, the animal was as big as an adult human. 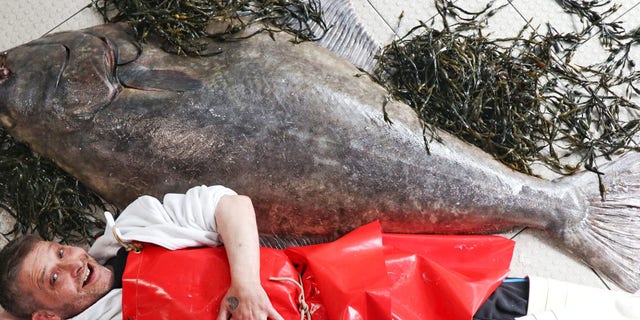 Campbell Mickel says it took four men to carry the fish to his store’s window display, Southwest News Service reports (SWNS). The halibut, which had been caught in the North Sea, reportedly weighed over 160-pounds and measured about 6-feet-long.

“It’s a beast and it wasn’t cheap that’s for sure,” Mickel told the news outlet. “It was wrapped up after I bought it and shipped to me on two pallets.”

Mickel owns a seafood market in Edinburgh, where he reportedly sold filets of the fish to restaurants around the Scottish capital.

“The hardest part was getting it into the shop window on display,” he explained. “It took four men to get it up there, it’s not the easiest job in the world lifting the dead weight of a 77kg (169 lbs.) slimy fish. It dwarfed the other halibut next to it.”

He continued, “We have filleted it now and started delivering it to our restaurant customers around Edinburgh, so it’s fair to say halibut will be on the menu this week. Everyone is used to small halibut, a regular one weighs between 10-14kg (22-30 lbs.), so this is really special.”

According to Mickel, it’s a good sign that a fish this size was caught.

“It’s fantastic news for our seas and oceans to see this size come out,” he said. “I’m delighted to see that fish this size can still exist. It’s good news for the oceans and I’m looking forward to seeing more that have had the time to thrive and grow – as this one has.”

‘We just passed a guy in a jet pack’: FBI investigating after report from commercial plane near LAX