Convoy of care: Fleet of 44-ton trucks delivers two million pieces of PPE to the NHS in Mail Force’s largest delivery yet

Packed with more than two million pieces of vital personal protective equipment, five 44-ton trucks head in convoy for the front line of the battle against coronavirus.

This was the remarkable scene yesterday as Mail Force, the new charity created by this paper, delivered its largest donation yet to the main UK hub of the National Health Service.

In just six weeks, the charity has raised more than £9million, all of which is being spent on sourcing new, quality protective kit for healthcare workers all over Britain. 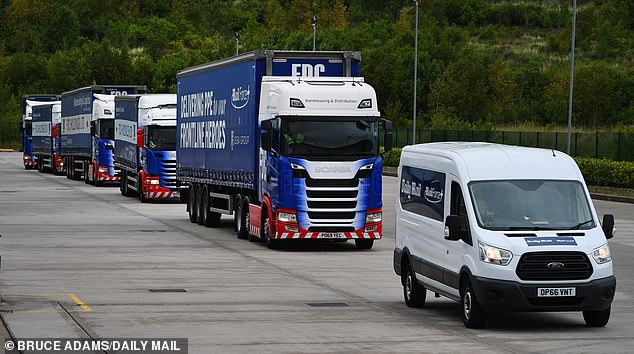 Now, the charity has doubled its weekly cargo of 500,000 hospital aprons – all of them made at a converted cotton mill in Blackburn – to one million.

So, once all two million pieces had been packed up at the Lancashire warehouse of our suppliers, Issa Group, the convoy set off down the M6 for the NHS’s central hub in the south Midlands.

This will now be a regular operation as the charity continues to reinforce national efforts to eliminate the infection wherever possible.

What started six weeks ago, with Mail Force’s first airlift of PPE from Shanghai, has now become a weekly boost to the UK’s armoury of PPE.

Much of this equipment will go directly into the NHS.

It will also go to the adult care sector which is supplied by the Department of Health via council-run ‘local resilience forums’. 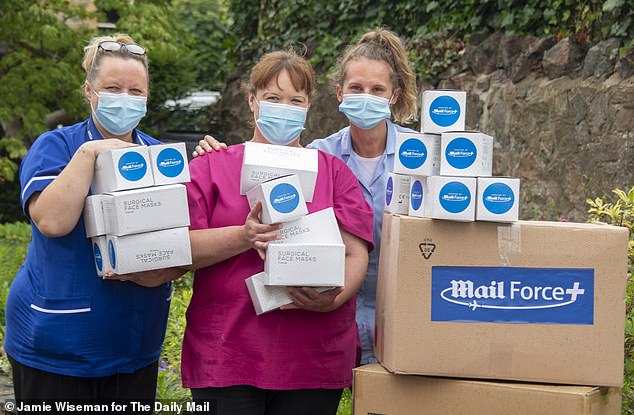 At the same time, Mail Force has been making its own deliveries to individual hospitals and care homes over recent weeks.

In an exclusive interview with the Daily Mail, the former chief executive of the 2012 London Olympics said that the charity’s popularity reflected the national enthusiasm for getting behind a great cause.

‘The thing in this whole exercise which I find most heartening is that if you give the British people – whether it is individuals or healthcare workers, whether it’s companies big or small – the chance to be part of it, they’re brilliant,’ he said.

‘The biggest lesson I learned from the Olympics is if you let the Brits join in, they are the best people in the world.

‘If you try and kind of keep people out of stuff, we don’t like that. We feel a bit resentful. So thank you, Mail Force.’

Many Mail readers donating to the charity have written poignant letters about the need to support front-line workers.

Marie Butcher, from Suffolk, donated in memory of her GP, Dr Fayez Ayache, who was one of the first health workers to die of Covid-19.

Dr Ayache, who had worked for the NHS for more than 40 years, was admitted to Ipswich Hospital on April 2, and died six days later.

HERE’S HOW TO DONATE

Mail Force Charity has been launched with one aim to help support NHS staff, volunteers and care workers fight back against Covid-1 in the UK.

Mail Force is a separate charity established and supported by the Daily Mail and General Trust.

The money raised will fund essential equipment required by the NHS and care workers.

This equipment is vital in protecting the heroic staff whilst they perform their fantastic work in helping the UK overcome this pandemic.

If we raise more money than is needed for vital Covid-1 equipment, we will apply all funds to support the work of the NHS in other ways.

Mrs Butcher wrote: ‘He was a great doctor and the most kind and thoughtful man. Like many others, I was extremely sad at his loss.

‘Thank you for all you have done and are doing to support all the front-line workers in health and social care by providing PPE.’

Mail Force supporter Jane Wilkinson, of Kirkheaton, West Yorkshire, added: ‘As a retired district nursing sister, I find it very difficult to accept that staff from all disciplines have not been provided with adequate PPE.’

Another retired NHS worker donating to the charity, Elizabeth McAlister, of Belfast, said: ‘As a practising nurse for over 40 years, I am so proud to have been a member of this profession.

‘I worked in an acute unit during the years of what became known as The Troubles.

‘It is heart-warming now to know that the service and sacrifice so freely given by nurses is now being recognised.’

Staff at Wishmoor Care Home in Malvern, Worcestershire, came out this week to welcome a delivery of Mail Force gowns, coveralls, face masks and hospital aprons.

The charity had been contacted by Angela Pulford, in memory of her uncle, Tom Jones, who was a resident there before he caught Covid-19 in hospital in Redditch, after suffering a fall and fracturing his hip.

He died on April 4, just two days after he was diagnosed.

Mrs Pulford spoke of her uncle’s 98th birthday party at Wishmoor on March 18, when he was pictured blowing out his candles on his cake.

She said staff at the home treated the war veteran like family. He even had a greenhouse there where he grew his own tomatoes.

Mr Jones had served with the Royal Engineers in Burma during World War Two.

‘He used to tell his family tales of leeches, snakes and transporting ammunition by mule,’ said Mrs Pulford.

After the war he worked as a carpenter and was married for 66 years to Joyce, with whom he had a son, Roy, who died from leukaemia in 2017.

Mel Lengthorn, senior care assistant, said that the Mail Force PPE will help staff ‘enormously’, adding: ‘We use the PPE every day and in all sorts of settings.’

As Angela Pulford reflected: ‘If Mail Force’s brilliant campaign saves other families from losing loved ones, it is well worth supporting. I am sure you have made a huge difference.’

Country estate with its own farm goes on the market for £2.25m