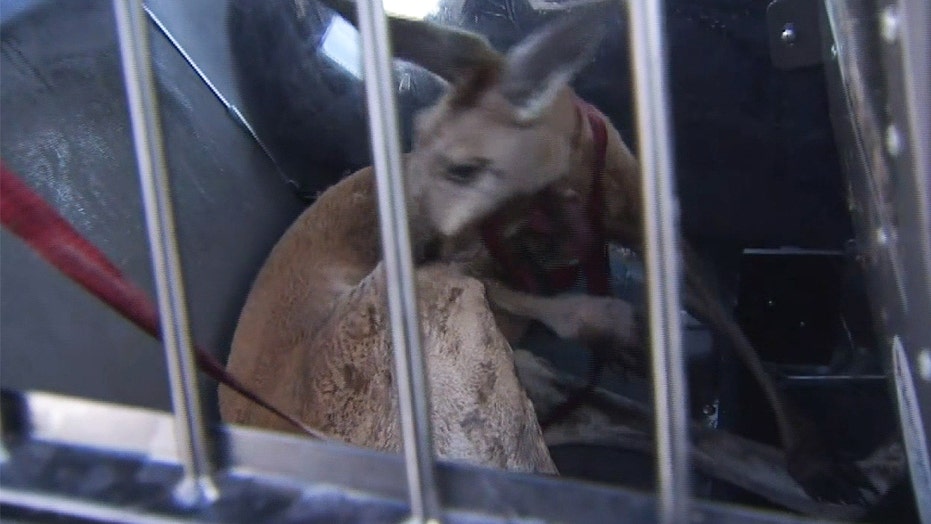 Floridians are used to seeing alligators roaming the streets of the Sunshine State, so it was a shock to police officers in Fort Lauderdale when they came across a kangaroo hopping around.

Police responded to a call of a kangaroo in the area of North Andrews Avenue around 9:15 a.m. Thursday.

“At first we didn’t really believe it ’cause there was only one call, so when we got there, there, sure enough, was a kangaroo,” Fort Lauderdale police officer Robert Norvis told reporters, according to WSVN.

Officers were able to wrangle the marsupial by using a dog leash around its neck before guiding it into the back of a patrol cruiser.

“We just tried to corral it and keep it out of traffic,” Norvis said. “We tried to make a plan and then we were able to come together and get him kind of surrounded. Once we had him [we] kind of closed in — he’s very friendly — we were able to get a rope around his neck and get him into the back of the car.”

He continued: “He didn’t resist. I actually was expecting to get kicked but he was very friendly and didn’t do anything.”

Kangaroos are indigenous to Australia and officials believe the animal was a resident’s pet that might have escaped.

The misplaced marsupial is now in the custody of the Florida Fish and Wildlife Conservation Commission, who are investigating. It is being kept at the police department’s barn during the investigation.

“Fort Lauderdale code does not allow exotic animals like this within the city limits,” the police department said in a tweet.