Victoria’s health minister has blamed federal government neglect for mounting pressure on the state’s hospitals and their workforce, warning the strain on the healthcare system is “simply untenable” without Commonwealth investment.

Martin Foley said the situation was only expected to worsen in winter as cases of coronavirus and influenza rise, as medical colleges and unions repeatedly sound the alarm on staff burnout and warn Victoria is on the edge of a mass departure of pandemic healthcare workers.

“What we need is hard commitments to deal with the mounting funding challenges,” he said, accusing the Commonwealth of “deliberately and willfully” ignoring the pandemic’s ongoing pressure on health services.

“The total silence from the Commonwealth government around health funding in this election campaign has been beyond disappointing.”

While Foley acknowledged that the state’s healthcare workers had been under “extraordinary pressure” for more than two years, he made no new announcements for incentives or on the ground support for existing hospital staff.

His swipe at the federal government comes a day after a respected senior doctor at Melbourne’s major trauma centre announced he was resigning citing untenable and deteriorating conditions in Victoria’s healthcare system, which he warns are putting lives at risk and pushing healthcare workers to breaking point. 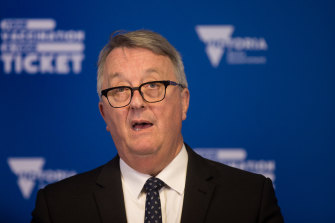 Professor John Wilson, the outgoing president of the Royal Australasian College of Physicians, left The Alfred hospital on Wednesday after 30 years of service, and said he was compelled to make a stand “because I cannot keep working in a system where we are not able to deliver top-quality care with limited resources when staff are being burnt out to the point of beyond exhaustion”

“We’ve got absolutely unacceptable ambulance ramping, staff that are burnt out and unable to service the needs of the community,” he said

“We’re talking about hospitals that have no beds to put people in who’ve got acute injuries and acute illnesses. We have a terrible and dire situation that is unprecedented.”

Wilson, who called for an urgent health summit to resolve the issue, said Victoria was dangerously close to a “Mid-Staffordshire inquiry situation”, referencing a notorious crisis at a hospital in the British Midlands where hundreds of patients died over more than two years due to declining conditions. He said staff were leaving hospitals in droves and he feared for patient safety.

“Right now, we’re just shuffling the deckchairs on the Titanic,” he said.

Asked if he had spoken to Wilson, Foley said he had not, but publicly thanked him for his “extraordinary service” in a press conference on Thursday morning.

Foley also refused to be drawn in on whether he had read a report into the state’s crisis-addled triple-O service, six weeks after it was handed down and said it was in the hands of Victorian emergency services minister Jaclyn Symes.

The report by former police chief Graham Ashton, handed to the government in March, was triggered by a spate of deaths linked to triple-0 delays.

“That report has been provided to the Minister for Emergency Services and I’ve certainly been involved in advocating health’s case as part of that,” Foley said.

Victoria is competing in a global race to lure experienced doctors and nurses, in a bid to ease severe staffing shortages that were crippling hospitals and prepare for potential COVID-19 waves in the future.

When asked what the government was doing to support staff, Foley referred to a $12 billion budget investment, including a plan to train or hire up to 7000 new health care workers, mostly nurses to help repair the state’s stretched health and emergency services system.

But Foley warned it could take up to 18 months for some international healthcare workers to be on the ground in hospitals due to lengthy delays in getting clearance from immigration authorities and the Australian Health Practitioner Regulation Agency.

Describing the situation at Victorian hospitals as “simply untenable” Foley said part of the reason why health services were under so much pressure was due to people not being able to get in to see general practitioners in a timely manner.

“We know whoever is the next federal health minister will have no choice but to sit down with the states and come to an arrangement that sustains primary care.”

He said this was fuelling a surge in people flooding to hospital emergency departments for treatment and a rise in people calling ambulances for non-emergencies after delaying treatment.

I had two kids by 14 and became a prostitute who slept with 1,800 men a year to help feed them – I cried every time