Washington: A retired FBI agent who went missing in Iran 13 years ago, has died in Iranian custody, his family said.

"Today with aching hearts, we are sharing devastating news about Robert Levinson, the head of our family," Levinson’s family said in a statement on Facebook and on a website.

"We recently received information from US officials that has led both them and us to conclude that our wonderful husband and father died while in Iranian Custody. We don’t know when or how he died, only that it was prior to the COVID 19 pandemic,” the family said. 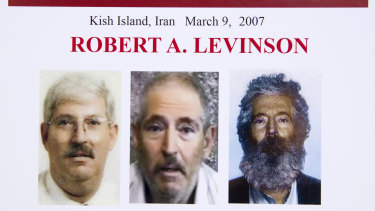 An FBI poster showing how former agent Robert Levinson would look like after five years in captivity. A federal US judge held Iran responsible for the kidnapping in 2012.Credit:AP

Levinson disappeared under murky circumstances in March 2007 while on Kish Island, a tourist spot off the coast of Iran, during an unauthorised trip for the CIA to gather intelligence on Iran's nuclear program.

The family said they did not know when, or even if, Levinson's body would be returned to them, calling it "the very definition of cruelty".

"How those responsible in Iran could do this to a human being, while repeatedly lying to the world all this time, is incomprehensible to us," the family added. "They kidnapped a foreign citizen and denied him any basic human rights, and his blood is on their hands."

US President Donald Trump said on Wednesday, US time, he had not been told that Levinson was dead, but things did not look good and a lot of people thought Levinson had died.

Trump called Levinson "a gentleman" and "outstanding." He added, in apparent reference to what US officials had told the family: "They've been making the statement to the family, I believe."

"It's not looking good; he wasn't well for years anyway, in Iran," Trump said.

"It's not looking great, but I won't accept that he’s dead," the President added. "They haven't told us that he's dead, but a lot of people are thinking that that’s the case."

Levinson disappeared after flying from Dubai to Kish Island where he met with Daoud Salahuddin, an American Islamic militant who fled to Iran while facing charges related to the murder of an Iranian embassy official based in Washington. 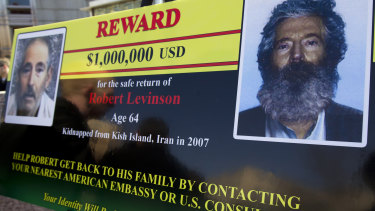 An FBI poster of the reward offered for information on former FBI agent Robert Levinson.Credit:AP

Levinson, working then as a private investigator, was seeking information on alleged corruption involving the former Iranian president, Akbar Hashemi Rafsanjani, and his family, said sources familiar with his work.

Months after he disappeared, US government sources acknowledged that before travelling to Kish Island, Levinson had maintained an unorthodox contractual relationship with the analytical branch of the Central Intelligence Agency. A handful of CIA officials were forced out of the agency and several more were disciplined after an internal agency investigation.

Levinson was last viewed alive in a 2010 hostage video in which he wore a prison-style orange jumpsuit and pleaded for help. In early 2011, the family received photos of him holding up handwritten placards with messages in stilted English, such as "Why You Can Not Help Me".

Family members continued to believe he was alive, and American officials repeatedly sought to secure his release, or to learn what happened to him. The Obama administration brought up Levinson consistently in direct meetings with Iran while negotiating the 2015 nuclear deal that Trump pulled out of eventually. Officials in the Trump administration mentioned Levinson in every public statement urging Iran to release Americans imprisoned in the country. The State Department and Justice Department had offered a combined reward of $US25 million ($42 million) for information on him.

The Iranian government has never publicly acknowledged any role in Levinson's abduction, though at the time of his disappearance a government-affiliated media outlet broadcast a story saying he was "in the hands of Iranian security forces".

On Wednesday, Iran said again it had nothing to do with Levinson's disappearance or detention.

Some US investigators at least until recently believed Levinson was still alive, while officials at other US agencies believe he died some time, perhaps years, ago.