FRANCE will lift the lorry travel ban "within hours" after supermarkets warned of food shortages over the mutant Covid strain blockade brought in last night.

It comes as Boris Johnson was set to meet his Cobra team this morning to address the 48-hour ban ordered by President Emmanuel Macron. 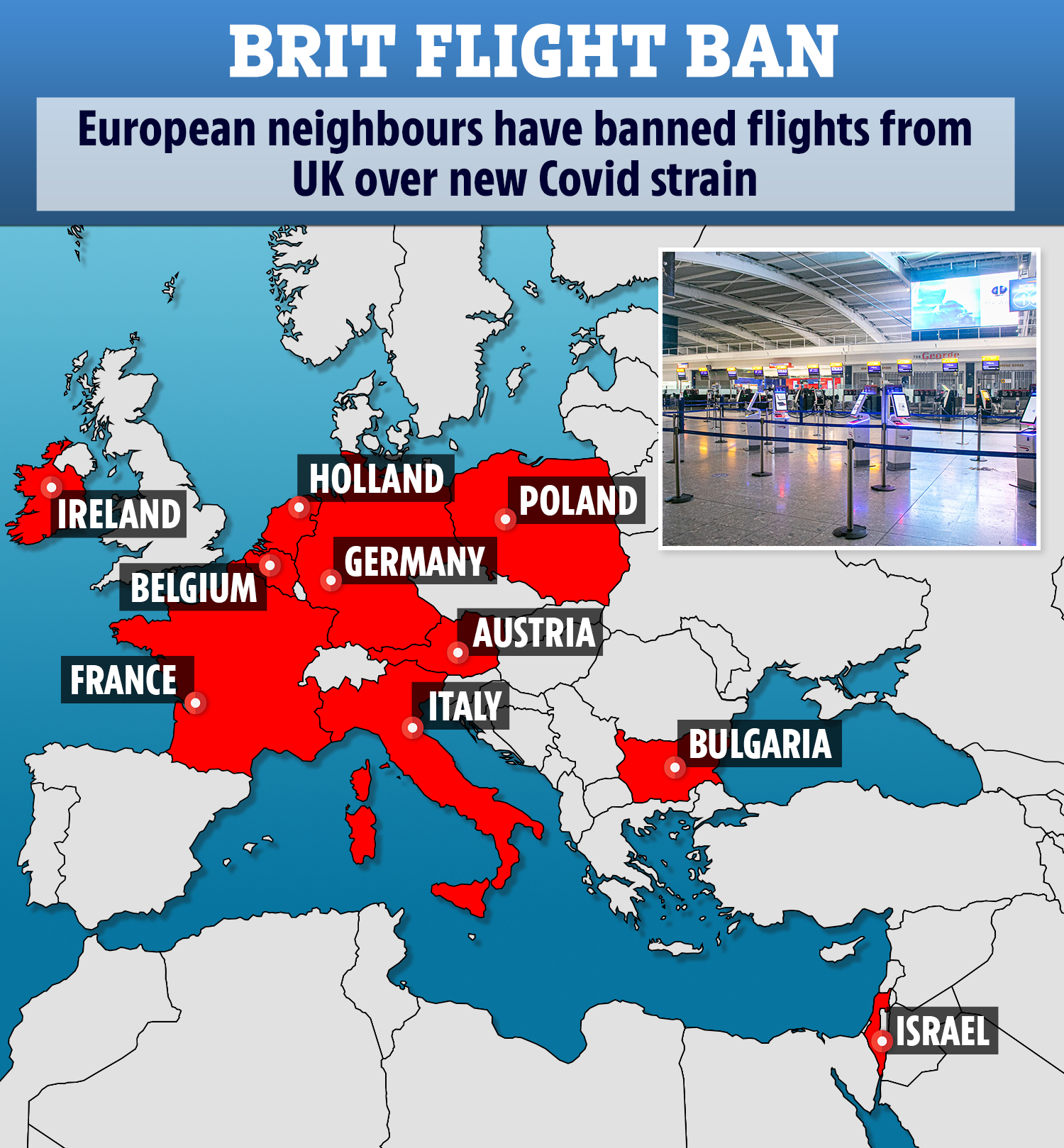 But the French said "in the next few hours" protocol will be established "to ensure movement from the UK can resume".

Transport Minister Jean-Baptiste Djebbari said: "In the coming hours, at European level, we will be putting in place a solid health protocol so that flows from the United Kingdom can resume.

"Our priority: protect our nationals and fellow citizens.”

Supermarkets feared major shortages of food and Christmas goods after France closed its UK border – with chaos set to continue today even if its lifted.

Sainsbury's has warned that some products could be missing from shelves due to restrictions at ports, but said food for a traditional Christmas lunch is available and already in the country.

A spokesperson said: "All products for the Great British Christmas lunch are already in the country and we have plenty of these.

"If nothing changes, we will start to see gaps over the coming days on lettuce, some salad leaves, cauliflowers, broccoli and citrus fruit – all of which are imported from the Continent at this time of year."

The news sparked panic buying this morning, with shoppers lining up outside supermarkets at 5am to stock up on Christmas supplies.

Despite the rain, queues were seen outside one Waitrose store in Henleaze, near Bristol, in the early hours of today.

And another Brit shared a snap of him waiting with other shoppers at 5.50am to get toilet paper.

Supermarkets have urged people not to panic buy and Tesco insisted its stocks would not be affected by the 48-hour blockade.

There was chaos at Britain's busiest port in Dover overnight as people were left stranded in the cold after the sudden closure.

The port has now been closed, sparking fears for deliveries to and from Calais in the lead up to Christmas.

But supplies of the Covid vaccine will not be affected, Transport Secretary Grant Shapps said on Monday morning.

An industry source said: “Just when you thought it couldn’t get any worse — disaster on top of disaster. I fear for supermarket supply chains.

"It’s the panic buying we are most worried about. The chains have held up all year but only if people are sensible.”

Lorry drivers were arriving in Dover throughout the night and into the morning, only to be turned away by cops and port authorities, with huge queues of goods vehicles at the border this morning.

Queues stretched seven miles at ports in both Britain and France as the ban added to existing worries over Christmas stockpiling and Brexit uncertainty.

Patrols have been seen on the Scotland and Wales borders – to ensure people don't travel.

It is feared the EU could ban all flights into the UK from tonight over the new strain which is causing havoc in the country. 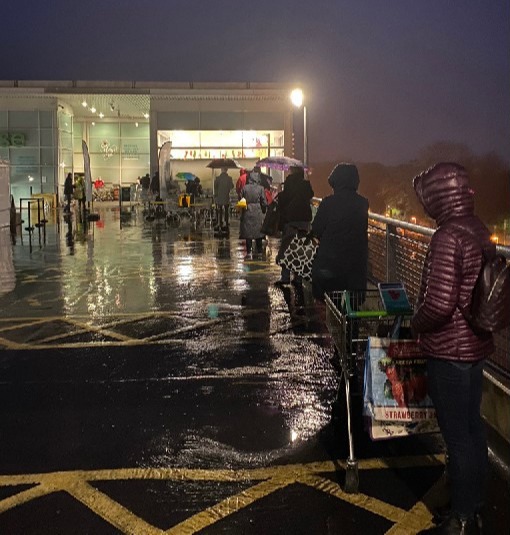 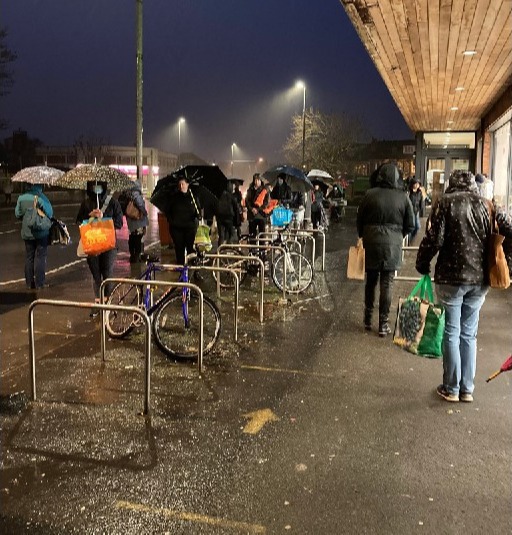 The new mutant strain causing the sudden ban is feared to be 70 per cent more infectious.

However My Shapps said the new strain is not unique to the UK, adding: "We detected that first but we know already that the cases have been found in continental Europe and other countries, including countries which have placed travel bans – the Netherlands, for example – actually have much higher case rates per 100,000 than the UK at the moment.

"So I think it stands to reason that, once people look at this, they'll probably realise that it's actually already in their domestic coronavirus case load."

Fears the blockade could disrupt vital supplies of the Pfizer Biotech vaccine to the UK – which is made in Belgium – were eased this morning as Mr Shapps said supply would not be hit.

Mr Shapps told Sky News: "There's no issue (with the vaccine) at all. Most of the vaccine does not come on a.. roll in, roll off… in other words it's not accompanied by a driver it comes on containers.

"There are good supplies in the meantime so there won't be an impact on the vaccination programme.

"But it's obviously important we get this resolved with the French and that's what we'll be trying to do today."

Military aircraft could airlift supplies of the vaccine from Belgium if the freight ban stays in place for longer than 48 hours, The Department of Health confirmed.

PM Boris Johnson has called an emergency Cobra meeting of ministers and the military this morning.

Last night, a government spokesman said it was expecting "significant disruption in Kent" after the French ban kicked in from 11pm.

A government spokesman said: “As a result we are urging everybody – including all hauliers – to avoid travelling to Kent ports until further notice.

“We are working closely with Kent Resilience Forum, Kent Council and Highways England to ensure contingency measures are urgently put in place to manage disruption, and the Prime Minister will chair a COBR meeting tomorrow to discuss the situation.”

Shortly afterwards, Operation Stack, the emergency measure to avoid gridlock in Kent, kicked in along the coastbound M20, with the road between junctions 8 and 11 closed to traffic. 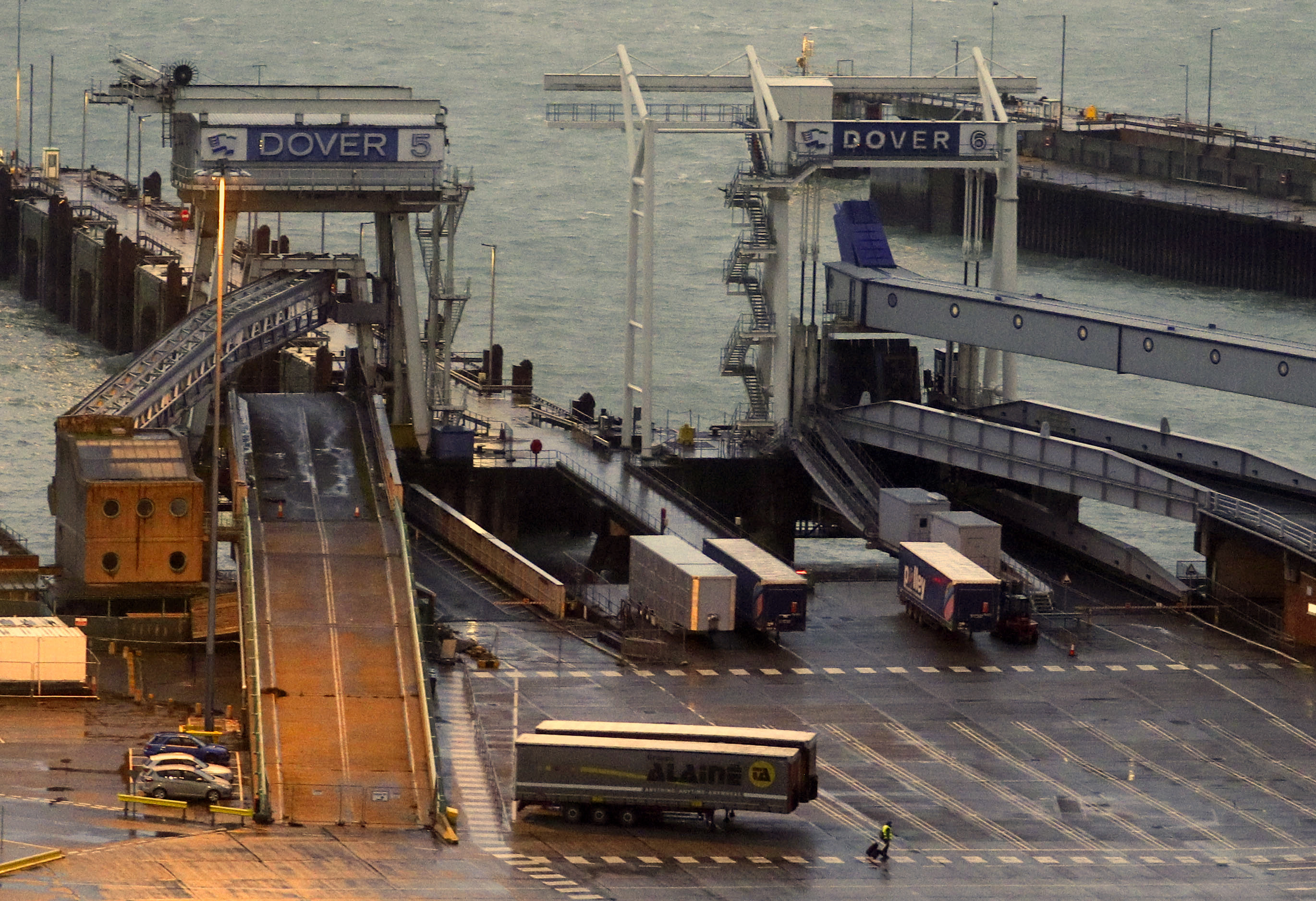 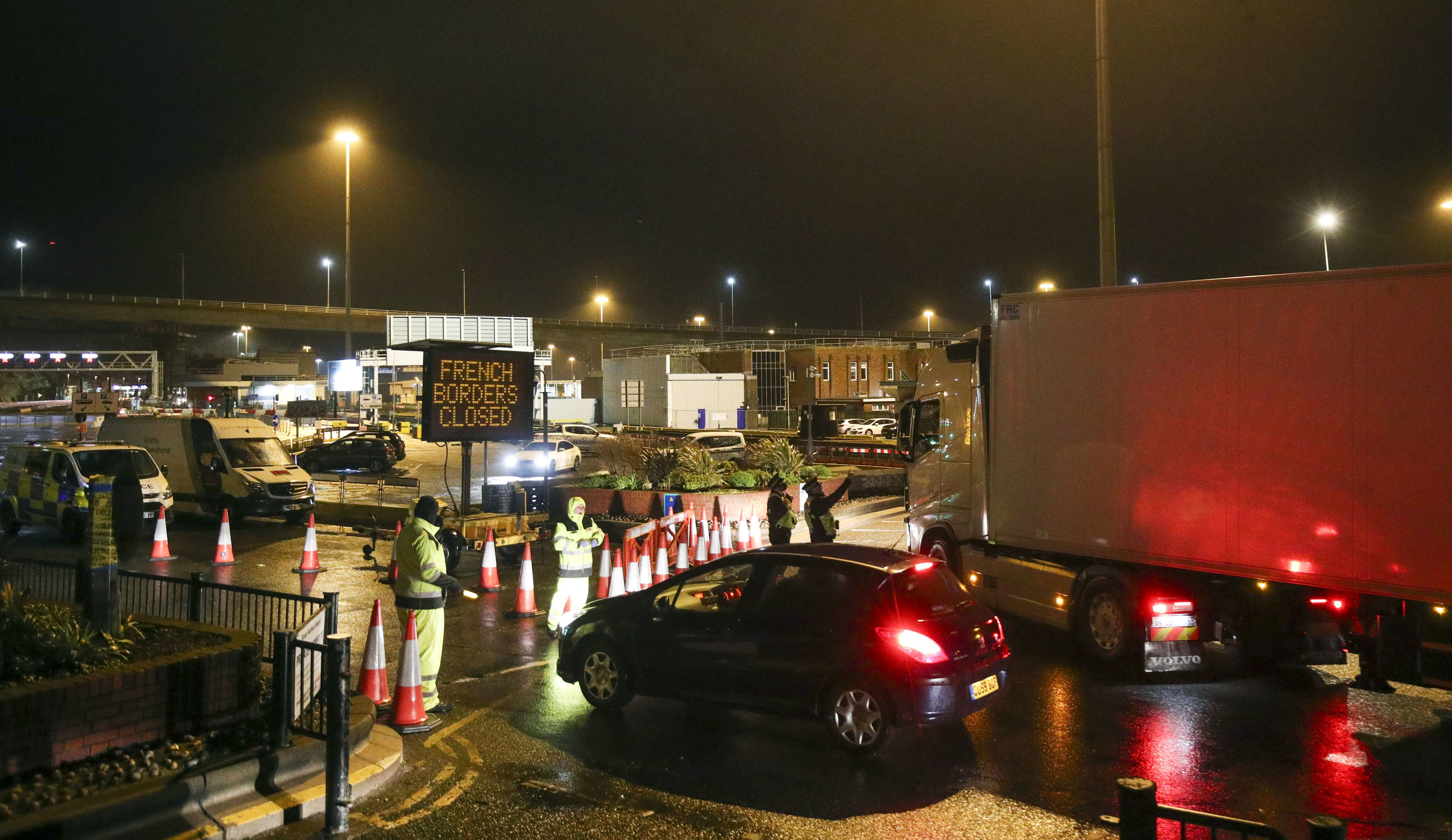 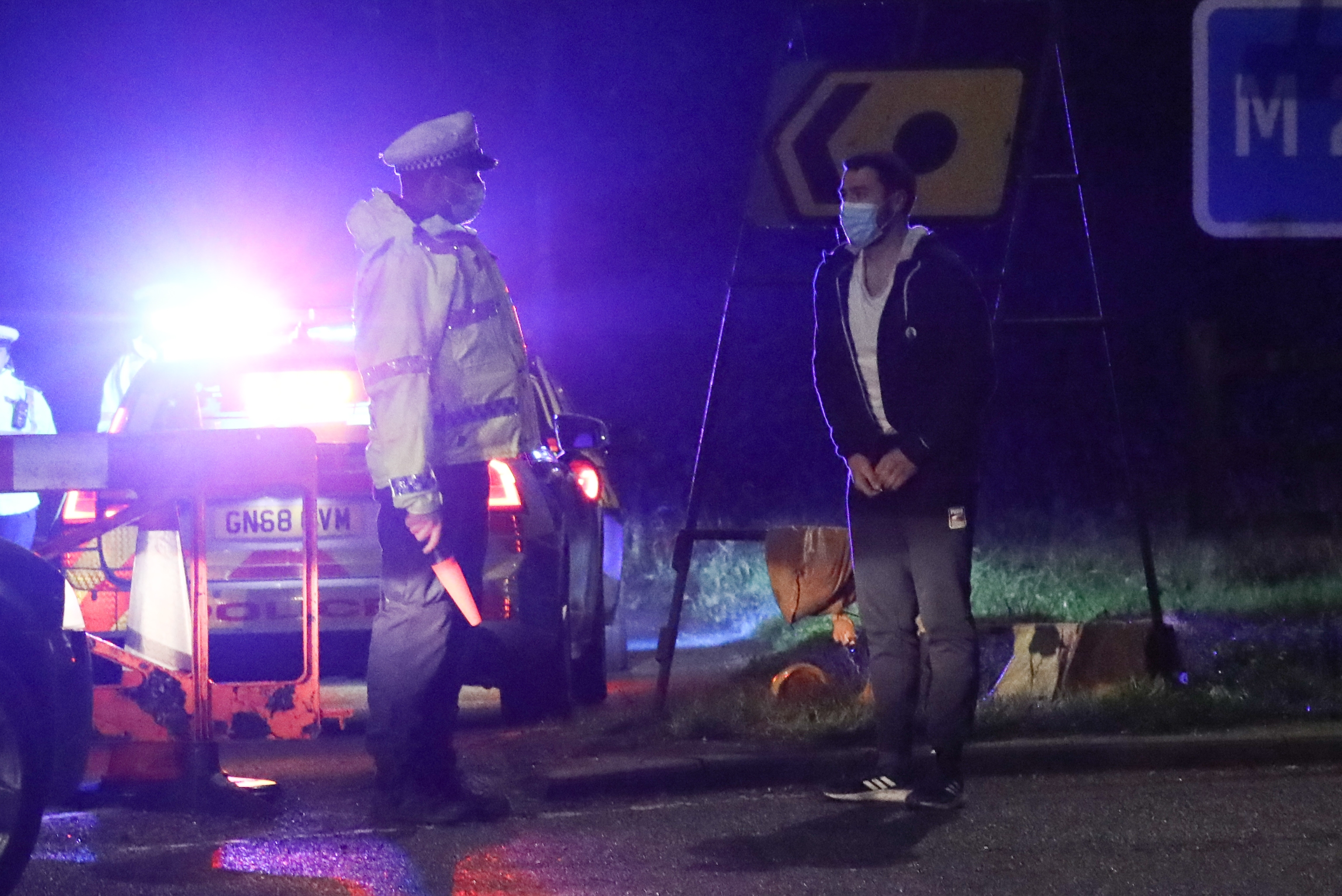 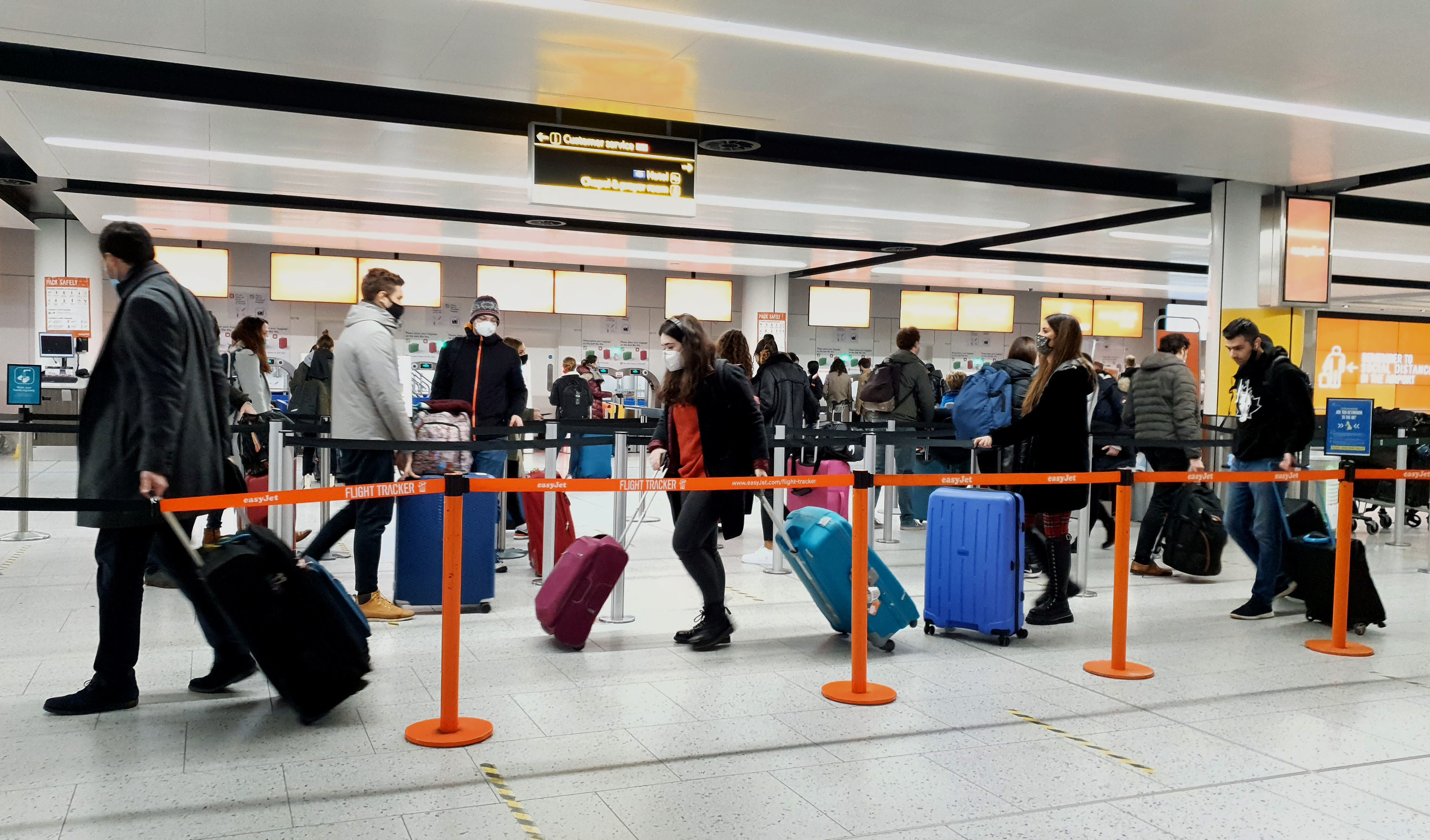 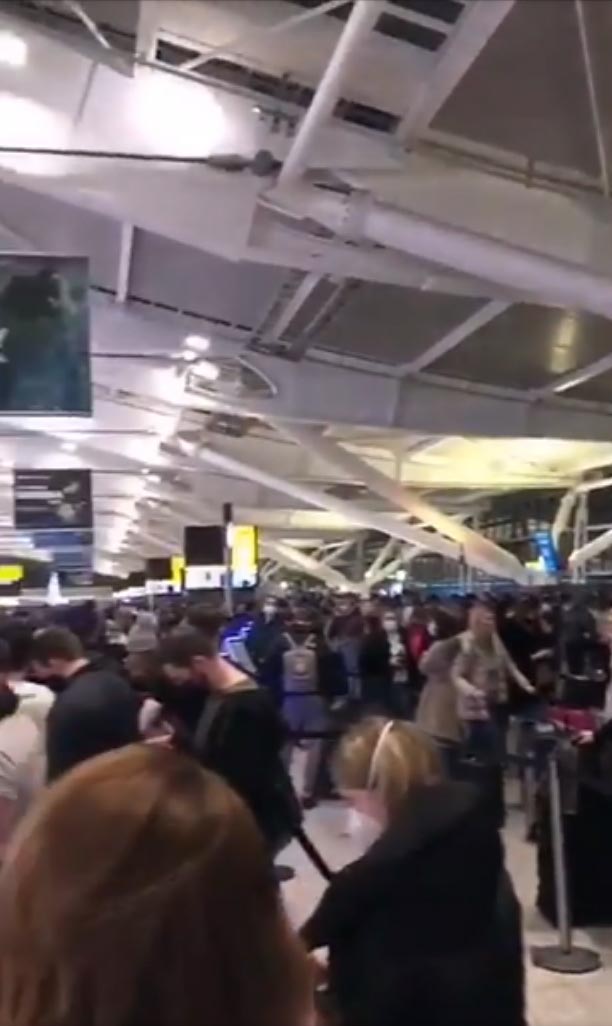 Ministers have been preparing for months for border chaos from a possible No Deal Brexit and will bring forward contingency plans.

EU states will discuss their response to the new virus strain in a call this morning. It has now reportedly been found in Italy.

Germany, Holland, Belgium, Austria and Bulgaria were also halting flights. Trains to Belgium were suspended and Ireland introduced a 48-hour ban on travellers from midnight.

Ian Wright, of the Food and Drink Federation, said the suspension of  freight traffic could cause “serious disruption”.

He added: “Continental truckers will not want to travel here if they fear  getting marooned.

“The Government must very urgently persuade the French government to exempt accompanied freight from its ban.”

Rod McKenzie, of the Road Haulage Association, branded it a “hammer blow”.

France-based Brit Phil Williams tweeted: “Pity the poor sods stuck in trucks on the M20. What did they do wrong?

"And all that stuff stuck in Calais. A few empty shelves in Waitrose methinks.”

One trucker wrote: “I’ve got two trucks in Dover, one was put on the boat to Calais, the other has been told to go home. Some excellent consistency there.”

The moves came as Brits raced into a Christmas exodus to try to save their festivities.

In London, St Pancras Station was rammed with people desperate to visit family.

Amid scenes later slammed by Health Secretary Matt Hancock, commuter Harriet Clugston, who filmed the crowds, compared the scenes to the fall of Saigon in the Vietnam War. 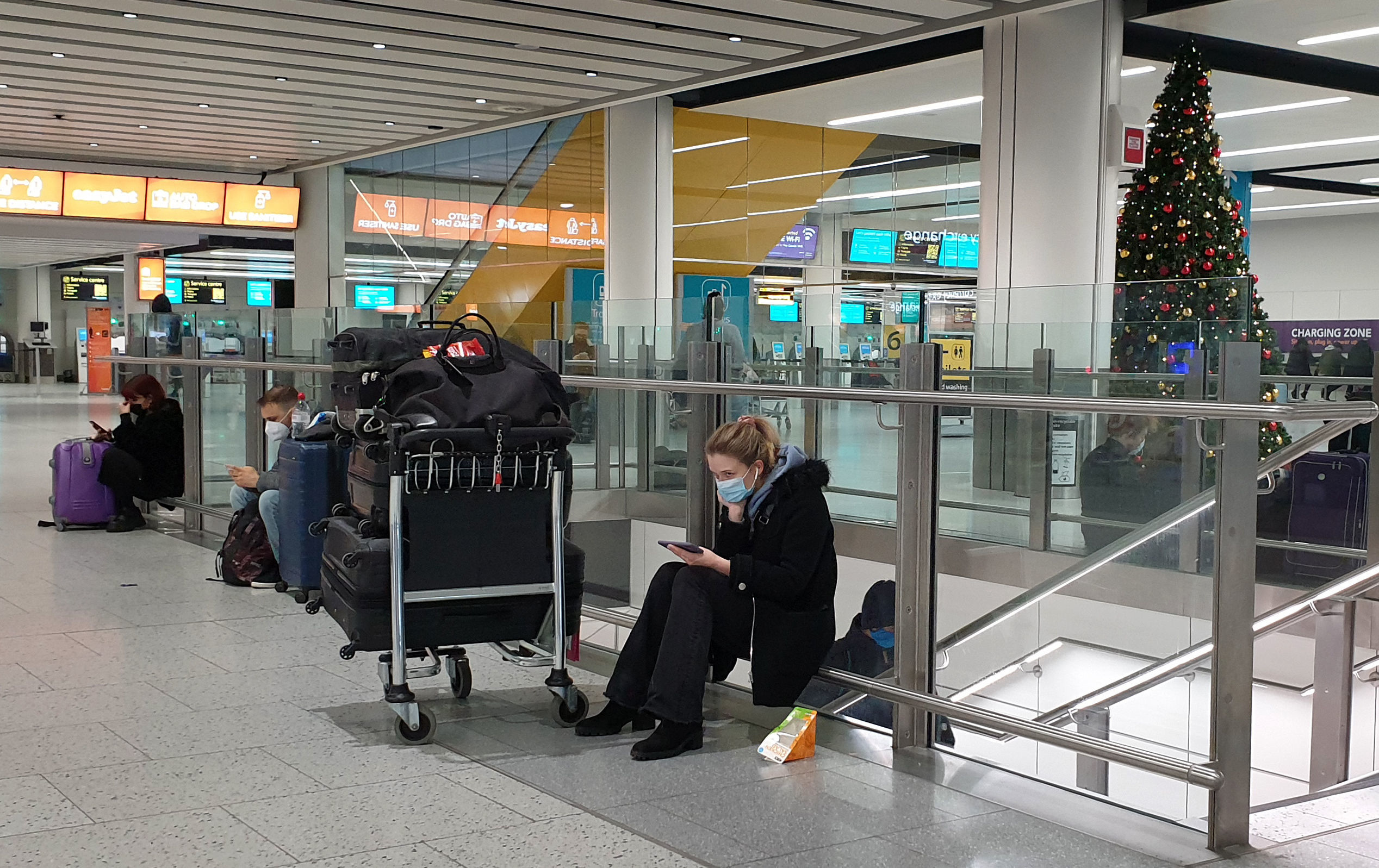 She tweeted: “Last train out of Saigon. Queue at St Pancras as we wait to board the Leeds-bound train. As expected, train is crammed.”

Eurostar rail tickets sell out in less than an hour amid rumours of the French ban.

The shock Tier 4 rules imposed on London and parts of the South East mean people are only supposed to leave their areas for limited reasons — such as for work, education or caring responsibilities.

Within an hour of Boris Johnson’s bombshell announcement on Saturday evening, Londoners jumped into cars, taxis and even rental vehicles to escape the city.

Roads such as the A40 clogged up and airports like Heathrow were packed.

The National Police Chiefs’ Council told The Sun “blatant” rule-breakers would receive fixed-penalty notices. Leader Martin Hewitt said: “These restrictions will be upsetting for many after a very challenging year.

“But most people will want to do what they can to protect public health and the health of their loved ones. We urge everyone to follow the rules in their area.

“We are confident that the majority of people will continue to do their best to adapt and do the right thing.

“Those who blatantly ignore the regulations should expect to receive a fixed penalty notice.

Just when you thought it couldn’t get any worse — disaster on top of disaster. I fear for supermarket supply chains

"Clear guidance will be developed for officers who are policing these regulations, and they will continue to play their part in helping the public navigate and understand changes in their area.”

British Transport Police revealed they were boosting officer numbers across the southern transport network to ensure people were making only essential journeys.

The Met Police warned the “most dangerous and flagrant breaches” of Tier 4 regulations would be hit with penalties, tweeting: “Don’t risk a fine in the lead up to Christmas.”

In Scotland, cops said they would double their presence along the border after First Minister Nicola Sturgeon announced a clampdown.

Police Scotland Chief Constable Iain Livingstone said “highly visible patrols” on roads would be used to “deter anyone who might be considering breaching the coronavirus travel restrictions”.

Meanwhile Mr  Hancock told Brits thinking up their own escaped plans to “unpack their bags” and “restrict social contact”.

Hinting that tough restrictions on movement would be in place for months to come, he warned that “of course” police would enforce the law and prevent people leaving Tier 4 areas.

Speaking to Sophy Ridge on Sky, he said of reports of the exodus: “This was clearly totally irresponsible behaviour. The Chief Medical Officer Chris Whitty was absolutely clear that people should unpack their bags if they have them packed.

“I think that it’s relatively small numbers and the vast majority of people in the pandemic have followed the rules and played their part.

“It is more important than ever that people are responsible — not only stick to the rules but within the rules restrict social contact as much as is possible because this is deadly serious.”

When he was later asked by the BBC's Andrew Marr if police would prevent people from leaving Tier 4 regions, Mr Hancock insisted: “Of course.

“I’ve spoken to the Home Secretary [Priti Patel] and the British Transport Police’s responsibility is to police the transport system.”

An initial ban would last until Britain leaves the EU on January 1, but the source added Berlin is already “working on measures” to extend the flight ban beyond that date.

It comes after a German government official earlier told the DPA news agency restrictions on flights were a “serious option”.

Ireland has also announced similar measures banning flights from the UK for the first time in history.

Some countries wanted to stay neutral: How Russia's invasion has quickly reshaped Europe

What is Maundy Thursday? Meaning explained – The Sun

Who was Sierra Jenkins and what was her cause of death?