Lava, smoke and poisonous gases continued to pour from the volcano on La Palma overnight – causing toxic ash to rain down on the island.

Locals have ben warned to wash their vegetables and clothes to avoid ingesting the ash, as the eruption shows no sign of slowing down five days after it started.

A river of lava spewed from the crater is still inching its way towards the ocean, burning up homes and farms in its path.

Meanwhile effects are also being felt further afield, with a large plume of sulphur dioxide gas due to blow into Europe today, possibly falling as acid rain.

The same cloud will reach the UK by Sunday, though observers say by that point the chances of it affecting the weather will be ‘very small.’ 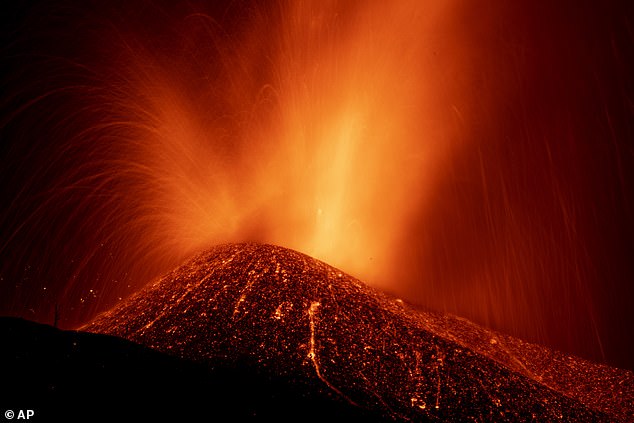 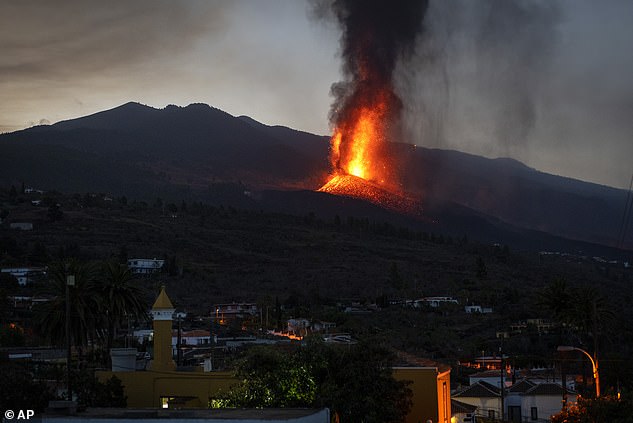 A thick plume of smoke rose from the eruption site this morning, blanketing parts of the island in toxic ash as people were told to wash their food to avoid eating it 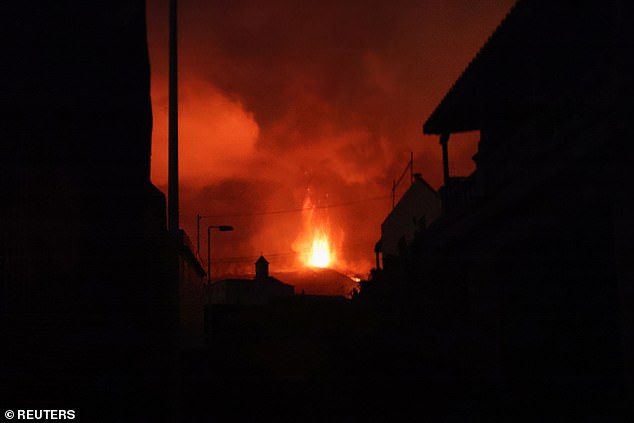 Five days after the eruption began it shows no sign of slowing down, with experts warning it could last until November 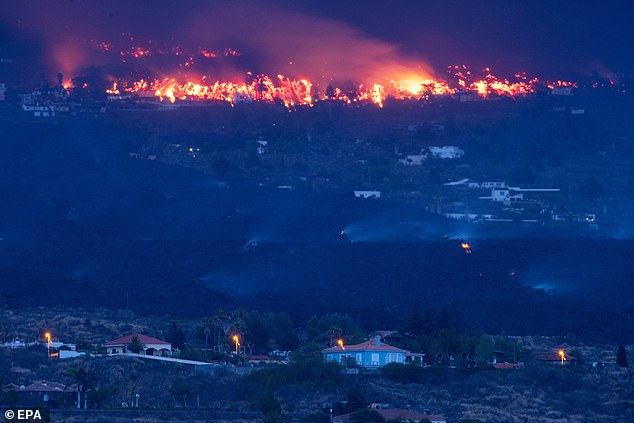 Lava rolls over houses in the village of Todoque, next to Los Llanos de Aridane, in La Palma

Volcanologists monitoring the eruption warned on Wednesday that it had entered an ‘explosive’ new phase and was likely to kick out more ash and smoke as a result.

That was in evidence overnight, with footage showing lava being thrown hundreds of feet into the air from one of the main vents with a thick cloud of black smoke rising into the air at first light this morning.

Meanwhile data from EU weather satellites showed the progress of the lava field as it spreads out from the eruption site, revealing that it barely shifted on Wednesday and is still more than a mile from the ocean.

Scientists had initially predicted that the molten rock would reach the sea on Tuesday, producing a cloud of toxic gas as it mixed with sea water but making it less damaging to homes and other buildings on land.

But yesterday experts admitted it may never reach the sea, instead spreading out like a pancake – destroying more homes and farmland than initially anticipated.

EU monitors said early Thursday that the total number of buildings destroyed has now risen to 350, 30 more than the previous evening.

The number of acres burned up by the lava is now at 410, the same analysts said, 40 more than the previous evening.

It is unclear exactly how long the eruption will last, but most experts agree it will continue for at least several weeks and possibly up to two months.

Property portal Idealista estimated the volcano had so far destroyed property worth around £75million, the the island’s president has said the total damages bill is likely to be in excess of £340million.

‘Everything that started on Sunday as something out of the ordinary, something beautiful to watch, turned into a tragedy the next day,’ said Nancy, who owns a local jewellery business.

‘I have many friends there, families who have lost everything. Our hearts are broken.’

Spanish banking associations offered to provide vacant properties held by banks to people who have lost their homes.

Fortunately, nobody has been injured or killed in the eruption as scientists were given early warning signs via earthquake data that allowed evacuation order to be prepared ahead of time.

A cluster of earthquakes has been ongoing since early last week, but it has since emerged that scientists were able to warn as far back as January that an eruption was likely. 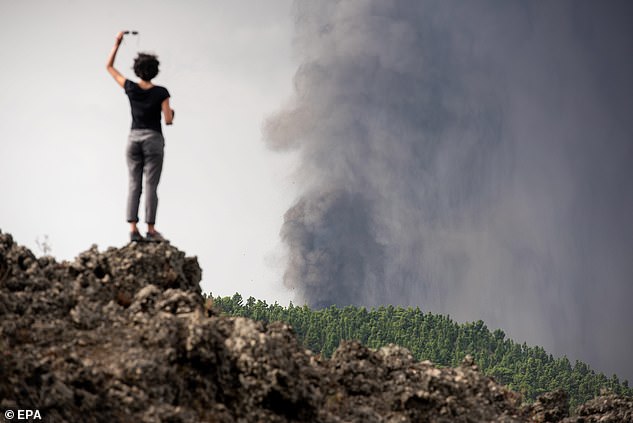 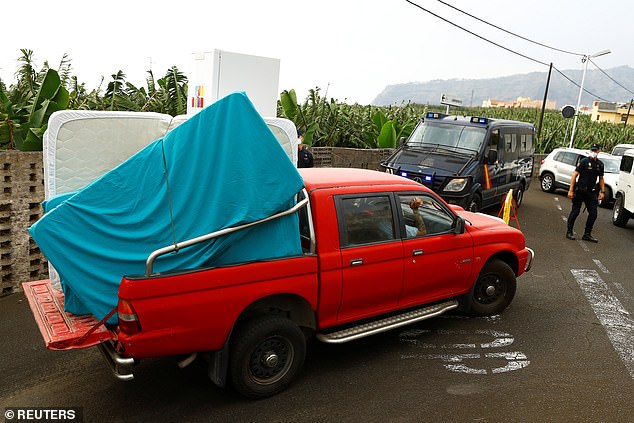 Residents drive a vehicle carrying their belongings as they evacuate following the eruption of a volcano on the Island of La Palma, in Todoque 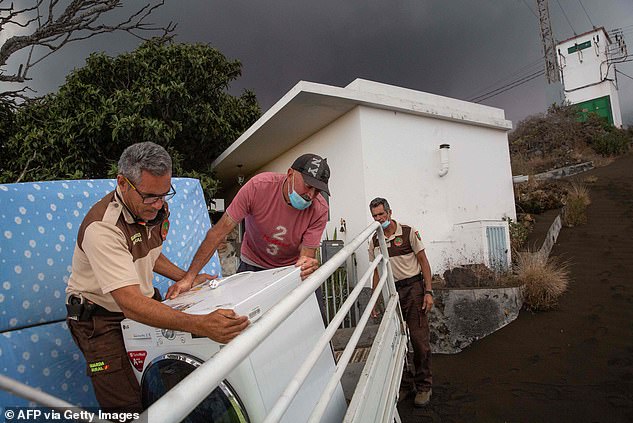 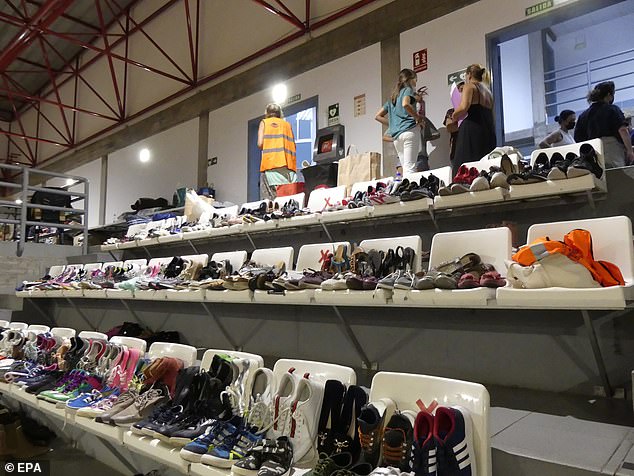 People who have been evacuated from their homes settle into temporary accommodation at a sports pavilion in Los Llanos de Aridane, La Palma

Geoscientist José Fernández told El Pais that examination of historical records revealed volcanic activity underneath the island had restarted sometime around 2009 or 2010, and had been intensifying ever since.

Two earthquake clusters were then recorded in 2017 and 2018, but were not accompanied by a significant ‘bulge’ in the ground – usually an indicator that magma is building up underneath the surface.

But that changed in recent years, with Fernandez and his team concluding that pockets of magma had begun building up between five and six miles underneath the Cumbre Vieja volcanic range – where the current eruption is taking place.

‘It is of critical importance to continue monitoring the current evolution of the unrest, particularly considering the recent increase in seismic activity on the island,’ the study concluded.

Some 6,000 locals have been evacuated from their homes as a result of the eruption, with King Felipe and Queen Letizia due to visit them today – along with Prime Minister Pedro Sanchez.

Mr Sanchez has already visited the island once since the eruption began, helping to oversee the rescue efforts before flying to the UN summit in New York.

Now the summit is over, he will return to the island to help give humanitarian assistance to those affected by the blast – alongside the Spanish royals. 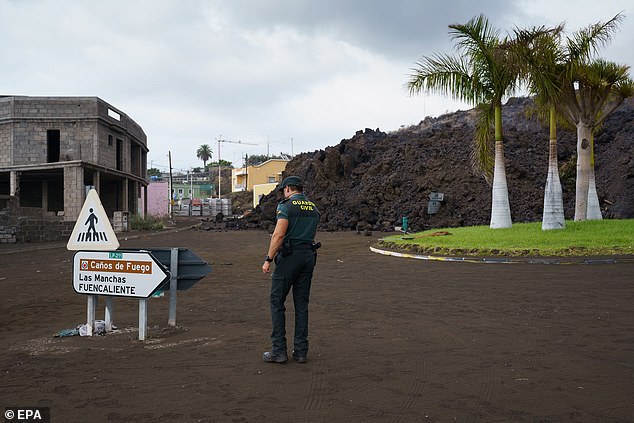 Lava has been piling up to 40ft high as it flows out of the volcano and across the island, inundating villages and swallowing buildings whole 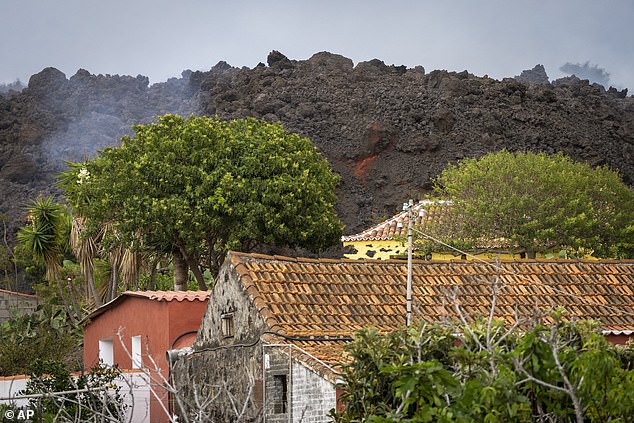 A river of molten rock looms over the top of houses in the village of Todoque, La Palma 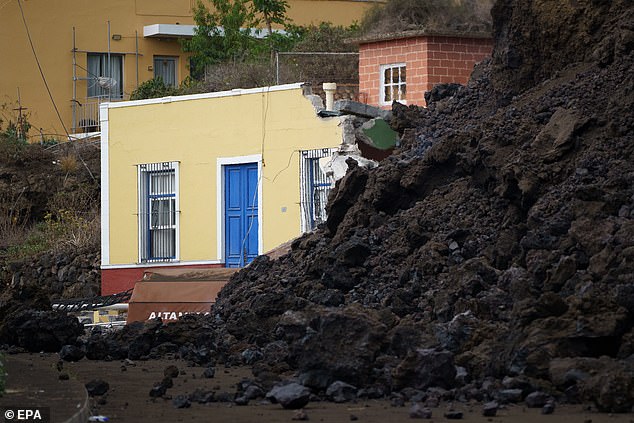 A house damaged by large amounts of volcanic lava is seen in the village of Todoque, La Palma

Official Covid R rate stays stable at 1.2 to 1.4 as cases start to 'level off'