Canberra – The suddenness and brutality of Russia’s recent actions and the threats they posed to world peace were shocking and deeply depressing, the Prime Minister (Mr Menzies) told the House of Representatives.

He added that Russia’s actions had not come as a complete surprise. 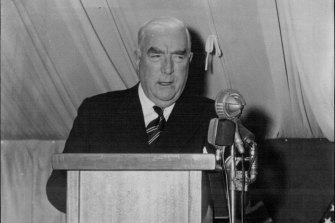 Russia’s resumption of atmosphere tests made the U.S. decision essential to the security of the free nations.

“So long as the Soviet Union refuses to conclude and effective agreement for the prohibition and control of nuclear tests, we will be left in the grim position that the only assurance that its leaders will not resort to the ultimate weapon is the knowledge that it’s use would mean their own annihilation,” Mr Menzies added.

“I should still like to hope that in the larger interests of mankind, the Soviet leaders could recover something of the spirit of moderation and cooperation which marked the recent Antarctic conference in Canberra and that the ban on nuclear tests, with proper control and safeguards, will become universal. 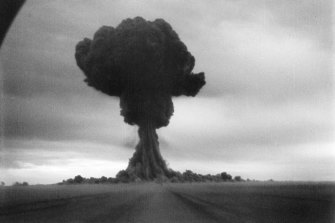 “Until it does, the free nations can place no reliance on Soviet professions of concern for mankind.

“Nor can they accept as genuine the Soviet claim to be the champion of general and complete disarmament.”

Mr Menzies said the record made it clear that the Soviet Union had from the outset treated the whole issue of nuclear test bans with complete cynicism.

It had recklessly pursued what it conceived as its national interest yet at the same time playing on the hopes and fears of the millions of peace-loving people throughout the world.

The events of the past few days showed how much faith could be placed in Soviet assurances.

It was also clear that while professing to negotiate at Geneva, the Russians were making detailed preparations for the current series of tests.

No doubt as soon as the series had been completed there would be yet another Soviet proposal for an unconditional suspension on both sides, with the Communist propaganda machine fully mobilised to denounce the United States if it continued the tests it had now been forced to undertake.

Mr Menzies said the Australian Government commended the patience and restraint – contrasting sharply with the Soviet approach – which the Western leaders had shown throughout the long and fruitless negotiations at Geneva.

Still more commendable were the West’s persistent and imaginative efforts to seek out every possibility for agreement and, in recent days, to salvage something from the wreck.

Mr Menzies outline the history and recent developments in negotiations with Russia and the U.S. on the suspension of nuclear tests.

He said Russia had rejected the joint British-American offer of a suspension of tests and gone on to conduct three further atmospheric tests of nuclear devices.

The Russian Premier (Mr Khrushchev), in rejecting the Western offer, had claimed that a suspension agreement must be considered in the wider context of general and complete disarmament.

Russia’s reaction to the offer provided a complete test of the good faith and pacific intentions of the Communists.

They had failed in that test.

In contradiction to Mr Khrushchev’s repeated statement on the need to protect the world from the dangers of radioactive fallout, they had brushed aside the offer of an agreement which would have done just that.

Mr Menzies said the Soviet claim that it was not prepared to conclude partial disarmament or suspension agreements, but wished to consider all those problems in the context of general and complete disarmament was a transparent propaganda device.

The West had always believed that a major step towards general disarmament would be the conclusion of a nuclear test ban treaty.

Some progress had been made towards the establishment of such a treaty.

Yet the Soviet Union, by its present actions, seemed prepared to nullify the progress already made.

The debate was adjourned.