Melbourne’s roads are expected to be jammed with traffic today because of the nationwide 24-hour strike by 60,000 railwaymen. 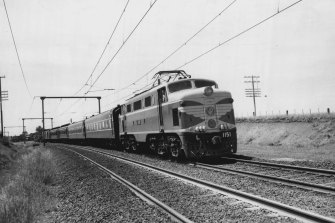 Parking space in the city and seats in trams, buses and taxis will be hard to get.

About 250,000 suburban travellers will have to find alternative transport or stay at home.

Another 12,000 country and interstate train passengers in Victoria will also be affected by the strike, which began at midnight.

Leaders of the two big railway unions, the ARU and the AFULE, said last night the strike would go on as planned, but the men had been told to resume work at midnight tonight.

The unions are defying a no-strike order issued by the Commonwealth Industrial Court in a special sitting on Saturday.

The court inserted a strike ban clause in the railways award, to operate for three months on the application of the NSW Commissioner for Railways.

The unions can be find a maximum of $1000 for every day they disobey the clause.

The Victorian secretary of the ARU (Mr J. J. Brown) said last night there had been no developments in the dispute since the Industrial Court decision.

The strike would not extend beyond midnight tonight.

Commissioner H. G. Neil of the Arbitration Commission has postponed any consideration of railways matters unil Tuesday, when the men have returned to work.

The State Government and the City Council have taken special action to keep traffic flowing as smoothly as possible and to provide extra parking space.

But the Tramways Board will not attempt to provide extra trams and buses for fear of extending the strike to its own employees.

The ban on private drivers accepting payment for carrying passengers has been lifted for Sydney, but the Transport Minister (Mr Wilcox) said this would not be done in Melbourne.

General Motors-Holden was reported yesterday to have chartered 15 buses from one company to transport workers to and from its Dandenong plant.

The president of the Victorian Employers’ Association (Mr D. V. Peck) said the number of employees absent from work because of the strike should not be very high.

In the last transport strike two years ago, absenteeism was “vey low, considerably less than 10 per cent.”

“This is bushranger action. The union are holding the public to ransom even against the wishes of most of their own members,” he said.

“I have spoken to a number of railway employees, and they’re hostile about being done out of a day’s pay.

“This is an example of a few leaders deciding to think for the men.”

The strike was called over dissatisfaction with the work value decision given by Arbitration Minister W. B. Wilson on October 18.

Why a hantavirus pandemic is unlikely to happen

Coronavirus self-isolation advice – how to prepare for lockdown – The Sun