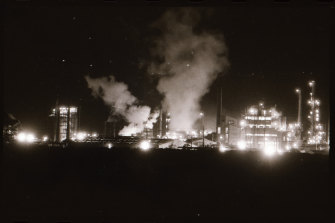 The explosion at the Altona chemical plant.Credit:The Age Archives

Three men were injured, one of them seriously, in a gas explosion at a giant petrochemical works in Altona last night.

Police at one stage considered evacuating the area because of fears the resulting fire could envelop the whole plant.

Police evacuated the Altona Petrochemical Co. Ltd. site in Maidstone Street, closed off surrounding streets and asked nearby residents to stay indoors and prepare for evacuation. But firemen were able to control the fire in about 30 minutes.

Superintendent Len Hubbard, of the Metropolitan Fire Brigade, said an ethylene gas pipeline at the plant had ruptured at 8.15 pm and caught fire.

Three plant workers who were trying to stop a gas leak were burnt in the explosion and were taken to the Royal Melbourne and Alfred hospitals.

A company spokesman said last night that Albyn Archer, 60, of Altona, was in the Alfred Hospital in a critical condition with burns to 72 per cent of his body.

A 38-year-old factory worker, Jerry Creaney, taken to the Royal Melbourne Hospital is also critical. Willi Bock, 27, of Deer Park, is in a fair condition.

Superintendent Hubbard said that quick action by plant workers to reduce the gas pressure in the pipeline had allowed firemen to isolate the fire and bring it under control.

“The whole plant could have gone up and then we would have had a major disaster,” he said.

Superintendent Hubbard estimated that the plant could contain as much as 50,000 tonnes of gas and flammable products. “We all might not have been here,” he said.

The company spokesman said a section of piping had overheated due to a malfunction. Workmen had tried to keep it cool but the pipe split and caught fire. About 20 fire brigade units attended the fire.

Late last night, plant workers and firemen were burning off about 40 tonnes of ethylene gas from a section of the plant to further reduce the risk of an explosion.

Superintendent Hubbard said there had been no release of toxic chemicals in the fire and very little damage to the plant. He said there was nothing to suggest negligence or lack of safety precautions by the company.

Boss finds super-rare 6,000-year-old horn in his office and nearly sold it on eBay

Baby, 1, fighting for life with horror frostbite after mum ‘forgot’ about him in disused -32C house