Shootout in the suburbs

A man leant out of the window of a getaway car and fired about 10 shots from a sawn-off .22 calibre rifle at police during a chase in Preston yesterday.

The police fired nine shots at the man. At least one unmarked police car was hit in the crossfire before the 10-minute chase ended at the Northland shopping centre when the man shot himself. 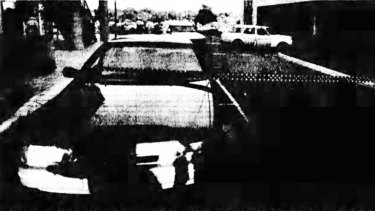 An unmarked cop car bears the scar of a shot fired during the chase. The getaway car is in the background. Credit:The Age Archives

Moments before, the man had run into the shopping centre brandishing the rifle, terrorising shoppers who huddled together and hid as police chased him up stairs and across a walkway to an adjoining car park.

Surrounded by police, the man, aged in his 30s, hid under a car and turned the gun on himself. Last night he was in a stable condition in the Austin Hospital with a gunshot wound to the chin.

Detectives last night were interviewing another man and his 14-year-old son about their involvement in the chase.

The gunman had robbed a Bundoora credit cooperative and was being driven off by a second man and his son when they were spotted by a roving police divisional van, which gave chase.

Detective Inspector Peter Laidler said it was a miracle that police or the public were not hit during the shootout.

Mr Laidler said he was monitoring the chase and shootout on the police radio and had feared a massacre at the shopping centre. “I was listening on the air and I was horrified. He would have to be a very violent person to evade the police in the way that he did,” he said.

One police officer involved in the chase said: “It was quite frightening. It was like something out of a movie; he was just hanging out the window shooting at us. He was a real psycho.”

The assistant commissioner for operations, Mr Gavin Brown, spoke to several police officers involved in the chase and praised them for the way they handled the situation.

The incident began when an armed bandit fled with cash after a robbery at the Plenty Credit Cooperative in Nickson Street, Bundoora, about 4.35 pm.

Mr Laidler said the man fled in a stolen Ford Falcon, which was later dumped In McLeans Road, in Bundoora.

The gunman jumped into a second getaway car, an early-model Ford Falcon station wagon. A man and his 14-year-old son were in the front, and the gunman sat in the back seat.

A passing police divisional van spotted the station wagon travelling along Plenty Road and gave chase. Police units converged on the car when it pulled into the Target shopping centre in Plenty Road, Reservoir.

Mr Laidler said police followed the car, reaching speeds of 100 kmh. He said that during the chase, the gunman leant out and fired at police cars, hitting at least one. Police returned fire.

Police chased the car into the rear car park of the Northland shopping centre, where more shots were fired at police. Police grabbed the father and son before the gunman ran into the shopping centre.

The gunman ran up a flight of stairs and across a walkway to the top level of the car park. He was spotted by a police helicopter hovering above. He then ran down to the next level and bid under a car.

Police surrounded the area and ordered the man to give himself up, but be placed his gun under his chin and shot himself.

Founder of White Stuff REFUSES to tear down development