The fatal cost of passing the buck

THE AXE fell on Ansett yesterday at 2am. In the dead of night, three voluntary administrators who had been appointed 30 hours earlier signed the death warrant on 65 years of aviation history.

The airline that still carried the name of its pioneering founder, Sir Reginald Ansett, was grounded, with 16,000 Australian jobs trashed, the result of a debacle that earlier this week had led Australian trade union leader Greg Combet to the conclusion: “These people couldn’t even run a chook raffle.” 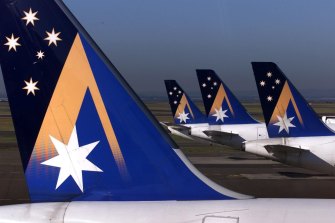 He was talking about Air New Zealand, which on Wednesday dumped its debt-laden subsidiary, Ansett Australia, into the laps of the administrators to save its own hide.

Amid a political uproar on both sides of the Tasman, the Air New Zealand board had cut a deal with its government in Wellington and its two Singapore-based backers, Singapore Airlines and Brierley Investments, that would give it the $500million, and possibly more, it needed to keep flying.

When the plan was announced on Thursday afternoon, Air New Zealand’s acting chairman, Jim Farmer, made it clear that Air New Zealand felt it had no legal or moral obligation towards Ansett‘s employees.

It had written off its Australian airline to the tune of $1.6 billion and it was blaming Ansett’s former owners, the transport group TNT and, more particularly, Rupert Murdoch’s News Ltd, for the mess.

They, not Air New Zealand, had milked the airline dry and run its ageing aircraft into the ground, it claimed.

Yet, as the events of the past seven days unfolded, it became evident that Air New Zealand bought Ansett without doing the necessary due diligence. It had paid $475 million to TNT for half of Ansett in 1996 and $580 million to News Ltd for the other half in April last year.

It then assumed Ansett‘s management and proceeded to retrench most of the executives in its Melbourne headquarters, replacing them with its own people in Auckland. It was a move that had a devastating impact on the morale of its Australian workers. 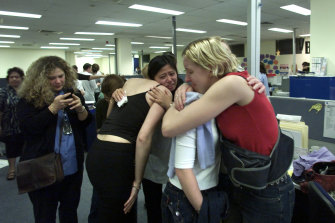 In 1999, Ansett had produced a net profit of $156million, up from $29million in 1998. On the surface, at least, Ansett‘s balance sheet was looking good. There had been losses in 1993 and 1997 but, otherwise, it was all profits and these appeared to be growing, even though it was well known that since 1992 Qantas had chipped away at Ansett‘s 60per cent market dominance.

Air New Zealand was so anxious to get hold of Ansett that it was prepared to throw logic out of the window and ride roughshod over its Star Alliance partner, Singapore Airlines. Together, the two airlines could have created a healthy formidable opposition to Qantas on domestic and international fronts.

Singapore Airlines, which is Australia’s de facto second international airline, wanted a stake in Ansett as a feed to its Europe and Asia routes. It was prepared to buy News Ltd’s half of Ansett and form a partnership with Air New Zealand that would have been a natural fit.

But the New Zealand airline, focused on its need to expand its Pacific routes, exercised its pre-emptive right to buy all of Ansett while offering Singapore a 25per cent non-voting stake in Air New Zealand. It was happy to take Singapore’s money for a slice of the action so long as Air New Zealand had all the say.

Even before it assumed control of Ansett, the New Zealand airline was well aware of the Ansett fleet’s age and the need to spend at least $4billion in an accelerated replacement program.

Everyone associated with the aviation industry knew it. The 69-strong fleet comprised eight types of aircraft. 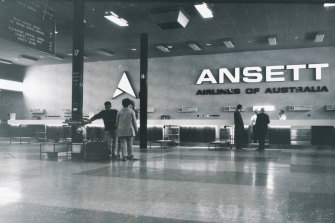 The Ansett section of the passenger terminal at Essendon Airport in 1969.Credit:The Age Archives

They had been bought by Sir Peter Abeles, the former TNT chief who ran Ansett as a personal pet project back in the 1980s and early 1990s.

Sir Peter had bought so many different types of aircraft, when three or four would have done, because he couldn’t resist the lure of a shiny new toy. He was also prepared to take on high levels of debt to fund his aircraft acquisitions, as well as the extravagant redevelopment of Hayman Island into Australia’s most luxurious resort.

Yet, on Thursday, an unsightly row erupted between Air New Zealand chief executive Gary Toomey and News Ltd’s chief operating officer, Peter Macourt, over who was responsible for the poor condition of the aircraft.

Toomey sought to shift the blame for Ansett‘s maintenance problems on News Ltd, saying his News-appointed predecessor, Rod Edington, had embarked on a cost-cutting program to ensure Ansett‘s competitiveness with Qantas.

He said that 12 aircraft were flying at the end of their maintenance cycle and soon would have to go overseas because their own engineering departments did not have the capacity to do the work. There would be two or three aircraft in heavy maintenance at any one time and the costs of bringing replacements into service was too much to bear.

Macourt hit back: “It won’t wash to apportion blame to previous owners when it is clear the problems confronting Ansett arose during Air New Zealand’s time at the helm.”

But that also appears to be only half the truth. Edington, who left Ansett for the top job at British Airways in April last year, had failed to gain board approval for replacement 767s. And Ansett‘s systemic maintenance problems surfaced almost immediately after Air New Zealand took over. 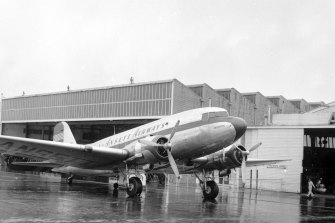 They led the Civil Aviation Safety Authority to ground the entire 767 fleet over Easter, which is traditionally the busiest weekend of the year for Australia’s domestic airlines. It was the second public holiday embarrassment for Ansett, which discovered overdue maintenance problems days before the Christmas holiday rush and voluntarily took some of its 767s out of service.

It was later revealed that maintenance advisories from the aircraft manufacturers, Boeing, were being received at the Tullamarine maintenance facility but they were not being acted upon.

A situation like that does not develop overnight and during the Easter grounding evidence emerged of an important Boeing service bulletin that went missing for nine months. It had been issued by the manufacturer in early March last year, a month before Air New Zealand assumed management of Ansett.

Victor Jose, a metals division organiser of the Australian Manufacturing Workers Union said at the time that staff had been complaining to Ansett for several years that cost-cutting and inadequate training had denuded the industry of an adequate workforce.

For Toomey, the maintenance debacle amounted to a baptism by fire. Last Christmas he was on “gardening leave”, having already left Qantas where he had been co-chief operating officer but yet to take up his appointment as Air New Zealand chief executive.

Later he told interviewers that he had spent much of his leave on the phone sorting out the mess and, on arrival, in Auckland at the start of the year he hit the ground running.

The departures of Edington from Ansett in April, 2000, and chief executive Jim McCrea from Air New Zealand in July, 2000, left a leadership vacuum at that the chairman, Sir Selwyn Cushing, sought to fill until Toomey’s arrival in January.

Sir Selwyn, long-standing chairman at Brierley Investments, had no aviation management experience and, despite his upbeat approach to the job, Toomey arrived to find that little had been done to sort out Ansett‘s difficulties. It was losing money and the losses were growing by the day as the Australian dollar exchange rate plummeted and fuel prices skyrocketed.

Under Sir Selwyn’s chairmanship from 1998 to his retirement in May, Air New Zealand had moved from profit into losses. Last year, it reported a $454million loss, but refused to say how much was ascribed to Ansett. This week it reported an unaudited net loss of $1.2 billion. It wrote down Ansett‘s assets by $1.11 billion and added a further write down of $521 million in Ansett‘s accounts to June 30.

A week ago, after months of agitation from both the Australian and New Zealand governments, Air New Zealand finally revealed that Ansett was losing $1.3million a day, to which had to be added interest on borrowings of $500,000 a day. And that set off the dramatic chain reaction that ended with Ansett‘s late-night closure.

On July 12, Air New Zealand had submitted a refinancing package to the New Zealand cabinet. Singapore was prepared to inject capital to cover the Ansett fleet upgrade if the government would allow it to lift its 25 per cent stake to 49 per cent.

The Air New Zealand board insists that it told the government at that time that Ansett had lost $270 million in the year to June 30, but in parliament on Tuesday New Zealand finance minister Trevor Mallard denied the government had received such a figure.

The government had put off making a decision on Singapore Airlines’ shareholding and instead let it be known that 35 per cent was a more acceptable stake for Singapore. Ansett‘s financial haemorrhaging had by this time developed into a major crisis, especially after flamboyant Sir Richard Branson tore up what he said was Air New Zealand’s $250 million cheque to buy his Virgin Blue.

Air New Zealand in desperation looked elsewhere for someone to take Ansett off its hands. Singapore Airlines declined; Qantas flew a team to Auckland to take a look at Ansett‘s books before it, too, declined to buy the airline. Meanwhile, the Australian Government, through acting Prime Minister and Transport Minister John Anderson, repeatedly stated it would not spend a dollar to rescue Ansett.

Events had begun to take a dramatic turn. A week ago, the paths of Treasurer Peter Costello and NZ Finance Minister Michael Cullen crossed in Souzhou, China, but their discussions came to nothing.

After a weekend of long discussions in Auckland and Canberra, the writing was on the wall. Any Air New Zealand refinancing package would not include Ansett. The New Zealand Government saw Ansett as a separate matter.

On Tuesday, the Australian Government began putting together a crisis plan to help stranded passengers should Ansett close. Then, on Wednesday, Air New Zealand discarded the subsidiary that 18 months ago it insisted on taking over. It appointed Greg Hall, Peter Hedge and Alan Watson, three accountants from PricewaterhouseCoopers, as voluntary administrators to do what it could with Ansett and it subsidiaries.

While Ansett’s staff clamored yesterday for entitlements, Qantas, Virgin Blue, and possibly Singapore Airlines and other hopefuls began the process of picking at the carcase.

Connecticut rapist arrested in Florida after 44 years on the run