THIS is the moment a tower block in Gaza collapses live on air behind a BBC news reporter, as bombs rain from the sky.

BBC Arabic reporter Adnan Elbursh was reporting from the scene on Wednesday, about the continuation of deadly fighting between Israel and Palestinian militants. 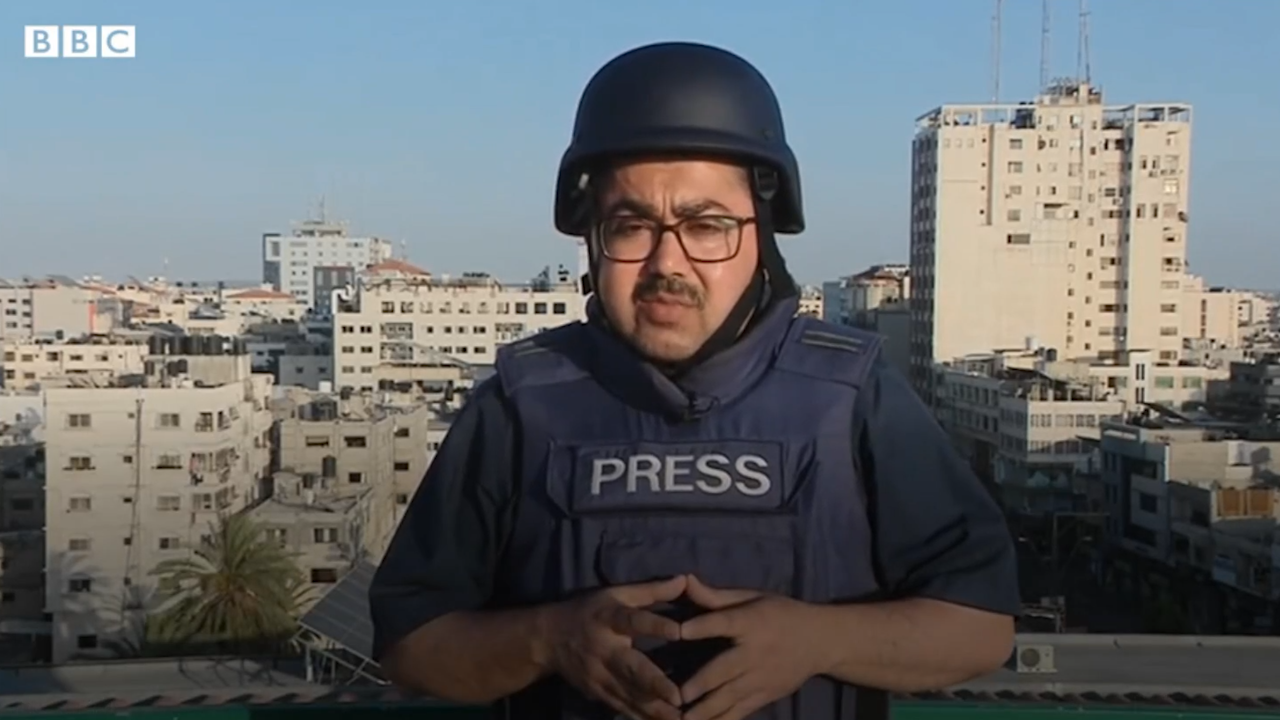 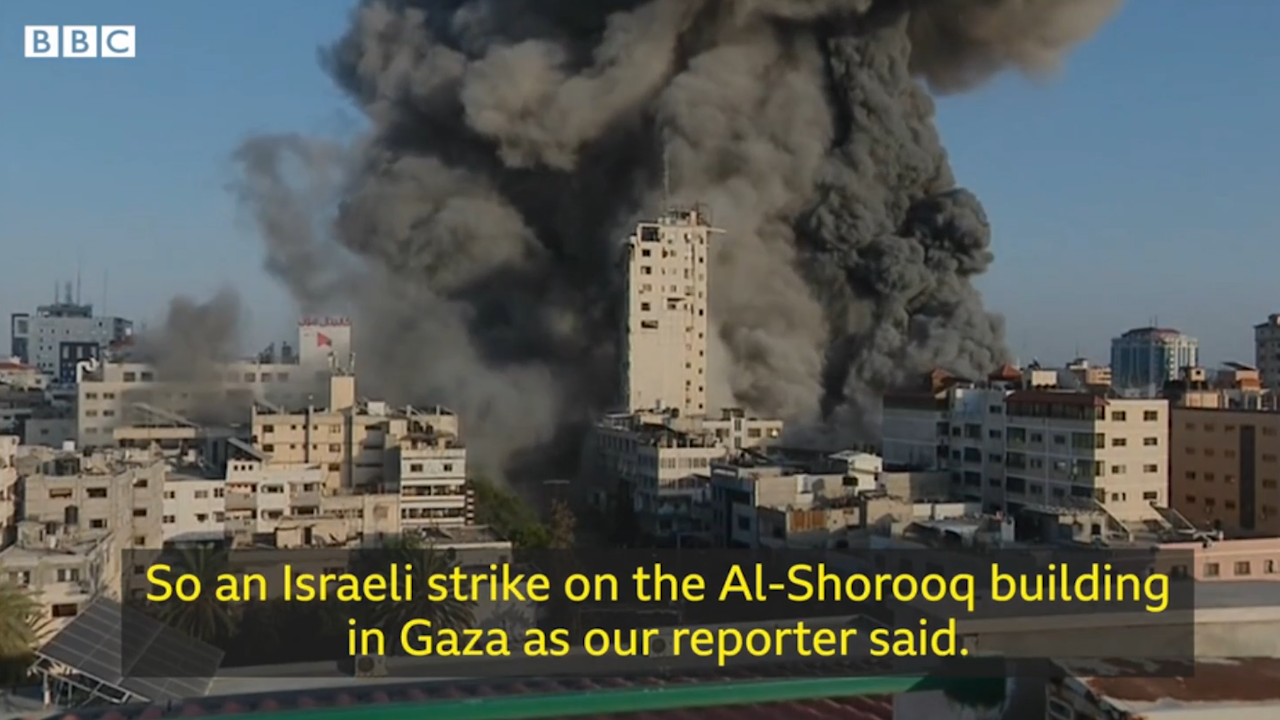 The broadcast happened in the midst of a week during which Israel has bombarded Gaza with air strikes as 9,000 reserve troops have been called up amid escalating violence with Hamas.

At least 119 Palestinians have died in the violence so far including 31 children and nine women.

Elbursh appears to receive a signal from someone behind the camera, as he moves forward, shifting out of shot, just before a bomb strikes the ground in the city behind him, causing plumes of smoke to drift up into the sky.

The camera zooms in to capture the action, and Elbursh continues his broadcast.

Seconds later, a second bomb can be heard exploding, and more smoke emerges to the left of where the first bomb hit.

Elbursh can be heard continuing to speak in Arabic. Presenter Mohamed Seif then cuts over him, with captions reading “Adnan, are you all right? Please end the live if you are in danger”.

“I can see that the strikes are just across from where you are.”

The camera flicks to another shot, and a bomb strikes the city behind the broadcast, this time, a louder blast which explodes at the base of a tall tower block.

The block instantly begins to collapse as a result of the blast.

A mix of voices speak over the video, with captions again flicking across the screen.

“The building collapsed. It was brought down,” was his response.

Seif said: “I hope you are all right. There seems to have been warning shots and now the building is totally targeted”. 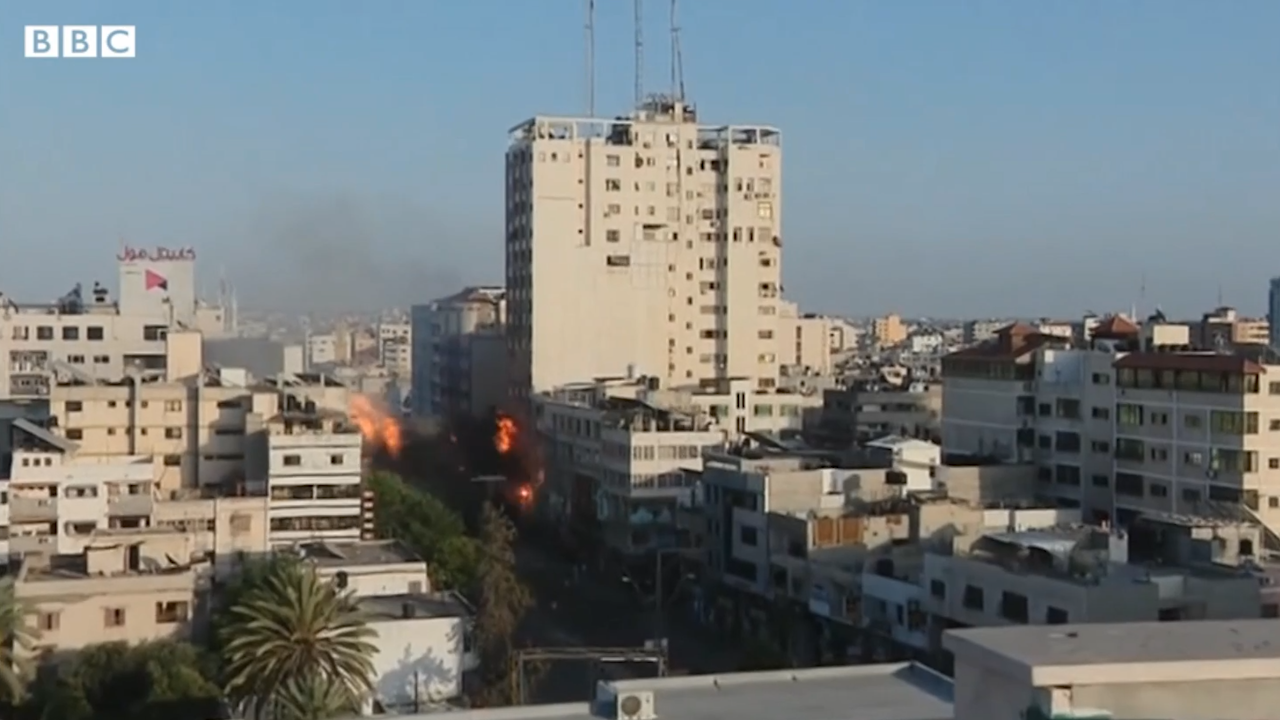 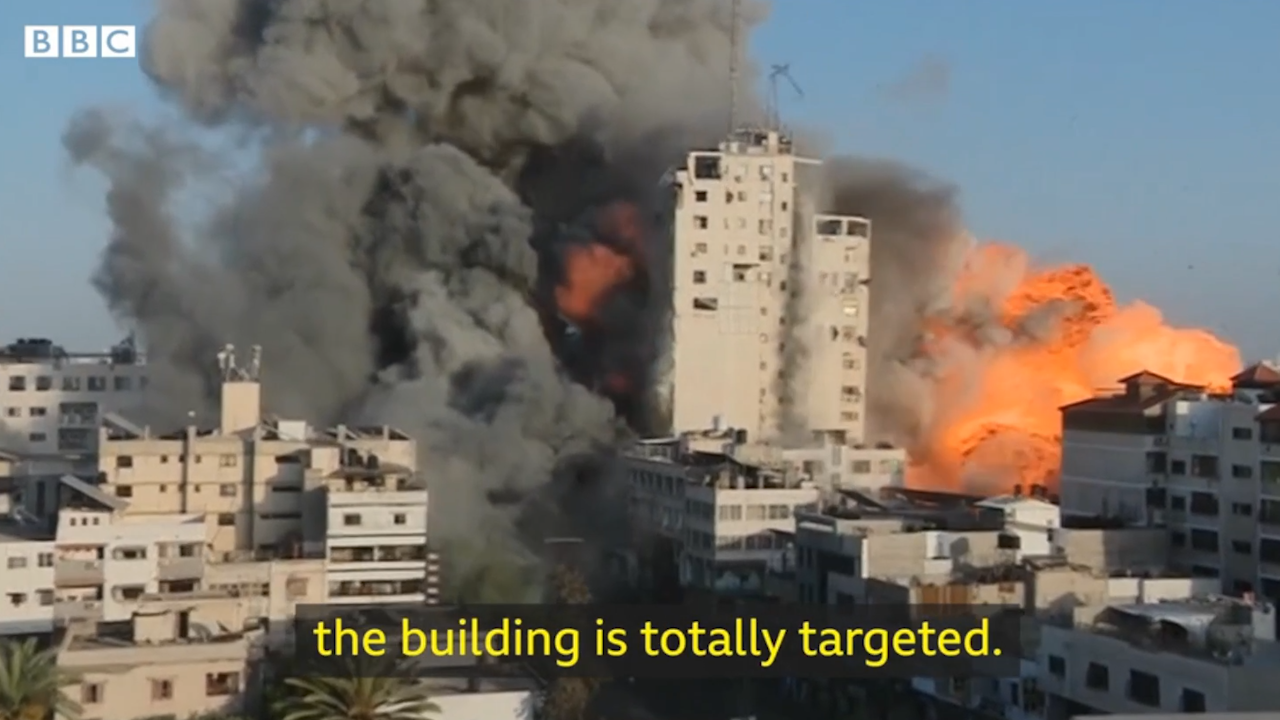 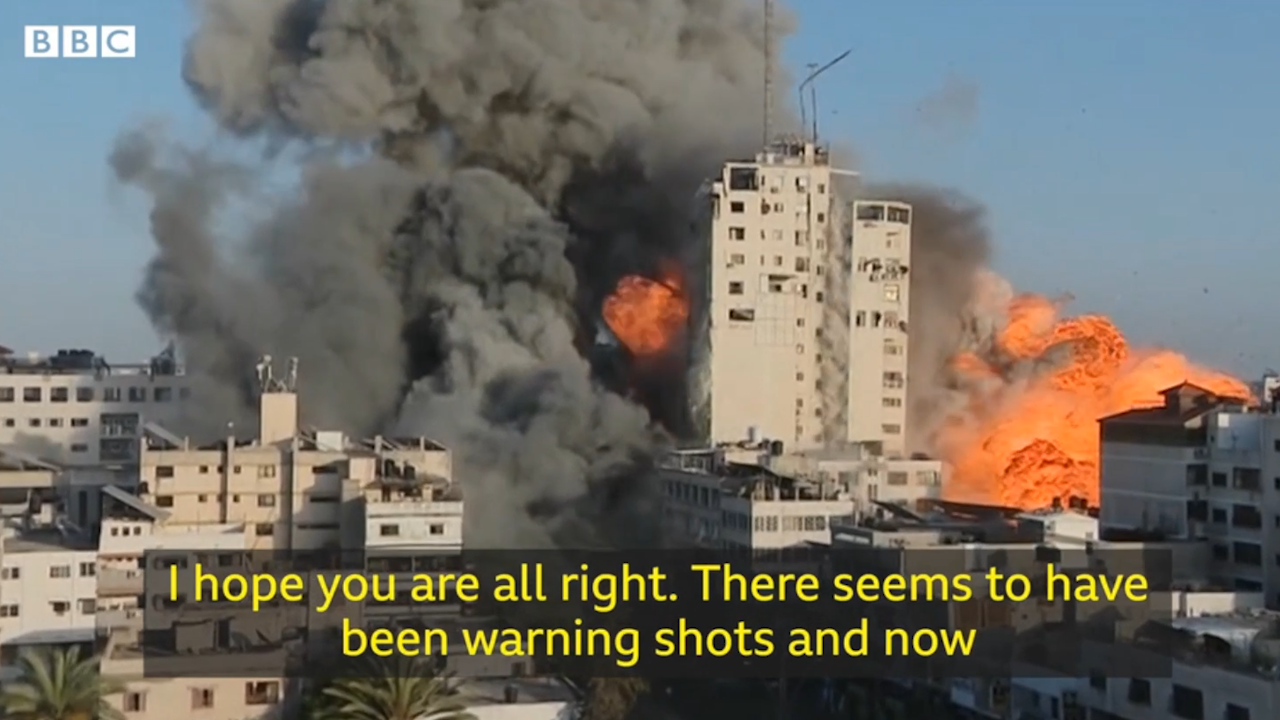 “So an Israeli strike on the Al-Shorooq building in Gaza as our reporter said.”

Hamas has launched more than 1,800 rockets from the blockaded Palestinian coastal strip this week.

Israeli tanks and soldiers are continuing to mass at the border and 9,000 reserve troops were drafted to support a planned ground offensive.

But Hamas fighters dug into defensive positions are certain to put up fierce resistance if such a mission is launched — sparking fears of a bloodbath.

Meanwhile, Palestinian militants continued to fire volleys of rockets. Last night another 220 were unleashed, with Hamas boasting it had enough weapons stored to continue barrages for two months.

The confirmed death toll stands at 119 Palestinians killed — including 31 children and 19 women, with 830 wounded.

Nine Israelis have been killed, including one soldier and a six-year-old boy.

Israeli PM Benjamin Netanyahu rejected a Hamas ceasefire offer made via Russia and warned strikes against the Jewish state’s Arab enemy would “increase in force”.

Street clashes between Jewish and Israeli-Arab mobs, who have previously lived side-by-side have flared up, increasing fears of all-out civil war.

Defence minister Benny Gantz ordered a “massive reinforcement” of security to crack down on some of the worst internal unrest seen since Israel was founded 73 years ago.

Israeli president Reuven Rivlin even called a radio phone-in to issue an emotional appeal for calm.

He begged: “Please stop this madness.” 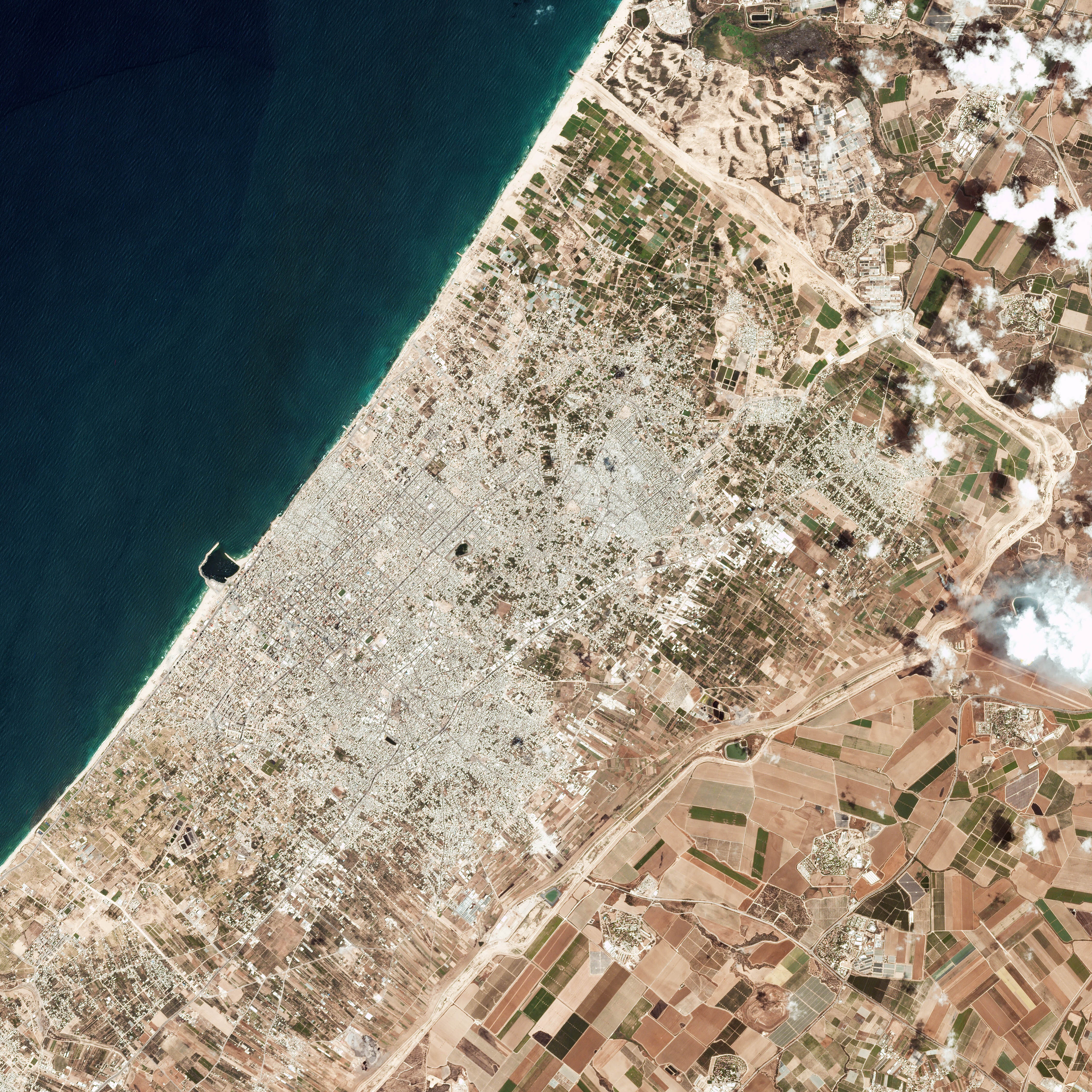 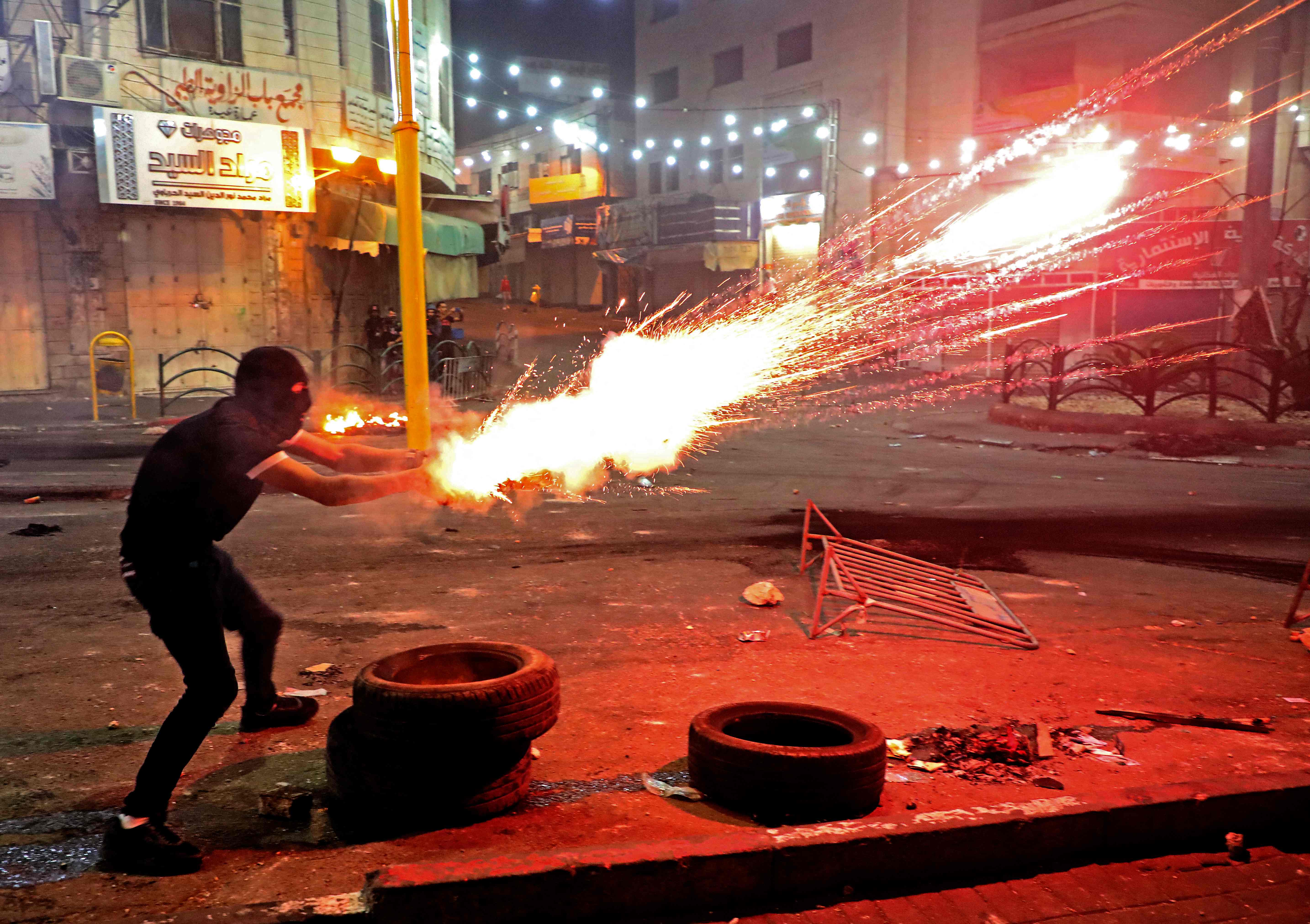 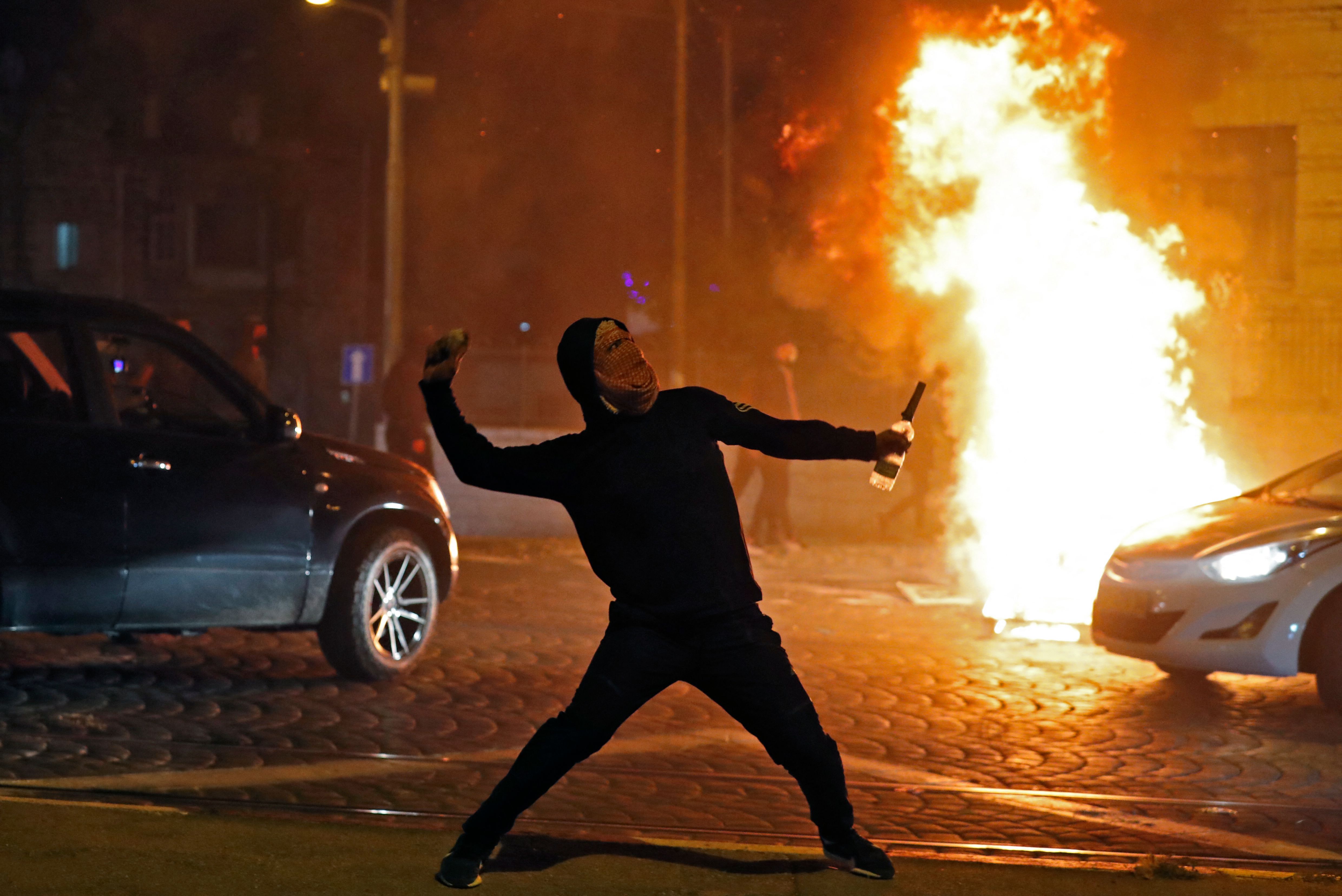