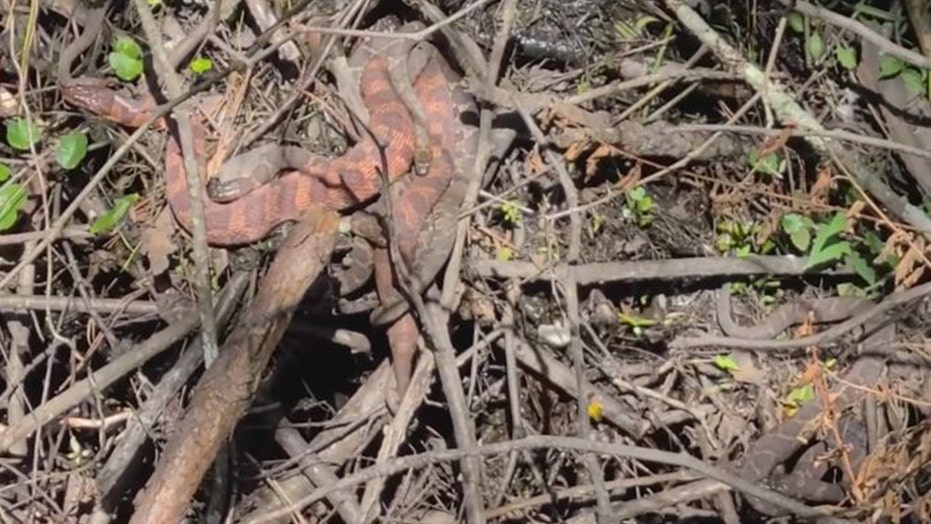 Couple out for run stumble upon dozens of snakes

Two runners in Georgia stumbled across a rather large group of snakes alongside a popular Big Creek Greenway trail.

Lydia du Preez captured a Facebook video of the stunning find after she and her husband stopped for a rest on a trail bridge inside the greenway, according to Storyful – a social media intelligence agency.

Several snakes appeared to have taken residence under the trail bridge, which is situated near a small flow of running water and plenty of fallen branches.

SNAKE CATCHER REMOVED A GIANT PYTHON AFTER A COUPLE REPORTED THEIR CLOGGED DRAIN: ‘NOT WHAT I WAS EXPECTING’

“There are snakes everywhere,” du Preez can be heard saying in the video she shared to the Focus on Forsyth County Ga. Facebook group on Thursday, May 6.

“I’ve never seen this many snakes together in one area – in one spot,” she explained after pointing out multiple snakes hidden among the brown foliage. “I would like to know what types of snakes all of these are.”

Fox News reached out to du Preez for comment but did not immediately hear back.

However, her video has since racked up more than 575 Facebook reactions, 50 comments and 628 shares.

A few commenters theorized that the snakes are banded watersnakes, which are a mid-sized aquatic breed that has conservation protection in the state of Georgia, according to the University of Georgia’s Savannah River Ecology Laboratory.

“This time of year you will see them piled up together,” another Facebook user commented. “It’s breeding season. Give them some privacy.”

Meanwhile, a different Facebook user joked: “That’s a lot of danger noodles in one place!”

The Peach State is home to 46 types of snake, six of which are considered venomous, according to the Georgia Department of Natural Resource’s wildlife division.

Up to 250 royal staff 'are being offered voluntary redundancy'