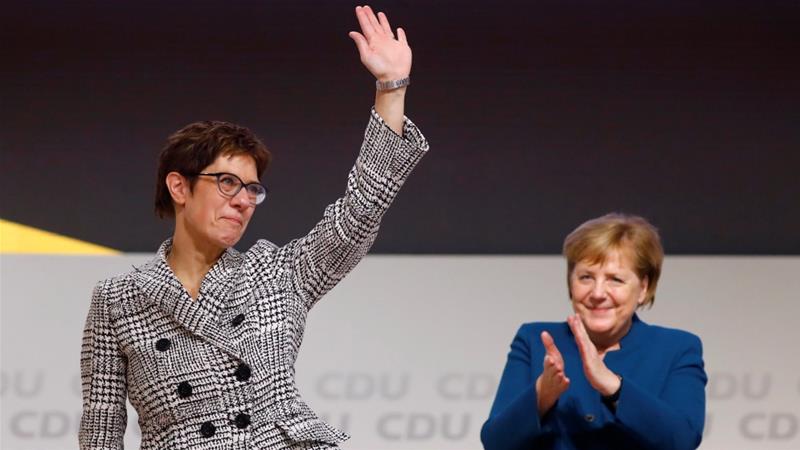 Chancellor Angela Merkel will be replaced by Annegret Kramp-Karrenbauer as the leader of Germany’s centre-right Christian Democratic Union (CDU) party.

The choice was made by 999 voting delegates at a party congress in German city of Hamburg on Friday, the day Merkel was seen off with a nine-minute standing ovation after 18 years as the party chief.

Friday’s two-round vote came weeks after Merkel, 64, decided in October not to seek a re-election to the post, but expressed her readiness to stay on as Germany’s chancellor for the remaining three years of her term.

Kramp-Karrenbauer – a Merkel protege – defeated Friedrich Merz, a Merkel rival who has questioned the constitutional guarantee of asylum to all “politically persecuted” in the second round with 517 votes against 482.

In the first round, Kramp-Karrenbauer won 450 votes, Merz took 392 votes and Health Minister Jens Spahn was eliminated with 157 votes.

In 2002, Merz lost to Merkel too. In Friday’s vote, he was backed by CDU members tired of Merkel’s consensual politics, including party veteran Wolfgang Schaeuble.

Merz, 63, took clear positions that appealed to rank-and-file party members hungry for a more clearly defined party after 13 years under Merkel as chancellor. He wanted tax cuts, a stronger EU and a more robust approach to challenging the far right.

“She was seen by many as the continuity candidate as the protege of Angela Merkel. And therefore it will be plain sailing,” he said.

“We can expect these two ladies in many press conferences over the course of weeks, months and few years even where there will be a slow transition from Angela Merkel to Annegret Kramp-Karrenbauer.

“Kramp-Karrenbauer will perhaps be the leading campaigner for the CDU in the state elections next year. So there will be an orderly transition.”

Ahead of the party congress, Economy Minister Peter Altmaier, a Merkel ally, said, “I am convinced that with Annegret Kramp-Karrenbauer we have the best chance of the CDU winning an election.”

She would be the most dangerous candidate to face the centre-left Social Democrats and the ecologist Greens, he added.

Kramp-Karrenbauer’s trump card was her record as a former state premier in Saarland, where she led a broad coalition with the Greens and pro-business Free Democrats, alliance-building skills useful in Germany’s fractured political landscape.

The 56-year-old has differentiated herself from Merkel on social and foreign policy by voting in favour of quotas for women on corporate boards, which was opposed by Merkel, and by taking a tougher line on Russia.

But on what lies ahead for the CDU, Kramp-Karrenbauer said, “I have no particular recipe.”

BLM protesters in Seattle claim in suit that expensive gear to protect them from cops prices them out of civil rights: report

Railway bosses plan to lay on 1,000 extra trains EVERY DAY