Twitter permanently suspended Trump on Friday, citing a ‘risk of further incitement of violence’ in the wake of the storming of the U.S. Capitol by supporters of the outgoing president.

It said that that recent Trump tweets amounted to glorification of violence when read in the context of the anarchy at the Capitol.

Asked about Twitter’s decision, Merkel’s spokesman, Steffen Seibert, said the operators of social media platforms ‘bear great responsibility for political communication not being poisoned by hatred, by lies and by incitement to violence.’

He said it’s right not to ‘stand back’ when such content is posted, for example by flagging it.

But Seibert also said that the freedom of opinion is a fundamental right of ‘elementary significance.’ 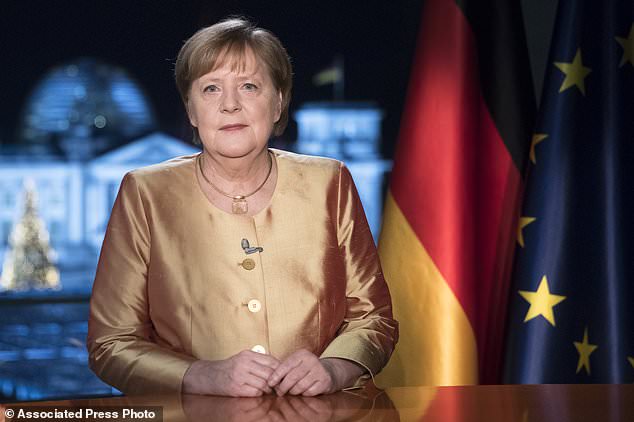 When asked about Donald Trump’s Twitter ban, Merkel’s spokesman said that the freedom of opinion is a fundamental right of ‘elementary significance.’ 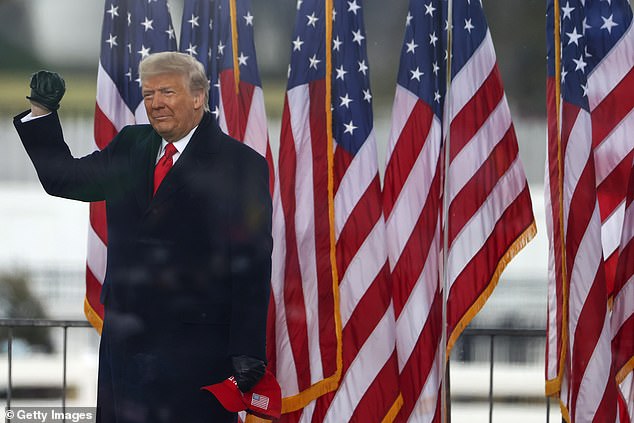 Twitter permanently suspended Trump on Friday, citing a ‘risk of further incitement of violence’ in the wake of the storming of the U.S. Capitol by supporters of the outgoing president.

“This fundamental right can be intervened in, but according to the law and within the framework defined by legislators – not according to a decision by the management of social media platforms,’ he told reporters in Berlin.

‘Seen from this angle, the chancellor considers it problematic that the accounts of the U.S. president have now been permanently blocked.’

Merkel herself does not have a Twitter account, although Seibert does and many German government ministers do.

Though Twitter hasn’t issued any further statements after its banning of Trump , it appears to be conducting a mass purge of any accounts connected with the ‘QAnon’ conspiracy theory, banning Trump loyalists Mike Flynn, Sidney Powell, and thousands of others.

The apparent effect has been to massively shrink the follower counts of high-profile conservative figures and Trump allies.

In a video message on Facebook, Don Jr claimed that he had lost 100,000 Twitter followers in the past day.

Secretary of State Mike Pompeo tweeted an image of an analytical tool showing key elected Democrats gaining tens of thousands of followers, while key Republicans were losing them at the same rate.

‘This is how you create an echo chamber…’ Pompeo wrote.

Don Jr added: ‘The world is laughing at America & Mao, Lenin, & Stalin are smiling. Big tech is able to censor the President? Free speech is dead & controlled by leftist overlords,’ Don Trump Jr said in a tweet on Saturday, urging followers to join his mailing list, ‘In case I’m next.’

In his tweets on Saturday, Don Jr pointed out that Iran’s Supreme Leader, Ayatollah Ali Khamenei, who tweeted last year calling for ‘the elimination of the Zionist regime’ through ‘firm, armed resistance,’ still has multiple official Twitter accounts. 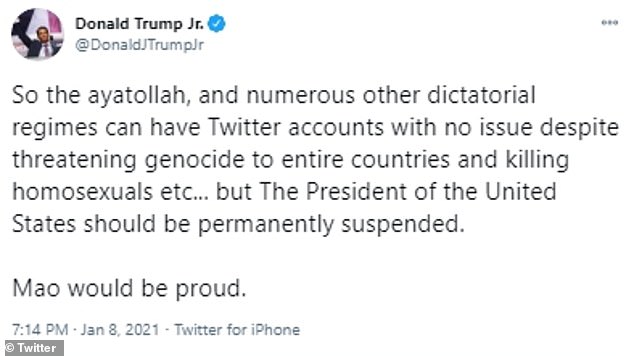 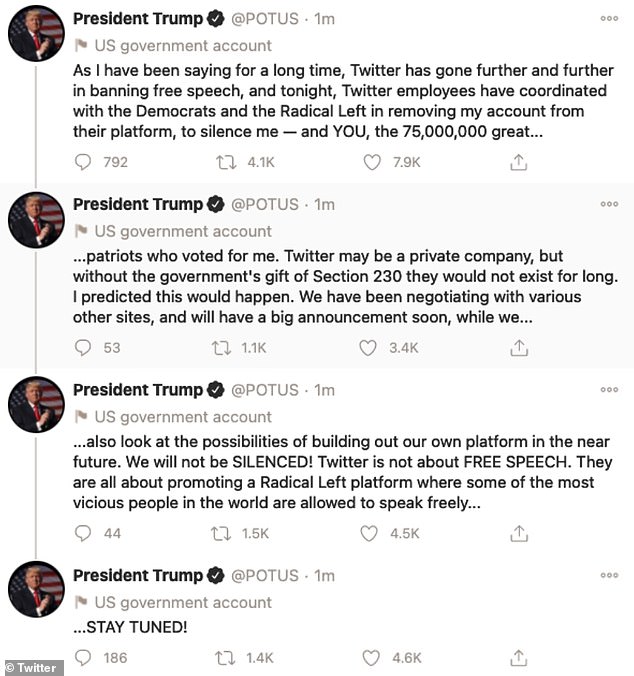 President Trump on Friday night found a loophole around his Twitter ban by using the @POTUS account. The tweets claimed that he may set up his own social media platform but were quickly deleted again

Amid the bans, Trump loyalists appear to be abandoning Twitter in droves, signing up for Gab and Parler, social media sites that bill themselves as ‘free-speech’ alternatives to Twitter.

But Parler on Monday disappeared from the web and vanished from the Apple and Google app stores after tech giants cut ties with the platform in the wake of the deadly mob attack at the US Capitol.

Parler went offline shortly after 3am EST after Amazon booted the platform off its web hosting service, effectively shutting it down until it can find a new hosting partner.

Parler, which was used by some of the rioters before the insurrection, was the most-downloaded app in the Apple store on Friday before both Apple and Google cut off its access to their app stores.

Gab claimed that it was seeing more than 10,000 new signups per hour on Saturday.

The Gab app was banned from the Apple and Google app stores years ago amid accusations that it was a cesspool of racist ideology.

After he was banned on Friday, Trump had initially appeared to find a way around his permanent Twitter ban by using the @POTUS handle before his tweets were swiftly deleted.

He urged his supporters to ‘STAY TUNED!’ as he claimed that Twitter is working with ‘Radical Left and Dems’ to silence him and to silence those who voted for him.

‘As I have been saying for a long time, Twitter has gone further and further in banning free speech, and tonight, Twitter employees have coordinated with the Democrats and the Radical Left in removing my account from their platform, to silence me — and YOU, the 75,000,000 great patriots who voted for me,’ he wrote.