Global coronavirus cases have now pushed past 20 million, according to a Reuters tally, with the United States, Brazil and India accounting for more than half of all known infections.

The respiratory disease has infected at least four times the average number of people struck down with severe influenza illnesses annually, according to the World Health Organisation. 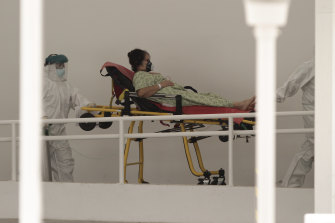 A coronavirus patient is transferred to a hospital in San Salvador, El Salvador.Credit:AP

The death toll from COVID-19, meanwhile, at more than 728,000 has outpaced the upper range of annual deaths from the flu.

The Reuters tally, which is based on government reports, shows the disease is accelerating. It took almost six months to reach 10 million cases after the first infection was reported in Wuhan, China, in early January. It took just 43 days to double that tally to 20 million.

The US is responsible for anout 5 million cases, Brazil 3 million and India 2 million. Russia and South Africa round out the top ten.

The pandemic is accelerating fastest in Latin America which accounts for almost 28 per cent of the world's cases and more than 30 per cent of deaths, according to the Reuters tally.

With the first wave of the virus yet to peak in some countries and a resurgence of cases in others, governments are still divided in their responses. Some countries are reintroducing strict public health measures, while others continue to relax restrictions.

WHO 'only 10 per cent of way' to funding fight

There is a "vast global gap" between funds needed to fight the coronavirus pandemic and funds committed, World Health Organisation chief Tedros Adhanom Ghebreyesus says, and the WHO is only "10 per cent of the way" there.

More than 19.92 million people have been reported to be infected by the coronavirus globally and 729,883​ have died, according to a Reuters tally.

Infections have been reported in more than 210 countries and territories since the first cases were identified in China in December 2019.

"The coming three months present a crucial window of opportunity to scale-up the impact of the ACT Accelerator for global impact," Tedros on Monday told a briefing in Geneva, referring to the "Access to COVID-19 Tools" initiative.

"However to exploit this window, we have to fundamentally scale up the way we are funding the ACT Accelerator and prioritise the use of new tools. There is a vast global gap between our ambition for the ACT Accelerator, and the amount of funds that have been committed."

He said the WHO was only "10 per cent of the way" to funding the billions of dollars required.

"For the vaccines alone, over $US100 billion will be needed," Tedros said. This sounds like lot of money and it is.

"But it's small in comparison to the $US10 trillion that have already been invested by G20 countries in fiscal stimulus to deal with the consequences of the pandemic so far."

However, he said he saw "green shoots of hope".

Dr Mike Ryan, head of WHO's emergencies program, said the coronavirus was simple, brutal and cruel.

Ryan said that Brazil was registering 50,000-60,000 cases per day. "Brazil is sustaining a very high level of epidemic, the curve is somewhat flattened, but it's not going down and the system is under great deal of pressure.

"In a situation like that, hydroxychloroquine is not a solution and not a silver bullet," he added, referring to the malaria drug which President Jair Bolsonaro has encouraged Brazilians to take against COVID-19. 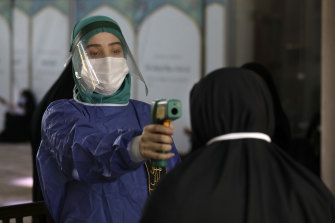 A volunteer checks the temperature of a worshipper as she enters the mosque of Tehran University.Credit:AP

On Sunday, the daily quoted Mohammad Reza Mahboobfar, an epidemiologist the paper said had worked on the government's anti-coronavirus campaign, as saying the true number of cases and deaths in Iran could be 20 times the number reported by the Health Ministry.

He also said the virus was detected in Iran a month earlier than February 19, when authorities announced the first confirmed case. He said they held up the announcement until after the commemorations of the anniversary of the 1979 Islamic Revolution and parliamentary elections earlier that month.

"The administration resorted to secrecy for political and security reasons," he said, and only provided "engineered statistics" to the public.

Health Ministry spokeswoman Sima Sadat Lari rejected the allegations and said Mahboobfar had no role in the government's anti-coronavirus campaign. IRNA quoted her as saying the ministry has provided figures in a "transparent" way.

"The Health Ministry is not a political body and health of people is its main priority," she said.

Antonio Banderas says he's tested positive for COVID-19 and is celebrating his 60th birthday in quarantine.

The Spanish actor announced his positive test in a post on Monday on Instagram. Banderas said he would spend his time in isolation reading, writing and "making plans to begin to give meaning to my 60th year to which I arrive full of enthusiasm".

"I would like to add that I am relatively well, just a little more tired than usual and hoping to recover as soon as possible following medical instructions that I hope will allow me to overcome the infection that I and so many people in the world are suffering from," wrote Banderas.

Earlier this year, Banderas was nominated for the Academy Award for best actor for his performance in Pedro Almodóvar’s Pain & Glory. 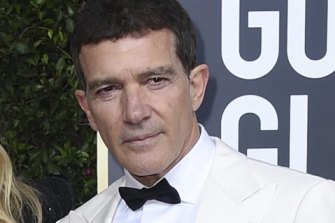 Antonio Banderas says he has tested positive for coronavirus.Credit:Jordan Strauss/Invision/AP

Virus 'on its way back' in Denmark

Denmark’s health minister says the virus is "on its way back", and has announced local measures to contain it.

"We are intervening with local measures that are fitted to local needs," Magnus Heunicke said on Monday. "We are doing that to avoid a total lockdown of the country."

Increases in the number of cases were reported in Aarhus — Denmark’s second-largest city — and in six other places geographically spread across the country of nearly 6 million.

Since Sunday, Denmark has recorded 76 new cases, totaling 14,815 cases and 620 deaths. More than half of the new cases are in Aarhus,

The decision comes after Aarhus made it mandatory as of Monday to use face masks on public transportation.

These winless NFL teams have something Giants, Jets don’t