Washington: Donald Trump and his Vice-President Mike Pence, have met at the White House, according to two people familiar with the matter – the first time the men have spoken since the US President incited a riot at the US Capitol while Pence was presiding over the formal affirmation of Trump's re-election defeat.

According to a senior administration official, Trump and Pence had a "good conversation" on Monday evening (Tuesday AEDT) and "pledged to continue to work on behalf of the country for the remainder of their term". 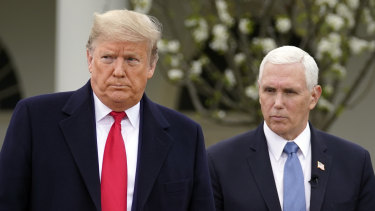 Pence was furious at Trump after hundreds of the President's supporters breached the Capitol on Wednesday, US time, disrupting the count of Electoral College votes and causing the Vice-President and Congress members to flee the House and Senate chambers.

Democratic members of Congress have called on Pence to invoke the 25th Amendment to the Constitution, which allows the vice-president and a majority of the cabinet to remove the president from office. But Pence has privately dismissed the idea as not feasible, according to one person familiar with the matter.

The people asked not to be identified because the meeting between Trump and Pence wasn't announced.

On Tuesday (AEDT) House Democrats introduced articles of impeachment against Trump for inciting an insurrection.