Idaho Republican lawmaker says stay-at-home orders are ‘no different’ to sending Jews to concentration camps and compares GOP Gov. Brad Little to Hitler after he extended lockdowns until the end of April

An Idaho Republican lawmaker has said stay-at-home orders are ‘no different’ to sending Jews to concentration camps.

Speaking to Houston-based podcast host Jess Fields in the interview posted online Thursday Scott said: ‘When you have government telling you that your business is essential or non-essential, yours is non-essential and someone else’s is essential, we have a problem there.’

More than 1,000 protesters gathered at the Idaho Statehouse Friday afternoon.

Scott said the Great Fire of 1910 – which killed 86 people – would have been an emergency worthy of the shut down order.

She added: ‘You can’t take away people’s lives and property without compensation, and that’s exactly what he would be doing. I mean, they are already calling him Little Hitler — Gov. Little Hitler.’ 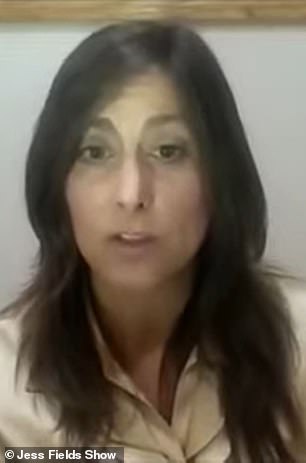 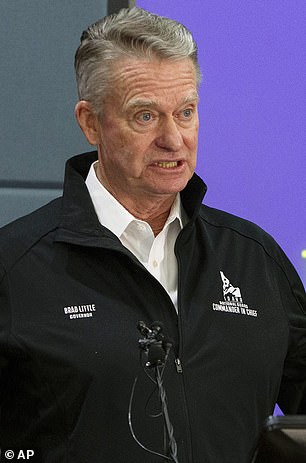 State representative Heather Scott, left, was speaking after Governor Brad Little, right, extended the statewide lockdowns until the end of April on Wednesday

Scott also compared COVID-19 to the number of people killed by flu each year.

She noted around 34,000 people are estimated to have died in the US from the flu across the whole of last year.

COVID-19 has killed more than 40,000 Americans in around two months.

Little announced Wednesday that the order would extend to the end of April in the effort to slow the spread of coronavirus, although he lightened some restrictions so nonessential businesses could begin providing curbside service.

Still, the news was met with derision by some members of the far-right in Idaho, and some libertarian, gun-rights and anti-vaccine organizations began directing members to defy the order.

Scott added: ‘I think people will start educating others, and people will be more and more vocal until they will say, ‘Enough of this’, and put the pressure – hopefully political pressure – on him. That’s what I would hope for.

‘We have real men in Idaho. We have some real men…we’ve got real men that know their rights and God-fearing men.’

Most at the Idaho protest were standing shoulder-to-shoulder and not wearing masks. Some carried signs claiming the coronavirus is a hoax, while others held signs with slogans like, ‘All workers are essential’ and ‘Freedom not fear.’

The effect of the coronavirus on the economy has been dire. In Idaho, nearly 96,000 people have filed for unemployment since Little first declared a state of emergency on March 13. That’s far more than the number of claims filed in Idaho during all of 2019.

‘Mass murder and genocide is not the same thing as deciding which businesses should essentially stay open and which should stay closed,’ Rabbi Tamar Malino of Spokane’s Temple Beth Shalom said.

Scott had earlier called the governmental response to the virus ‘a way to chip away at the foundations of our Constitution to push a global, socialistic agenda while in the midst of a national emergency.’ 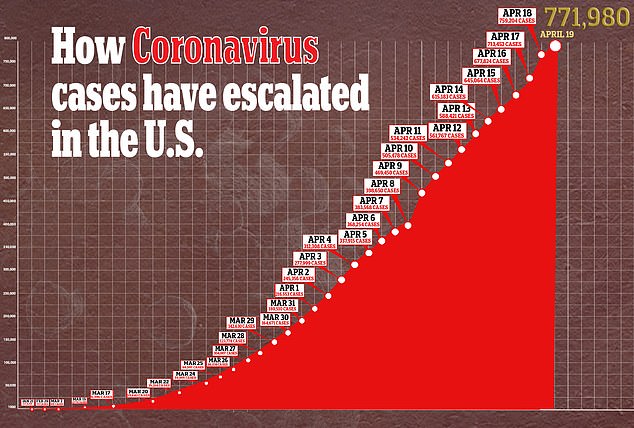 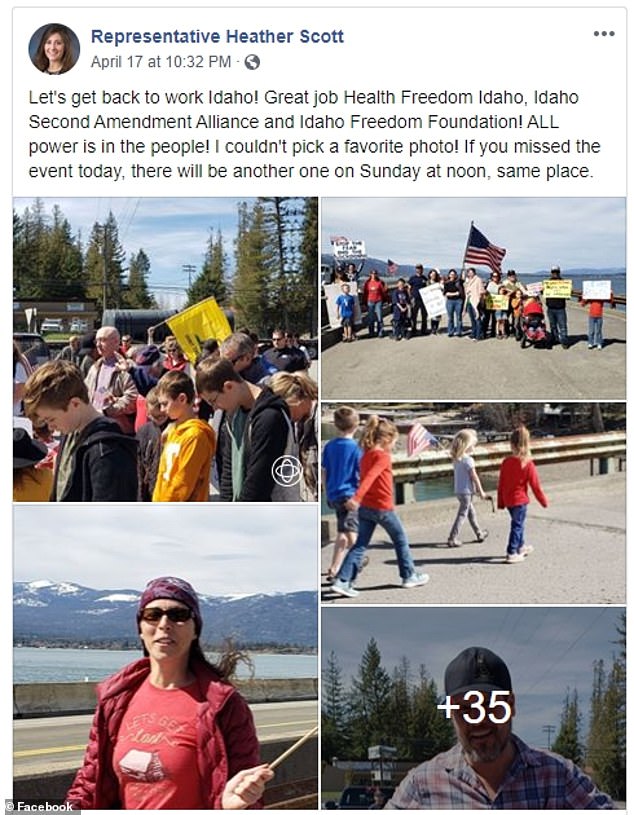 Similar protests have been held across the country, with groups pushing back against stay-at-home orders in places like Michigan, Texas and Virginia.

In the southern Utah city of St. George, several dozen people protested Wednesday to show their displeasure with the closure of businesses.

The debate is not likely to end soon, with some health experts warning that returning to normal activity too early could lead to a resurgence of the virus.

More than 1,600 Idaho residents have COVID-19, according to a tally by Johns Hopkins University. At least 44 Idahoans have died.

Naked ramblers cause outrage by stripping off yards from a school