A firefighter in China has been left with extremely pale and wrinkly feet after tirelessly searching for survivors in a landslide.

A striking picture released by the provincial fire brigade shows the rescuer’s swollen feet shrivelling up like old prunes after being soaked in wet mud while he worked non-stop for over 30 hours.

The unnamed fireman was called to rescue after a landslip caused by heavy rain buried nine people in Hubei province on Wednesday, the authorities said. 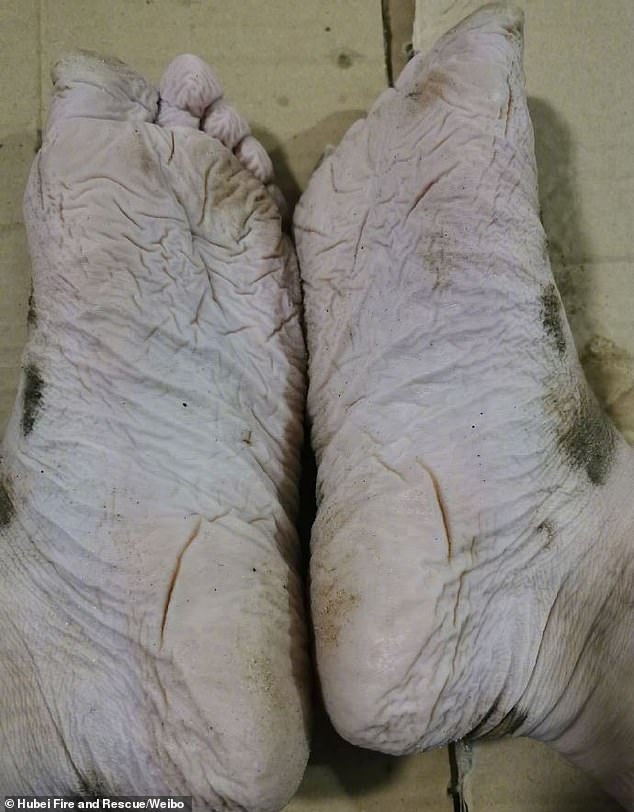 It comes as multiple Chinese provinces have entered ‘wartime mode’ to fight what state media called a ‘flood catastrophe’ as torrential downpours batter the country.

The landslide occurred in the early hours of July 8 in Hubei’s Huangmei county after being hit by severe flooding.

A total of 69 firefighters were called to search for the nine residents buried under the debris of the landslip.

After over 30 hours of rescue, all nine citizens were found. Eight of them had died while one elderly woman survived the accident and is said to be in stable condition, according to Hubei Fire and Rescue.

A picture uploaded by the fire brigade yesterday shows a rescuer’s feet looking extremely swollen and wrinkly after working tirelessly for over 30 hours.

Thousands of web users have been touched by the incredible image after it was shared on Chinese social media.

One commenter wrote: ‘This is heart-breaking. You are a true fighter. Thank you so much for your dedicated service!’

Another one said: ‘Oh my god, so much respect to you! Please stay safe.’ 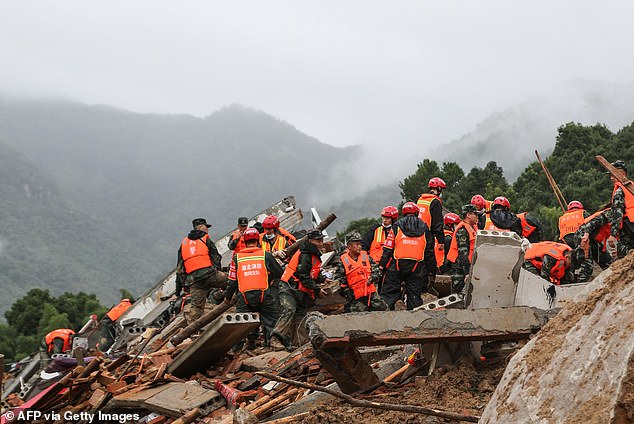 After over 30 hours of rescue, all nine citizens were found. Eight of them died while one elderly woman survived the accident and is said to be in stable condition. Firefighters are pictured at the scene of the landslide that occurred in Huangmei county of China’s central province Hubei 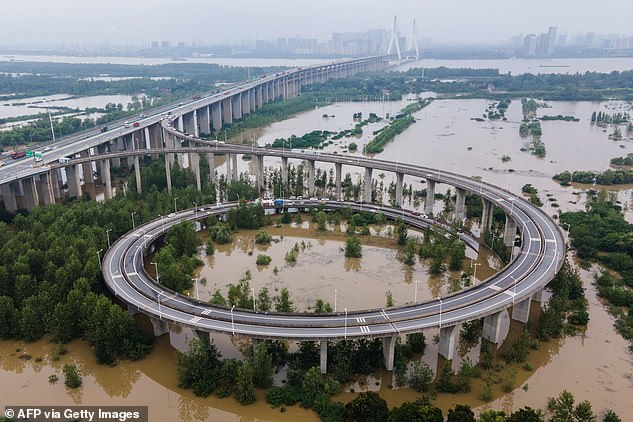 Inundated: This aerial view shows a bridge leading to the inundated Tianxingzhou island, which is set to be a flood flowing zone to relieve pressure from the high level of water in Yangtze River in Wuhan, China’s central Hubei province, on July 13

The news comes Chinese authorities have activated emergency response to severe flooding in provinces including Jiangxi, Hubei, Hunan and Guizhou.

The coronavirus ground zero of Wuhan, through which the mighty Yangtze River winds, is on an expanding list of areas warily watching the rising waters.

Local officials warned that the Yangtze could hit its third-highest levels in history in the city of 11million on Thursday.

At a flood-fighting meeting on Sunday, Wuhan leaders described the situation as ‘extremely severe’.