An already struggling and chaotic Haiti stumbled into an uncertain future Thursday after the assassination of President Jovenel Moïse, followed by a gunfight in which authorities said police killed seven suspects, detained six others and freed three officers being held hostage.

Officials pledged to find all those responsible for the pre-dawn raid on Moïse’s home early Wednesday in which the president was shot to death and his wife, Martine, critically wounded. She was flown to Miami for treatment.

“The pursuit of the mercenaries continues,” Léon Charles, director of Haiti’s National Police, said Wednesday night in announcing the arrest of suspects. “Their fate is fixed: They will fall in the fighting or will be arrested.” 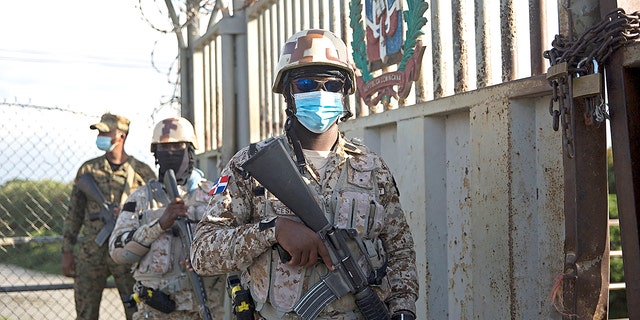 Soldiers guard the Dajabon border crossing between the Dominican Republic and Haiti after the borders were closed due to the assassination perpetrated by an armed group against the president of Haiti, Jovenel Moise, in the early hours of Wednesday, July 7, 2021. (AFP via Getty Images)

On Thursday, Charles told reporters that six suspects had been arrested and seven killed and that police were still looking for more.

Witnesses said two of the suspects were discovered hiding in bushes in Port-au-Prince on Thursday by a crowd, some of whom grabbed the men by their shirts and pants, pushing them and occasionally slapping them.

Police arrived shortly afterward to arrest the men, who were sweating heavily and wearing clothes that seemed to be smeared with mud, an Associated Press journalist at the scene said. Officers placed them in the back of a pickup truck and drove away as the crowd ran after them to the nearby police station.

Once there, some in the crowd chanted: “They killed the president! Give them to us. We’re going to burn them!”

One man was overheard saying that it was unacceptable for foreigners to come to Haiti to kill the country’s leader, referring to reports from officials that the perpetrators spoke Spanish or English.

The crowd later set fire to several abandoned cars riddled with bullet holes that they believed belonged to the suspects, who were white men. The cars didn’t have license plates, and inside one of them was an empty box of bullets and some water.

At a news conference Thursday, Charles, the police chief, asked people to stay calm, go home and let police do their work as he warned that authorities needed evidence they were destroying, including the burned cars.

Officials did not provide any details about the suspects, including their nationalities, nor did they address a motive or say what led police to them. They said only that the attack condemned by Haiti’s main opposition parties and the international community was carried out by “a highly trained and heavily armed group.”

Prime Minister Claude Joseph assumed leadership of Haiti with the backing of police and the military and on Thursday asked people to reopen businesses and go back to work as he ordered the reopening of the international airport.

On Wednesday, Joseph decreed a two-week state of siege following Moïse’s killing, which stunned a nation grappling with some of the Western Hemisphere’s highest poverty, violence and political instability.

Inflation and gang violence have spiraled upward as food and fuel grew scarcer in a country where 60% of Haitians earn less than $2 a day. The increasingly dire situation comes as Haiti is still trying to recover from the devastating 2010 earthquake and Hurricane Matthew in 2016 following a history of dictatorship and political upheaval.

“There is this void now, and they are scared about what will happen to their loved ones,” said Marlene Bastien, executive director of Family Action Network Movement, a group that helps people in Miami’s Little Haiti community. 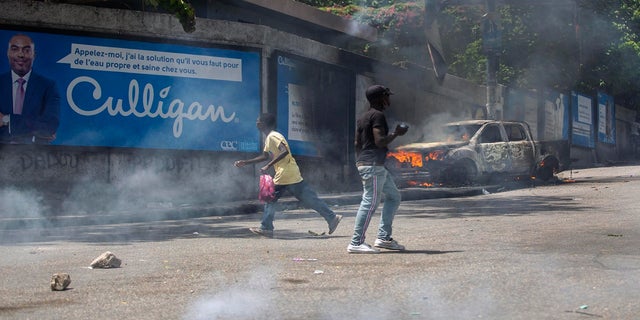 People move past a burning truck outside the police station of Petion Ville during a protest against the assassination of Haitian President Jovenel Moïse in Port-au-Prince, Haiti, Thursday, July 8, 2021. Officials pledged to find all those responsible for the pre-dawn raid on Moïse’s home early Wednesday in which the president was shot to death and his wife, Martine, critically wounded. (AP Photo)

She said it was important for the administration of U.S. President Joe Biden to take a much more active role in supporting attempts at national dialogue in Haiti with the aim of holding free, fair and credible elections.

Bastien said she also wants to see participation of the extensive Haitian diaspora: “No more band-aids. The Haitian people have been crying and suffering for too long.”

Haiti had grown increasingly unstable under Moïse, who had been ruling by decree for more than a year and faced violent protests as critics accused him of trying to amass more power while the opposition demanded he step down.

According to Haiti’s constitution, Moïse should be replaced by the president of Haiti’s Supreme Court, but the chief justice died in recent days from COVID-19, leaving open the question of who might rightfully succeed to the office.

Joseph, meanwhile, was supposed to be replaced by Ariel Henry, a neurosurgeon who had been named prime minister by Moïse a day before the assassination.

Henry told the AP in a brief interview that he is the prime minister, calling it an exceptional and confusing situation. In another interview with Radio Zenith, he said he had no dispute with Joseph. “I only disagree with the fact that people have taken hasty decisions … when the moment demands a little more serenity and maturity,” he said.

Moïse had faced large protests in recent months that turned violent as opposition leaders and their supporters rejected his plans to hold a constitutional referendum with proposals that would strengthen the presidency.

On Thursday, public transportation and street vendors remained scarce, an unusual sight for the normally bustling streets of Port-au-Prince.

Marco Destin, 39, was walking to see his family since no buses, known as tap-taps, were available. He was carrying a loaf of bread for them because they had not left their house since the president’s killing out of fear for their lives.

“Every one at home is sleeping with one eye open and one eye closed,” he said. “If the head of state is not protected, I don’t have any protection whatsoever.” 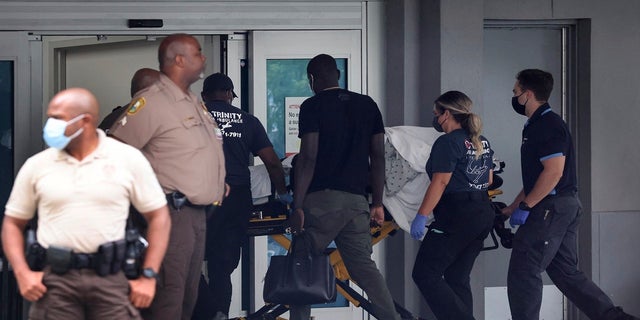 Martine Moise, first lady of Haiti, arrives at Jackson Health System’s Ryder Trauma Center, in Miami, for treatment, Wednesday, July 7, 2021, after being shot multiple times at her home earlier in the day in Port-au-Prince, Haiti. (Miami Herald via AP)

Destin said Haiti has always been a complicated country and that he wasn’t sure what the upcoming days would bring. “Haiti doesn’t know what direction it’s heading in right now,” he said. “To be honest, I don’t know what the solution is. There’s always been a fight for power.”

Gunfire rang out intermittently across the city hours after the killing, a grim reminder of the growing power of gangs that displaced more than 14,700 people last month alone as they torched and ransacked homes in a fight over territory.

Robert Fatton, a Haitian politics expert at the University of Virginia, said gangs were a force to contend with and it isn’t certain Haiti’s security forces can enforce a state of siege.

“It’s a really explosive situation,” he said, adding that foreign intervention with a U.N.-type military presence is a possibility. “Whether Claude Joseph manages to stay in power is a huge question. It will be very difficult to do so if he doesn’t create a government of national unity.”

Joseph told the AP that he supports an international investigation into the assassination and believes elections scheduled for later this year should be held, as he promised to work with Moïse’s allies and opponents alike.

“Everything is under control,” he said.