‘I stomped at him like a pigeon’: Have-a-go hero, 21, who stopped a charity box thief by tripping him up reveals the same thug went on to threaten his mother with a claw hammer while high on Spice

A passer-by who stopped a charity box thief by tripping him up has revealed the same thug then threatened his mother with a claw hammer while high on Spice.

Jerome Denton, 21, was wandering through Hull Paragon train station to get something to eat before starting his shift at St Stephen’s shopping centre.

But he spotted Joshua Starkey, who had just stolen a British Heart Foundation box from a Subway branch, running towards him and stuck out a leg to trip him up.

Later on that day – in an amazing coincidence – Starkey went into a bingo hall in the city and threatened Mr Denton’s mother with a claw hammer. 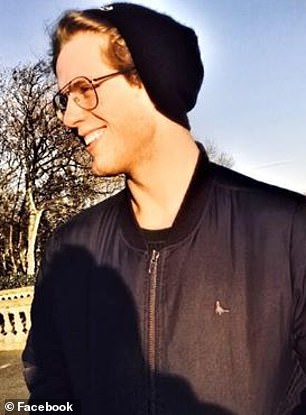 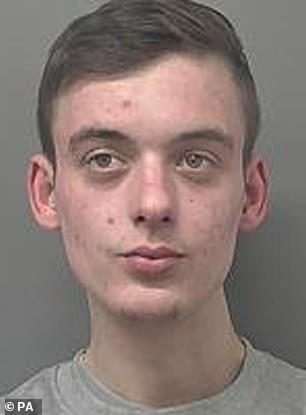 Jerome Denton (left), 21, was wandering through Hull Paragon train station to get something to eat when he spotted spotted Joshua Starkey (right), 23, running towards him

Recalling what happened on March 25, Mr Denton said: ‘I was working at Gravity at the time and I arrived in town 20 minutes before my shift.

‘I thought to kill some time I would go and get a sausage roll or a Subway salad so I was walking through the station and I just saw him running at me.’

Mr Denton said he spotted the charity box and after initially being torn between getting involved and trying to stop him, he tried to stop the thief.

He added: ‘I tripped him over and he went flying and then when he tried to grab the charity box again, I stomped at him like a pigeon and gave him a good chastising.

‘I said: ‘You don’t steal from charity’. I picked up the box and gave it back to the Subway lady who ran after him.

‘I then felt super awkward going into Subway so I went to Greggs and bought a sausage roll, but I could barely grab my change because I had an adrenaline rush.’

After leaving the shop and tucking into his well-earned grub, Mr Denton was met with a round of applause with onlookers appreciating his bravery.

‘As I left people were clapping and shaking my hand. It felt like Chariots of Fire should have been playing.’ 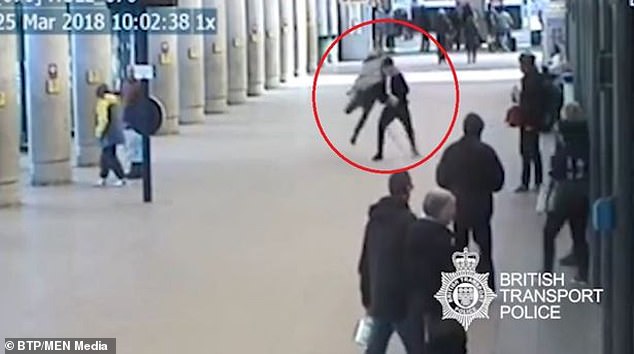 Mr Denton spotted Joshua Starkey, who had just stolen a British Heart Foundation box from a Subway branch, running towards him and stuck out a leg to trip him up

Later, Starkey, who was under the influence of Spice and heroin, threatened Mr Denton’s mother with a claw hammer in a bingo hall.

He said: ‘Later that night my mother came home telling me someone threatened her and her workmate with a hammer.

‘I joked around saying, ‘imagine if it was the same guy’ and it turns out it was. So I saved a charity box but also made the man mentally scar my mother.’

Starkey, of Hull, was jailed for five years last month before being given an additional 16 weeks behind bars for attempting to steal the charity box. 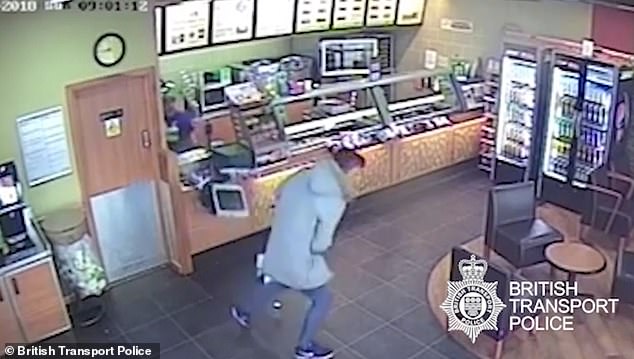 A close friend of the 23-year-old had defended him by labelling him as ‘amazing’ and the ‘nicest kid you could ever meet’.

She said he only committed the crimes because he was on drugs which he had taken as a way to cope with his mental health problems.

However, Mr Denton had no sympathy for the armed robber who was labelled as ‘despicable’ and ‘disgraceful’ by judges and the police.

He said: ‘I don’t know what his circumstances are. I don’t know if he needs money for drugs or money to just be able to afford to live but apparently he’s stolen charity boxes multiple times before. 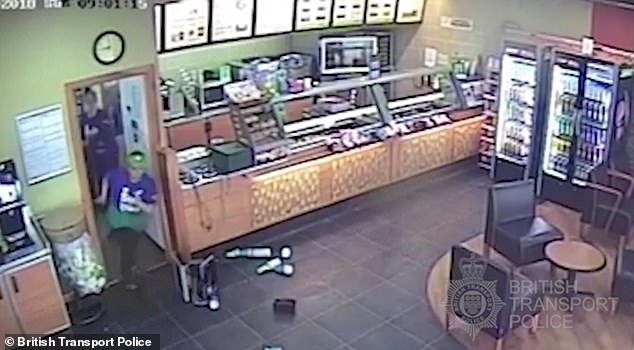 ‘Plus he had two guys working with him, which means it was pre-planned or pre-meditated.

‘I don’t really care what gets done to him, he’s irrelevant to my life, I just love how he has a limp on the video of him robbing Showcase and it’s because of me.’

Since British Transport Police uploaded a video of Mr Denton’s heroics, he has been praised as a ‘hero,’ a ‘legend’ and ‘brave’.

However Mr Denton’, who is a student in Blackpool, insisted he would do it again – if only so he could have his own ‘montage’ of him ‘tripping people over’. 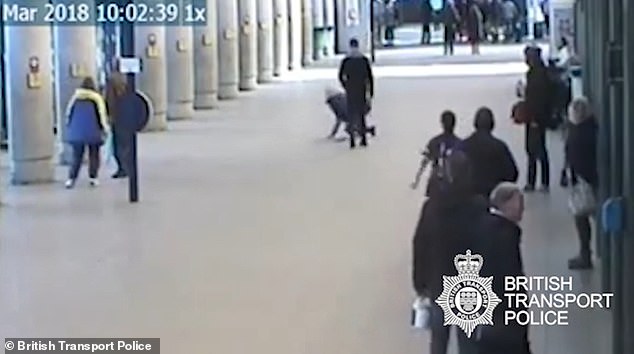 ‘I mean sure, a key to the city and a medal like what I’ve seen in the comments would be nice, but to be honest the only thing I expected was a free Subway.

‘Would I do it again? Yes, because a montage of me tripping people over would be fun to watch.’

Heartbreaking moment rescue dog is too frightened to step inside house