Heathrow charges passengers an extra £8.90 a flight to keep check-in desks, baggage system and lights going after losing £1.5billion in nine months due to Covid

Heathrow is charging passengers an extra £8.90 a flight to keep its check-in desks, baggage system and lights going after losing £1.5billion in nine months due to Covid.

These costs are normally covered by annual fees agreed with airlines, but passenger numbers have plummeted over the last year, culminating in the airport losing its status as Europe’s busiest last Autumn.

In July and September, flights were down by more than 84 per cent compared with the same period in 2019.

Airport bosses insist the charge would be removed once passenger numbers are back on the rise, but said it was needed this year to ‘achieve full cost recovery’, according to the Times.

Currently Britons are not allowed to leave the country unless they have a legally permitted reason.

Holiday giant Jet2 yesterday announced it had cancelled all trips and flights until April 14 due to travel restrictions and growing uncertainty over when lockdown will end.

The company said it was handing out full refunds for holidaymakers who have had their travel plans scrapped.

It came after Matt Hancock unveiled a brutal crackdown on those breaking travel restrictions, insisting those who lie about whether they have been to mutant coronavirus hotspots face up to 10 years in prison. 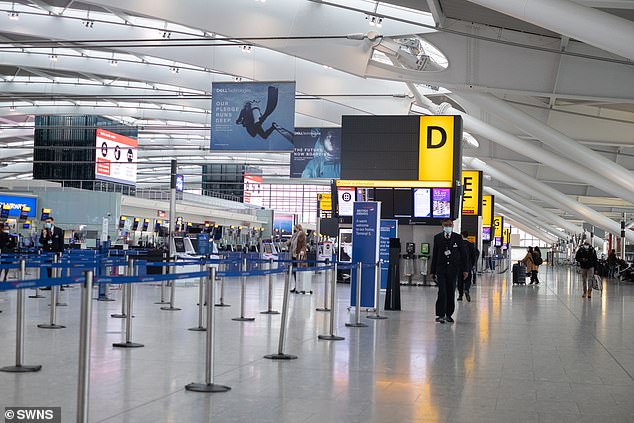 How will the new border rules work?

Matt Hancock has announced details of the tougher border measures to MPs.

Mr Hancock said that arrivals who lie on their passenger locator forms about visiting ‘hot spot’ countries, in order to avoid hotel quarantine, face up to a decade in prison.

It affects British arrivals from 33 countries deemed high risk of new variants. Nationals of those countries will be refused entry to the UK and most direct flights have already been banned.

The countries include all of South America, large parts of Africa – including South Africa – and the United Arab Emirates.

Arrivals from Red List nations will have to quarantine at a Government-designated hotel for 10 days.

It will cost the travellers £1,750 each, although the Government is paying the upfront cost and will bill them afterwards.

Attempts to break out of the quarantine before the 10 days are up could result in a fine of up to £10,000.

They are not eligible for the five-day ‘test and release’  scheme.

None of the 16 hotels involved in Number 10’s quarantine plan have been named for ‘commercial reasons’.

Red List arrivals will be required to test negative for coronavirus 72 hours before departure, using a kit that meets UK government standards.

They will be tested again on day two and day eight of quarantine, with costs included in the wider charge of the hotel stay.

The same requirement for a negative test result 72 hours before departure applies.

Once in the UK, they must isolate for 10 days at home or in private accommodation, with the authorities able to check that they are obeying the rules.

Tests will be required on day two and day eight of isolation, and must be booked through a government portal in advance of travel. The portal will be launched on Thursday.

The costs are not yet known but PCR tests typically cost around £120 a time.

The test and release scheme – which allows non-‘red list travellers’ to leave isolation if they test negative after five days is staying in place. Many essential business travellers are likely to take this option.

However, Mr Hancock suggested even though they will not be subject to quarantine after the five-day test, they will still be required to have tests on day two and days eight. That means they could be screened four times in total.

The Health Secretary said he made ‘no apologies’ for incredibly harsh measures, warning that protecting the UK from variant strains that can potentially evade vaccines is ‘mission critical’ – and hinting they might need to be in place until the Autumn.

He revealed the government is creating a new criminal offence of hiding from the authorities that you have visited one of the countries on the UK’s ‘red list’.

The draconian step came as he confirmed that from Monday all arrivals will have to take three gold-standard PCR coronavirus tests before being allowed to freely move around the UK.

One has to be completed abroad before departure and two during their 10-day isolation period in the UK. Those who fail to get the checks could be hit with thousands of pounds in fines.

Mr Hancock also declared that 4,600 rooms have now been secured by the government from 16 hotels so the ‘quarantine hotel’ system can get up and running as planned on Monday, although the Department of Health refused to name them.

All incomers from ‘red list’ countries must stay in the rooms for 10 days, costing £1,750 each – with a supplement for people sharing rooms – including food and drink and their testing bill.

Arrivals from dozens of high-risk countries on the ‘red list’ will have to test negative 72 hours before travelling, and then be screened again twice, on day two and day eight.

Failure to stick to the hotel quarantine will be punishable with a fine of up to £10,000, Mr Hancock said.

Meanwhile, all other travellers will also have to show a negative result before coming to the UK, and then face two more tests while isolating at home or in other private accommodation. The government has not said how much that will cost although typically it is around £120 per test.

The existing ‘test and release’ scheme will stay in place so people can escape restrictions five days after arrival – but they will still have to be tested on day two and day eight regardless.

Mr Hancock said failure to get the screening – which must be booked in advance through a government portal – will be punishable with a £1,000 fine on the first occasion, and £2,000 on the second.

And he said people who lie about whether they have been to ‘red list’ countries could be hit with a jail sentence of up to 10 years under a new law.

The maximum punishment puts the offence in a category with some of the most serious, alongside things such as carrying a firearm with intent. Sentences for rape can be shorter than 10 years, although the maximum for that level of crime is life.

The tests required are the PCR variety rather than the quicker and cheaper lateral flow.

The announcement was met with concern from business chiefs, who called for extra help for the aviation sector.

The Confederation of British Industry’s chief UK policy director Matthew Fell said: ‘Business understands the priority is to protect the health of the population, and supports measures to reduce infections and hasten the return to a normal way of life.

‘Yet these new quarantine rules and testing requirements are a further reminder of just how challenging the situation is for the international travel sector right now. 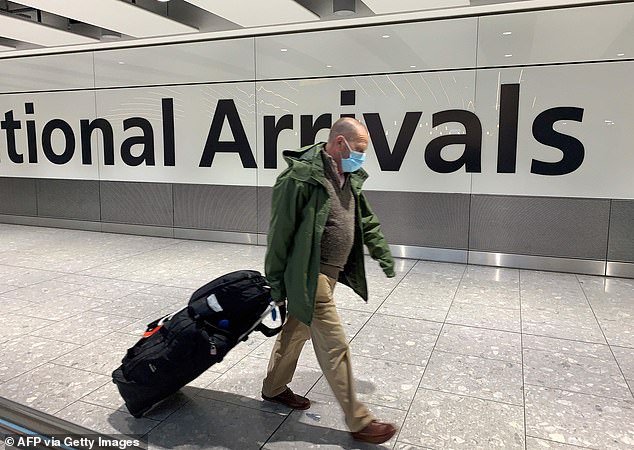 Currently Britons are not allowed to leave the country unless they have a legally permitted reason. Pictured: a passenger arriving at Heathrow yesterday 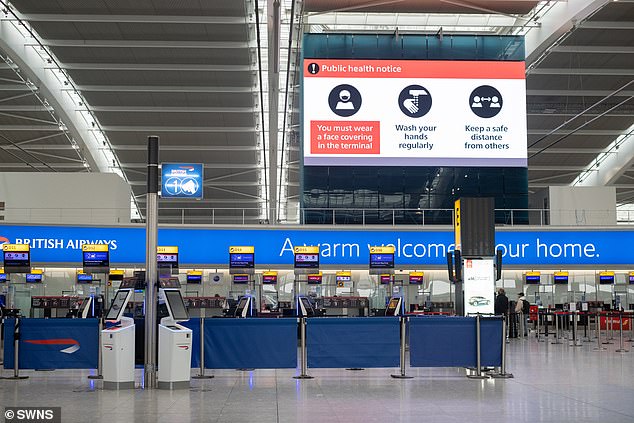 From Monday, UK residents returning from 33 countries will have to isolate for 10 days in hotels.

Now, a YouGov poll has revealed that most Britons think they’d cope well with the quarantine.

‘Further, immediate support is now essential to protect companies and jobs in the aviation sector and its supply chains in the difficult months ahead. The Government should also be clear on a road map to relaxing restrictions when health data permits.

‘The UK’s world-class aviation sector – which underpins so much of our economic activity – must be supported so that it can play its full part in the country’s recovery.’

Paul Charles, CEO of travel consultants The PC Agency, said: ‘Mass traveller testing alone is to be welcomed as it enables Government to stay one step ahead of possible new variants, but adding several layers of complexity to travel will stall any economic recovery.

‘The Government needs to signal that it is looking to loosen border restrictions again from April, when there will be much less pressure on the NHS and infection/mortality rates will be lower.

‘What is the exit route out of this? Travel cannot work on the short-term whim of Government.’

He added: ‘When infection and mortality rates are much lower and the NHS is not under pressure due to vaccines taking effect, then there is no reason for such measures to be in place.

‘So, I would still expect travel to short-haul Europe to be likely from 1st May onwards and that’s when consumers should be booking for.

‘Some countries will still no doubt insist on negative test proof but travel should very much open up further. This will enable people to visit family again and travel on business, as well as for holidays.’

Mr Charles said the government needed to signal that restrictions will be diluted from the start of April, or the travel sector could go over a ‘cliff-edge’ with ‘hundreds of thousands of job losses and business failures’.

Heathrow chief executive John Holland-Kaye insisted in October when the figures were revealed that ‘Britain is falling behind’ because ‘we’ve been too slow to embrace passenger testing’ for Covid-19.

By comparison, coronavirus testing regimes had been implemented at all three ‘continental rivals’ – Paris Charles de Gaulle, Amsterdam Schiphol and Frankfurt – the airport said in a statement.

Coronavirus prepper ‘mistakenly killed boy, 13, with gun he got to ride out pandemic’ – The Sun

Tragic update on missing children as boy, 2, is found wandering on train track and his brother, 1, is found dead | The Sun