New York: US federal prosecutors have filed motions saying that Honduran President Juan Orlando Hernández took bribes from drug traffickers and had the country's armed forces protect a cocaine laboratory and shipments to the United States.

The documents quote Hernández as saying he wanted to “shove the drugs right up the noses of the gringos' by flooding the United States with cocaine”. 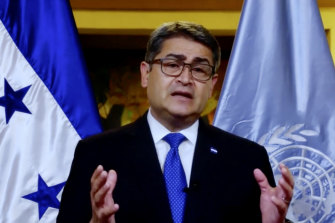 The motions filed on Friday with the US Southern District of New York do not specifically name the president, referring to him as “CC-4,” or co-conspirator No. 4, but clearly identify him by naming his brother and his own post as president.

The president, who has not been charged, has repeatedly denied any connection to traffickers despite the 2019 conviction of one of his brothers, Juan Antonio Hernandez. During that trial, the president was accused of accepting more than $US1 million ($1.29 million) from Mexican drug trafficker Joaquín “El Chapo” Guzmán — an accusation repeated in the new motions.

He has said that traffickers are falsely accusing him to seek vengeance for clamping down on them.

Honduras’ ambassador to the United States, Luis Fernando Suazo, on Saturday rejected the new filings, calling the prosecutors' contentions “baseless” and reiterating the president's position that they are based solely on statements from self-confessed drug traffickers. 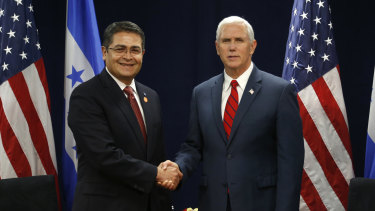 The motions seek pretrial approval to admit evidence in the case of Geovanny Fuentes Ramírez, who was arrested in Miami in March. And they expand upon allegations filed shortly after the arrest accusing Hernandez of taking bribes in exchange for protection from law enforcement.

Fuentes Ramirez is accused of conspiring to smuggle cocaine into the United States and the motions filed on Friday accuse him of producing “hundreds of kilograms a month” of cocaine and of having several people killed to protect his illicit business.

“By late 2013, the defendant partnered directly with CC-4 and high-ranking officials in the Honduran military. At this time, CC-4 was pursuing election as the President of Honduras as a member of the Partido Nacional de Honduras (the “National Party”),” the motion said.

It added that a witness “would testify that that they and other drug-traffickers were paying massive bribes to CC-4 in exchange for protection from law enforcement and extradition to the United States;” and that the president-to-be “accepted approximately $US1 million in drug trafficking proceeds that was provided to his brother by the former leader of the Sinaloa Cartel, Joaquín Guzmán Loera."

Prosecutors say he had agreed to work through the president's now-convicted brother.

Hernandez, who had been president of congress before being elected president in 2013, was reelected in 2017 to a term that ends in January 2022. He has co-operated with the Trump administration and its efforts to stem migration from his nation and others in Central America.

During a January 2020 visit to Honduras, acting US Department of Homeland Security Secretary Chad Wolf said, “Honduras is a valued and proven partner to the United States in managing migration and promoting security and prosperity in Central America.”

Girl, 16, who was the first person to rush to help Skripals