Mink are beaten, stamped on, and left to die of horrifying open wounds in footage exposing the cruel reality of a fur farm in Latvia as campaigners bid to ban exports to Britain

Horrifying footage has exposed the grim reality of life for mink on a a fur farm in Latvia, with animals beaten, stamped on, and left to die of gruesome injuries.

Animal rights activists captured the footage early in 2020 during breeding season at the farm – Latvia’s largest – when select male and female mink are forced together in the hopes they will produce offspring.

But the process often ends with females being mauled to death by their partners, or else left with infections that condemn them to a slow and painful end.

Those that do fall pregnant and give birth are separated for their young, which live for just eight months before being gassed to death – provided they do not die of disease or get beaten to death by workers in the meantime.

The corpses are then skinned with the fur sold into the fashion industry. The UK is one of a number of countries that imports fur from Latvia each year.

The investigation was published as the UK consults on importing fur from Europe, which animal rights campaigners hope will end with the trade being banned. 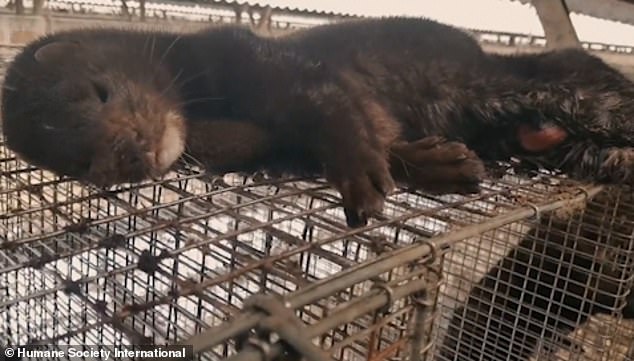 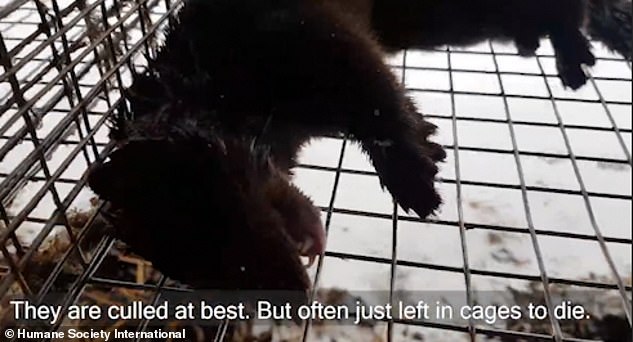 The footage was captured by an undercover investigator for Humane Society International, which shared it exclusively with Mail Online.

Claire Bass, executive director of Humane Society International, said: ‘For as long as the UK provides a market for this cruel fur, these animals will continue to suffer.

‘So we hope that this footage sends a clear message to Prime Minister Johnson that Britain must not trade in such obscene cruelty, and must close our borders to fur.’

HSI’s investigation was carried out during the early months of 2020, with an activist sent to work on a farm in Latvia while secretly recording the conditions there.

The farm is the country’s largest, with up to 97,000 mink kept there between the end of breeding season in May and the start of the killing season in November.

The man – named only as Gatis – was sent there to work during breeding season, which typically begins in February.

In the video, Gatis documents the grim conditions the mink are kept in – confined to tiny wire cages where they pace due to stress.

During the breeding process, select males and females are thrown together into cages in the hopes they will mate.

Some females are mauled during the process, with injuries including grisly head and stomach wounds that leave their brains and internal organs exposed.

While workers kill some of the wounded mink, many are simply left to die in pain.

Others end up with infections due to being repeatedly bred, with those animals often suffering drawn-out deaths with no vet on site to treat them.

Following the breeding process, most of the males are immediately gassed and skinned, with only a select few kept for breeding the following year.

Females generally give birth between April and May, with their young taken away as soon as they are weaned – around six to eight weeks later.

The young are then allowed to grow for eight months until the killing season, which generally takes place in November and December.

Most animals on the farm will generally be killed during this period, including any mink mothers that farmers do not plan to keep for breeding the next year.

As well as grim conditions for the animals, Gatis said staff are badly treated – with many suffering painful bite wounds from the mink even while in protective clothing.

During a Covid outbreak at the farm in April last year, Gatis said staff weren’t given proper PPE – potentially exposing them to dangerous mutated forms of the virus, which can pass into mink and then back into humans. 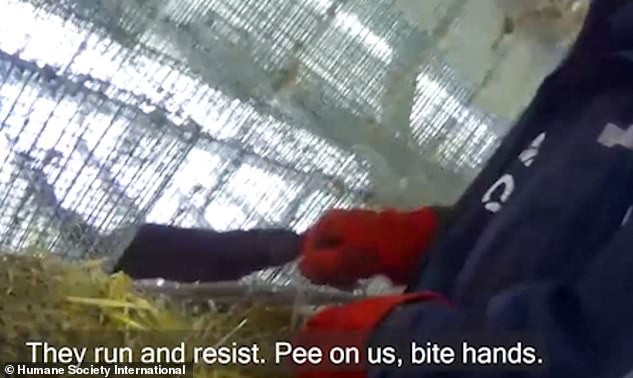 A worker is bitten on the glove by a mink, which often cause injuries to the farm staff who seldom end up working there for more than a few months 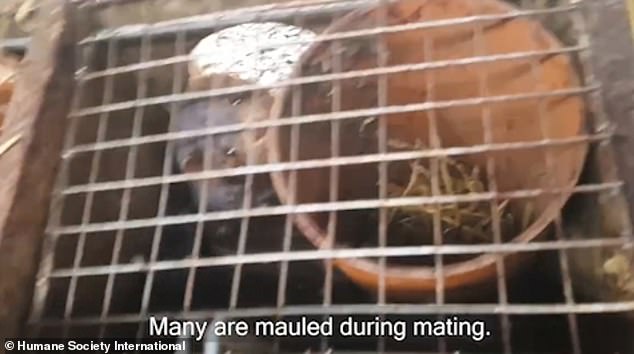 The Covid outbreak was detected after mink at the farm tested positive, with a government report saying the virus was likely introduced by an infected worker.

It is not possible to say how many staff or mink were infected at the farm due to limited testing that was in place.

Millions of mink were culled in Denmark last year after it emerged the disease was spreading from the animals to humans, amid fears it could produce a form of the virus that is immune to the current generation of vaccines.

In total, Covid outbreaks have been reported at 407 mink farms in Europe.

Gatis added that staff are routinely exposed to violence at the farm, often become emotionally numbed, and don’t generally work there for more than a few months.

He said: ‘Working at the fur farm was the most degrading experience of my life but I want people to see the awful reality that these animals endure.

‘It’s a life of pain, injury, sickness, filth and death.

‘As the UK government is right now considering whether or not to ban the import and sale of fur from countries like Latvia, I want to show him the animal suffering the UK is currently bankrolling.

‘I would love Latvia to ban fur farming, but countries that import this fur are also responsible for the animal cruelty, so a UK ban would make a huge difference.’

Fur farming has been banned across the UK since 2003, and has been banned and/or is in the process of being phased-out in Austria, Belgium, Bosnia-Herzegovina, Czech Republic, Croatia, Estonia, Macedonia, the Netherlands, Norway, Luxembourg, Serbia, Slovakia and Slovenia.

Earlier this month, the parliament in Estonia voted in favour of a fur farming ban.

Late last year, the government in Hungary declared a ban on the farming of animals for fur, including mink and foxes.

In France a ban on mink fur farming is currently progressing through Parliament, and the Irish government has made a commitment to bring forward legislation in 2021.

Some 2,000 travelers still stranded in Bangkok after flights disrupted