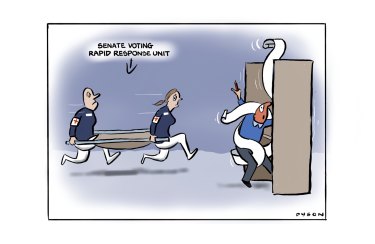 Waleed Aly (Comment, 20/5) precisely captures the dilemma of house affordability. For years we have spoken of the “housing market” when this term came to be used to describe what’s effectively shelter the demise was inevitable. Housing shouldn’t be a market, it should be an affordable commodity.
Angus McLeod, Cremorne

There must be alternative investment options
Waleed Aly gets it right: housing is treated as wealth accumulation, an investment strategy, and not as basic shelter. It is the only option for small investors that offers a return in both capital and income (rent paid or as rent saved). So one solution to the housing crisis is to develop alternative investment options, and the re-modelling of industry, energy, and agriculture to address climate change effects provides the perfect opportunity.
Tom Danby, Coburg North

Think of future generations
Waleed Aly outlines the real problem about the housing market. I am so pleased that as a retiree owning my own house it is of no direct concern to me. However I feel so sorry for the upcoming generations. And to put my money where my mouth is, I voted for Labor last election knowing I would lose my franking credits but hoping that this policy along with the winding back of negative gearing would benefit people like my grandchildren.
Clive Millsum, Cranbourne

Three-word jingles don’t cut it
“It’s your money” trumpets the prime minister while encouraging first-home buyers to raid their super fund to help them compete against those with deeper pockets and the financial assistance of negative gearing. As usual the prime minister tells only half the story. Super is your money but it is wrapped in its own complex tax advantages to encourage/force people to contribute greater amounts than the legislated employer amounts and not to access it before retirement. The well-off will continue to pump more money into super investments while those who can least afford it, in desperation, will draw down this vital nest egg. Once again this government offers illusory support to those doing it the hardest, spruiked by a three-word marketing jingle.
Peter Thomson, Brunswick

PM’s plan should be applauded
As a woman, I would be terrified of reaching old age without my own home. It is possible to live on the pension if not needing to pay rent, and shops are within easy reach. So Scott Morrison’s plan to allow a portion of superannuation to be used to buy a home early in life while still earning, is to be applauded. I would not want my home to be part-owned by the government, which is Labor’s alternative, because they might want to take it back. All women need their own home.
Jill Johnson, Malvern

Vote 1, integrity …
Integrity most certainly needs to be a prime consideration for voters at this federal election (Editorial, 20/5).
Without it, promised political policies are prone to contemptuous and cynical manipulation into something more insidious, weak or conveniently dumped. For the incumbents, past performance on integrity is the best indicator of future performance, election campaigning will not alter the leopard spots of integrity while they have been in power.
For the challengers, the integrity of their policy ideas and the techniques and behaviours used to persuade voters will be a predictor of their performance if elected. Please vote with integrity in mind to help break the trending decline in trust of our precious democracy.
Paul Miller,
Box Hill South

… it is the cornerstone
If we had integrity in parliament, we wouldn’t have over-sized scare campaigns that distort truth and adversely influence voters. Integrity is the cornerstone of everything a government does.
Elaine O’Shannessy, Buxton

Face the big issues
I applaud The Age’s editorial comments calling for a change of government. It is extremely disappointing to see after such a long campaign, that the major parties have reduced the national debate to just a small range of fiscal and economic issues as if these issues (important as they always are) are the most important issues in this election.
What has become of our national imagination and political ambition that we do not grapple with the really big existential issues facing Australia together in a healthy bipartisan approach – protecting our democracy with a proper integrity commission and a ban on political donations; protecting our climate from galloping warming by fast-tracking to net zero emissions; protecting nature, species and habitat from failed environmental laws.
These are the big issues that transcend politics and which we desperately need to resolve together if we are to create a better future for our children and grandchildren. After nearly 10 years it is clear that the Coalition government cannot and will never address these effectively. This is now the election that is beyond politics.
Mark Cummings,
Brunswick

Just leave it there
People who support the release of money from the compulsory investment scheme called superannuation don’t understand that the whole purpose is to put money in early and leave it there untouched for decades so that compound interest can work its magic, resulting in an exponential increase in the value of the investment in the later period to a value sufficient to support a comfortable retirement. Putting withdrawn money back into the fund later on will only result in a much lower, probably inadequate, final sum.
Don Jordan,
Mt Waverley

Housing priorities
It is time the political parties acknowledge that there is a housing crisis and do something about it. And not just for young people seeking to enter the housing market, or families suffering ″⁣mortgage stress″⁣, but for the third of Australians who rent. Even more, for those Australians on low incomes seeking affordable rentals, which are almost non-existent.
Public, or social housing, has been scandalously neglected. The Andrews government in Victoria has made a start to remedy this situation. The Labor Party at a federal level has also put forward some useful initiatives. But it is not enough.
We need a mobilisation today something akin to what happened in Britain in the 1950s. Winston Churchill, the Conservative leader, pledged to build 300,000 houses a year. By 1953, the number was reached and was maintained for the next five years.
Today we need governments to place a similar priority on housing, on what is after all a basic human right.
Andrew Suttie,
North Melbourne

Us and them and … me
I’m 61 and it has been my experience that the right always ask ″⁣what about me″⁣ and the left ask ″⁣what about them″⁣. That was the reason I got into teaching and stayed for 37 years. How better could society be, if I made a difference to … them.
And that is the way I will be voting today.
Frank Flynn, Cape Paterson

Number tinkering
So 4000 new jobs in April have the Liberals rejoicing. Seeing that one-hour employment counts as fully employed, could Josh Frydenberg break down the truly fully employed figures, people that work 35 hours a week. Those numbers would be interesting, a liveable wage, probably not. Stop the fiddling with numbers and deal with the monetary issues the working poor are enduring.
Ron Reynolds,
Templestowe

Climate summit needed
The closure of Australia’s coal-fired power stations after the election may satisfy the Greens, the ″⁣teal″⁣ independents and the Labor Party. It will possibly reduce world greenhouse gas emissions by less than 1 per cent, create major employment issues in mining and associated industries and lead to increased power prices. This will have no adverse impact upon the millionaire and billionaire climate change warriors, however, it will have an adverse impact upon those least likely to be able to afford it.
Why not have a “genuine″⁣ climate summit with all sides taking part, rather than the chest beating and grandstanding that is occurring at the moment?
Des Grogan, Sorrento

Just appalling
What an appalling federal election campaign this has been. Worse even than 2019. I cannot recall issues of substance not being pursued in the way they would have been previously, nor ministers not facing the scrutiny they would have been subjected to previously. Young ill-equipped reporters have deemed ″⁣gotcha″⁣ moments as more apposite to which party should form government. Concocting controversy where none exists. ″⁣Sorry, but this is embarrassing for my profession,″⁣ the ABC’s Laura Tingle observed.
Neil Hudson, East Melbourne

Ballot befuddlement
Who did you vote for today? This simple question is made far more complex by the full preferential system used to elect the House of Representatives. Growing disillusionment with the major parties means that more voters now give their first preference to a minor party or an independent and put the major parties at the bottom.
However, in most electorates, this tactic fails to achieve its purpose because, after the preferences have been distributed, that vote will end up going to one of the major parties even if the voter has equal contempt for both of them. The requirement to number every box means voters cannot prevent it. It would be more democratic to allow voters to preference only the candidates they choose. If they did not have to preference the major parties at all, they cannot be forced to vote for one of them.
Rod Wise, Surrey Hills

Let hope ring out
After the next three years we must have a government we believe in. We have little patience and trust left in our governments. But hope rings still, yet not eternally.
Kevin Mulvogue, Mount Evelyn

Are we there yet?
Is it over yet, can I came out from under the bed covers, has that man stopped pushing over children or should I wait a few more days? James Lane, Hampton East

Vote 1, salami
I voted early and brought my own little stick salami along. Really. But it made me think: instead of serving the usual fatty sausage with unknowable contents, on soggy, high-GI white bread, why not combine voting with a public health message and offer a healthier snack to all voters. Ralph Böhmer, St Kilda West

The election
To bulldoze our way to a brighter future, we must vote for a new driver.
Annie Wilson, Inverloch

Is a vote for Scott Morrison really a vote for Jenny, the bulldozer’s social conscience?
David Seal, Balwyn North

As clearly demonstrated from the past nine years of Liberal government more of the same will get you nowhere.
Glenise Michaelson, Montmorency

All major parties are displaying a disappointing lack of vision for the future, confirming the cynical answer to the question, what is the definition of long-term planning? Someone else’s problem.
Peter Heffernan, Balaclava

Scott Morrison’s claim that lower unemployment will stimulate wage growth is hard to accept; it hasn’t during the past year. It’s another case of him talking the talk to avoid the truth.
Adrian Peniston-Bird, Kew

Looking at the increasingly devastating climate events over the past three years, can we delay acting effectively for another three years?
Chris Waters, Ormond

People can have as many properties as they can afford, however they should be limited to claim negatively geared tax relief on a maximum of one.
James Young, Mount Eliza

Ah! The agony and the ecstasy. The ecstasy of no more unedifying political advertisements and statements and the agony of waiting for either three more years of inadequate continuity or three years of possible difference.
Les Aisen, Elsternwick