HURRICANE Dorian has become a "life-threatening" Category 5 storm – as the 160mph monster howls towards the US east coast.

The eye of the storm – now at the highest possible category – is expected to lay waste to the Abaco Islands before barrelling northwards to Florida and Georgia.

A National Hurricane Centre spokesman said: "The eyewall of this catastrophic hurricane is about to hit the Abaco Islands with devastating winds. 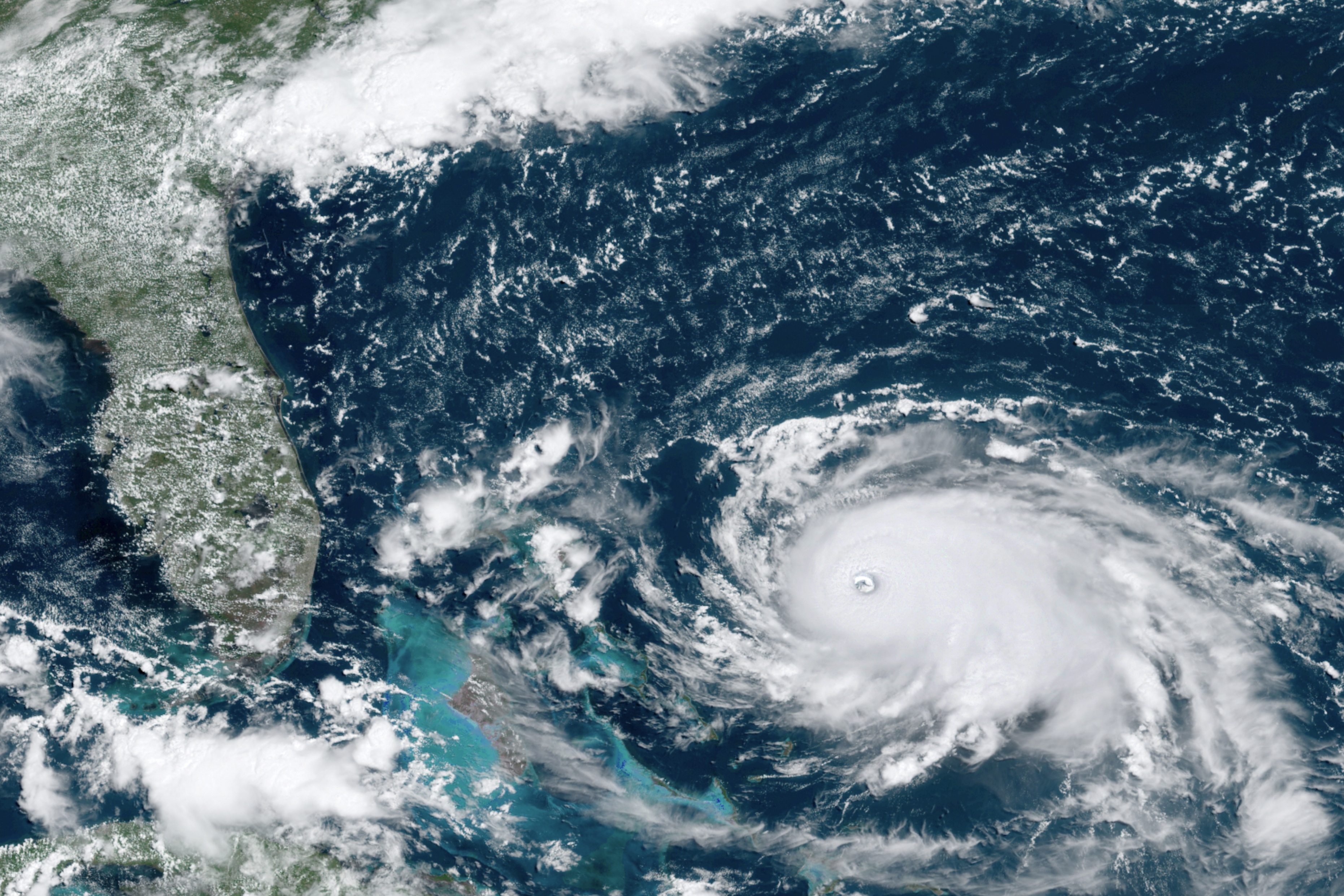 It is expected to make landfall on Florida's eastern coast before spinning through Georgia and South Carolina.

A National Hurricane Centre spokesman said:"The eyewall of this catastrophic hurricane is about to hit the Abaco Islands with devastating winds.

According to tracking site FlightAware.com, 200 flights to, from or within America were cancelled on Saturday.

And as of this morning another 200 planes were grounded for US trips scheduled for Sunday.

The site said: “We expect these numbers to increase in the upcoming days, especially at airports in the region where Dorian is to make landfall.”

Airlines have been issuing waivers to customers for several days for journeys which are heading to destinations in the hurricane’s path, reports CNN.

While travel firms have issued advisories to cities in Florida, Georgia and the Caribbean – more waiver options will be issued for the Carolinas as the massive storm moves northwards up the east coast.

Operations at Orlando International Airport will be suspended at 2am Monday local time, according to an official statement. 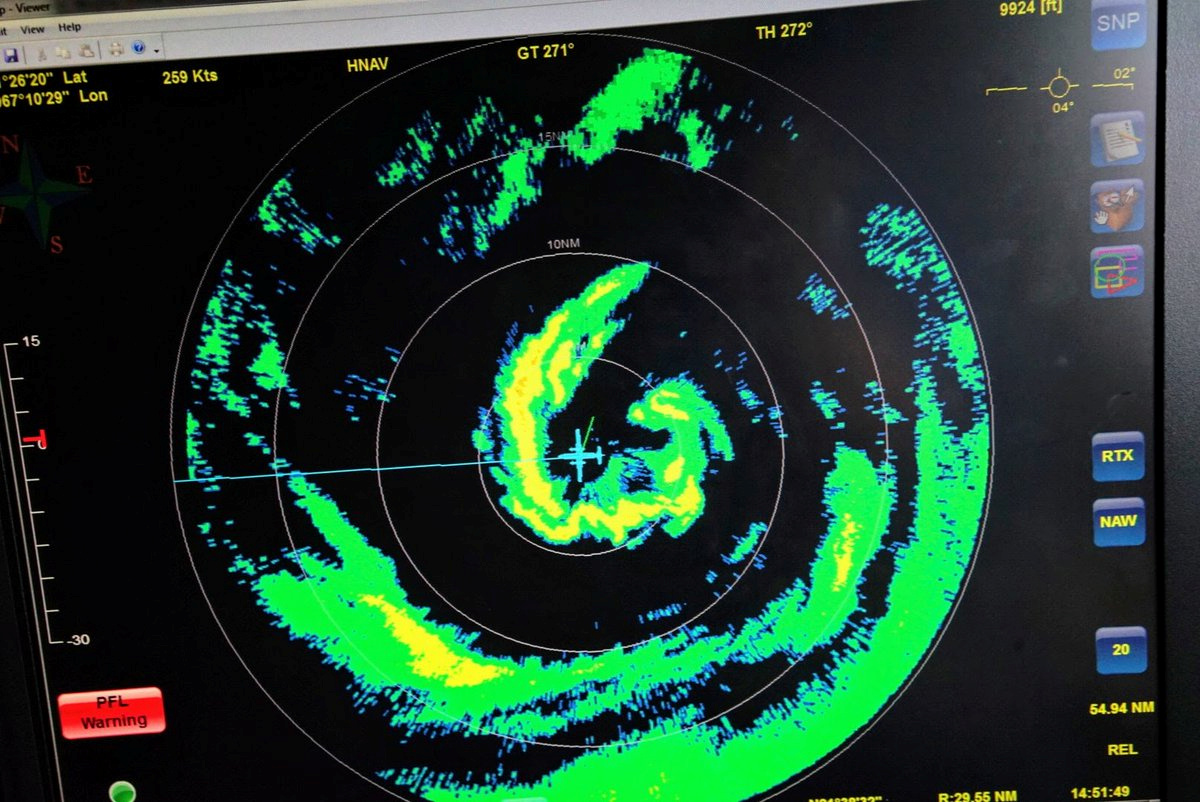 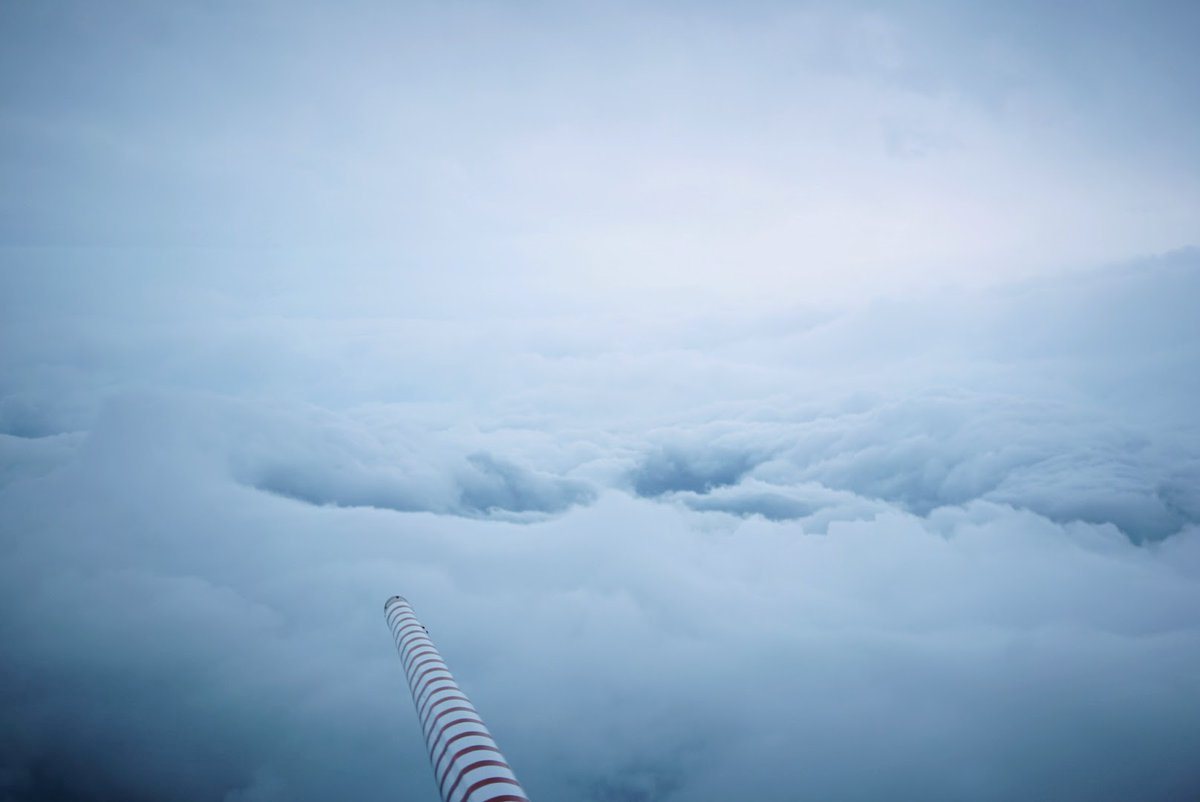 The 150mph storm shifted its path and could graze Florida's coast and continue on to Georgia and North and South Carolina.

And that’s the same route as Category 5 Matthew took three years ago – hugging the southern east coast of the country while still causing billions of dollars of damage.

But Bryan Norcross, a senior hurricane specialist, told Florida Today that Dorian is moving even slower than Matthew which means it could wreak more havoc on the sunshine state.

"Just be ready for that. We’re in a position where you’re talking three, four, five days in advance of what you have to be ready for.

“The threat is real from the Treasure Coast throughout the Florida peninsula. The trend is somewhat favourable — though the danger is still high along the immediate coastline.”

The devastation caused by Dorian could be made worse by exceptionally strong tides called King Tide -which makes coastal areas more vulnerable to flooding.

The super-strength tide happens around the time as a full moon or new moon and this year the King Tides have already flooded neighbourhoods in Miami – and the most recent full moon was yesterday. 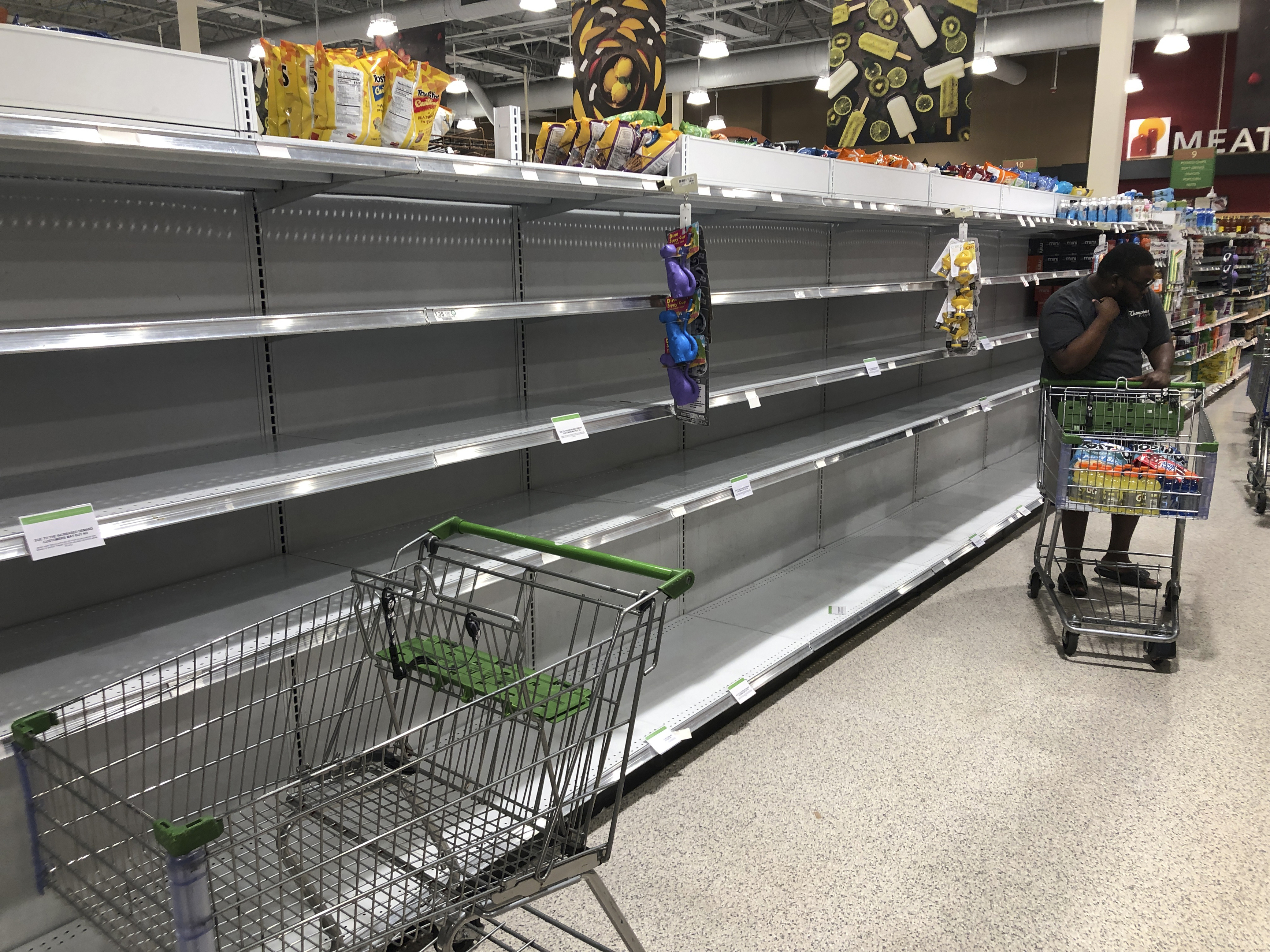 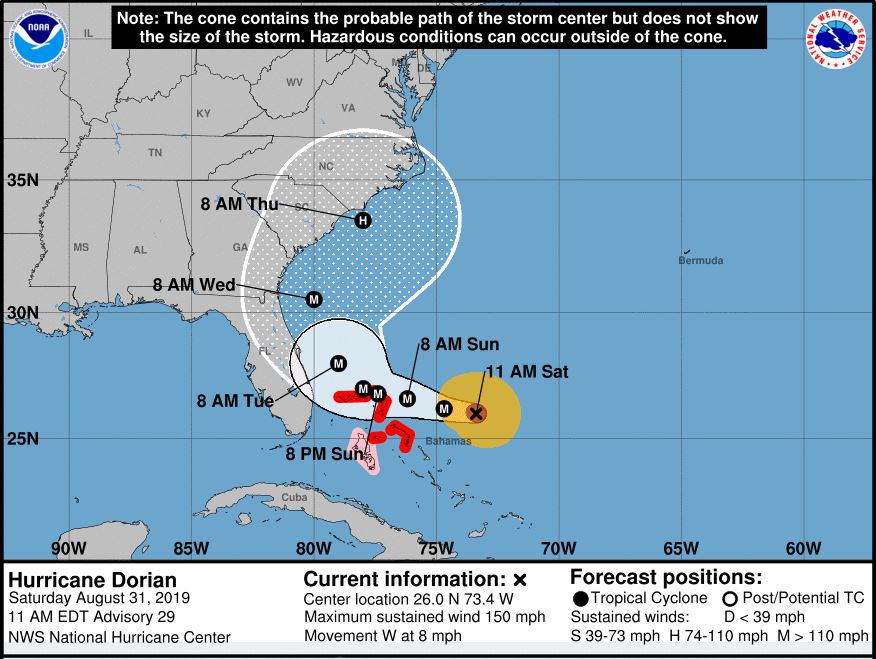 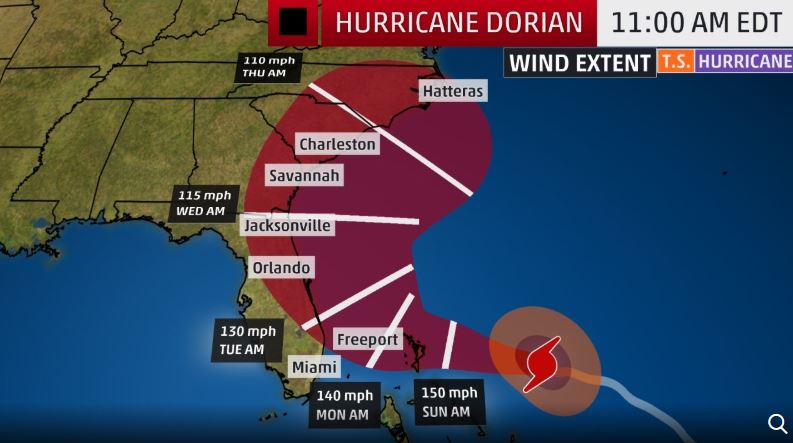 Winds are currently raging over the warm Atlantic waters and is inching towards the northwestern Bahamas, according to the US National Hurricane Center.

The centre says the storm's path is still unpredictable, but Georgia and the Carolinas are now at risk of "strong winds and life-threatening storm surge".

The hurricane has slowed down since Thursday as it was originally expected to make landfall by Sunday.

The NHC still warned Florida residents to say on alert.

They said: "It should be noted that the new forecast track does not preclude Dorian making landfall on the Florida coast, as large portions of the coast remain in the track cone of uncertainty."

Supermarket shelves have been left bare as residents scramble to prepare for the Category 4 storm.

Floridians left supermarket shelves empty after grabbing water, bread and canned goods in the event power and water are cut off.

At a Publix supermarket in Cocoa Beach, Ed Ciecirski of the customer service department said the pharmacy was extra busy with people rushing to fill prescriptions.

Saturday: Dorian is expected to slow its forward motion and will likely begin to impact the northwestern Bahamas with tropical storm-force winds by Saturday night.

Sunday: Dorian's hurricane siege will begin in the northwest Bahamas as it continues to slow down. Tropical storm-force winds may begin to arrive in parts of Florida. Large swells should begin to arrive at the coast from North Carolina to Florida.

Monday: Dorian may still be hammering the northwest Bahamas as it crawls slowly. Bands of rain, strong winds may affect parts of Florida. How strong the winds will be depends on how close the center of Dorian is to the Florida coast, which is uncertain at this time.

Tuesday-Thursday: Dorian is expected to move north, then northeast near the coasts of Florida, Georgia, South Carolina and North Carolina. The exact track is very uncertain, ranging from a track far enough offshore to keep hurricane force winds away from land, to a landfall anywhere in this zone.

Friday-Next Saturday: Dorian is then expected to race off the Northeast Seaboard, but could track close enough to bring rain and some wind to the Virginia Tidewater, Nantucket, Martha's Vineyard and Cape Cod, before it heads toward the Canadian Maritimes by next weekend.

The grocery was rationing bottled water and had run out of dry ice.

Homeowners and businesses rushed to cover their windows with plywood.

Tiffany Miranda of Miami Springs, Florida said: "I feel helpless because the whole coast is threatened.

"What’s the use of going all the way to Georgia if it can land there?"

"You never know with these hurricanes. It could be good, it could be bad. You just have to be prepared."

Jeremy Kichler, a University of Georgia extension agent in Colquitt County who works with local farmers, told local news: "A lot of folks are still recovering from Irma two years ago and Michael last year.

"I don’t know if we can stand another one."

Ron DeSantis, the governor, said the Florida Highway Patrol would begin escorting fuel trucks to help them get past the lines of waiting motorists and replenish gas stations.

The first mandatory evacuation orders were carried out this morning.

Residents in Brevard County have been told to start leaving at 8am on Sunday The Weather Channel reports.

Coastal areas could get 6 to 12 inches (15 to 30cm) of rain, with 18 inches (46cm) in some places, triggering life-threatening flash floods, the hurricane center said.

FEMA official Jeff Byard said Dorian is likely to "create a lot of havoc" for roads, power and other infrastructure.