Several agencies, including the U.S. Marshals Service and the Illinois State Police, continued their search Thursday for four inmates who busted out of a rural jail and are considered armed and dangerous.

Four inmates escaped Wednesday evening from the Fulton County Jail, located in west central Illinois, about 210 miles southwest of Chicago. Residents in nearby Lewistown, Illinois, were warned to remain locked in their homes early Thursday, as authorities canvassed the area, WMAQ-TV reported.

A corrections officer noticed one inmate missing from his cellblock, before officers discovered that three additional inmates had also escaped, the Fulton County Sheriff’s Office said. No other details were provided about how the inmates had made their getaway. 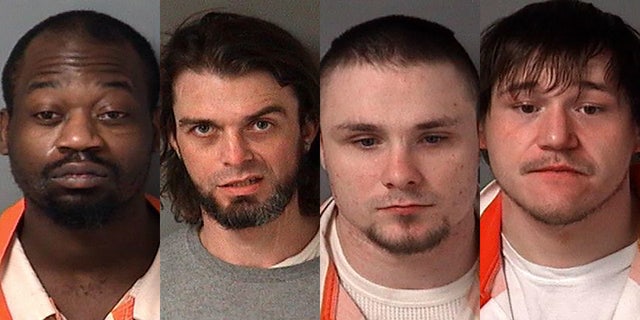 Hart was being held at the jail on a $285,000 bond. He was charged with aggravated domestic battery, home invasion, possession of a stolen debit card, possession of a firearm by a felon, possession of a weapon with no Firearm Owners Identification (FOID) card as required in the state of Illinois, fleeing and eluding a police officer, obstructing justice, and failure to appear pay order DUI.

Villalobos was being held on a $36,500 bond. He was charged with possession of methamphetamine, possession of drug paraphernalia, driving while license revoked, possession of a controlled substance, resisting/ obstructing a peace officer, possession of a weapon by a felon, failure to appear on pay order in relation to a DUI, and possession of contraband in a penal institution.

Six in 10 Brits are ‘dreading’ winter due to Covid restrictions as they prepare for mental health battle, survey reveals