India records 2,000 coronavirus deaths in a DAY as Western countries urge their nationals to flee the country over growing health risks

India’s official coronavirus death toll leapt by more than 2,000 to reach 11,903 on Wednesday as Germany advised its nationals to consider leaving the country because of growing health risks.

Mumbai revised its toll up by 862 to 3,165 because of unspecified accounting ‘discrepancies’ while New Delhi saw a record jump of more than 400 deaths, taking its total to more than 1,800.

It was not immediately clear how many of the deaths had occurred in the past 24 hours and how many were from adjustments over a longer period.

The pandemic has badly hit India’s densely populated major cities and Chennai ordered a new lockdown from Friday because of a surge in cases that will last until the end of June. 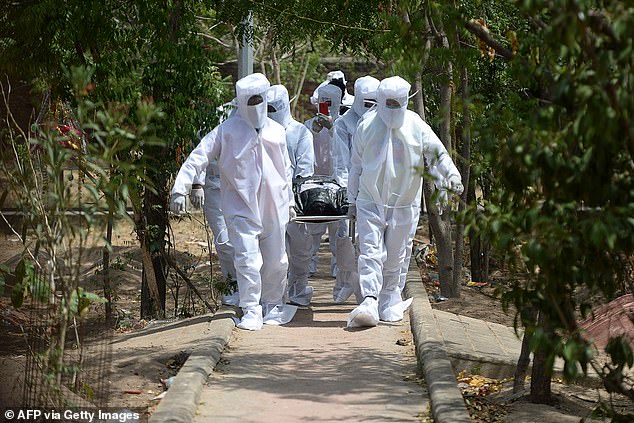 Pictured: People wearing protective gear carry an abandoned body of a victim who died from coronavirus, during a burial at a graveyard in Chennai on June 16, 2020 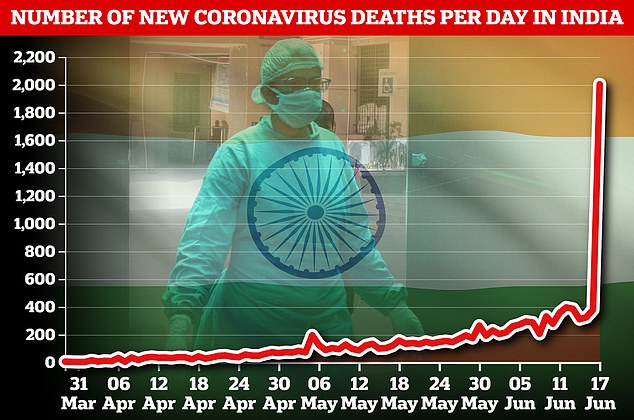 The number of confirmed coronavirus deaths in India leapt by over 2,000 on Wednesday, June 17, taking the country’s total to 11,903 deaths 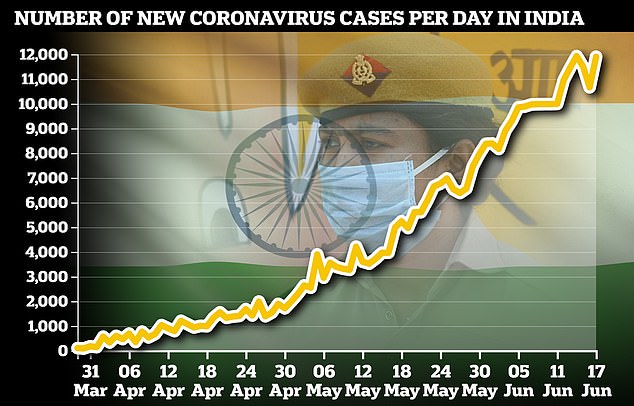 Elsewhere, lockdowns are gradually being eased because of the damage they have caused the economy.

India, the fourth-worst-hit country in the world by cases, has now recorded 354,065 cases, according to official figures.

Experts say the figure is much higher and have called for more widespread testing.

With hospitals in several cities now struggling to keep up with the pandemic, Germany became the first country to warn its nationals about staying in the country.

The German foreign ministry sent a message to nationals in India saying it ‘recommends that you and your families seriously consider whether a temporary return to Germany or another country with an assured health care system makes sense’.

The note said that while the lockdown was being eased ‘unlike in Europe, case numbers are still rising strongly. This increases considerably the risk of infection.’

The embassy said its medical experts believed that people with the coronavirus and other serious medical needs have ‘no or very little chance of being admitted to hospitals. This increases considerably the health risks of a stay in India.’ 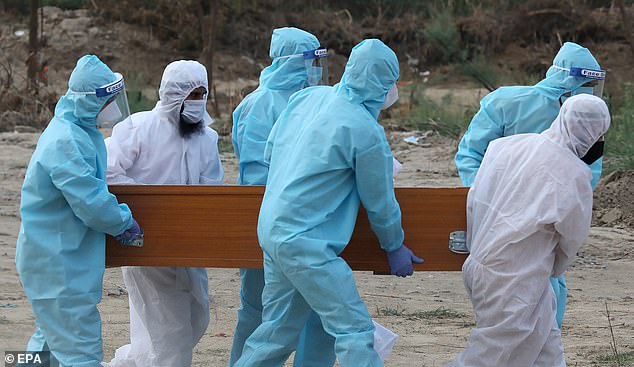 Relatives wearing personal protective equipment caarry coffin into a grave during funeral service of COVID-19 victim at designated area only for coronavirus funerals at the burial site in New Delhi, India, 16 June 2020 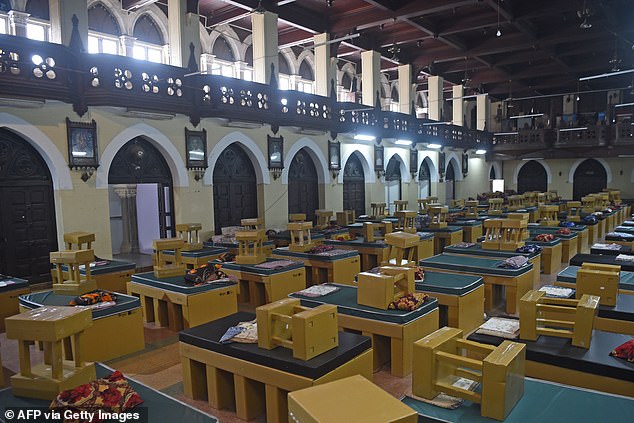 Pictured: A new isolation centre being built for COVID-19 coronavirus symptoms patients, is pictured at St. Xavier’s College in Mumbai on June 17, 2020

Hospitals in Mumbai have been overwhelmed by coronavirus cases, while the government has sent specially adapted railway carriages to Delhi and authorities have taken over hotels and banquet halls to put coronavirus patients.

Some hospitals have even had to store bodies in hospital lobbies.

Critics have been saying the country did too little to prepare and reopened shopping malls and temples too soon.

Some families of people infected with COVID-19 have complained about having to hunt for beds for their relatives after hospitals turned them away. 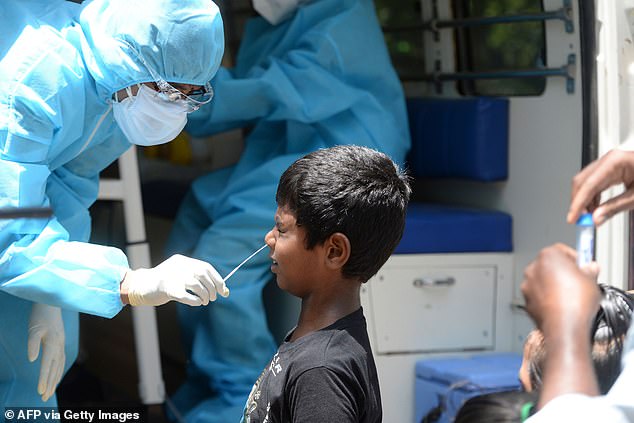 Pictured: A health official collects a swab sample from a young boy to test for COVID-19 at a mobile testing centre after authorities eased restrictions imposed as a preventive measure against the spread of the COVID-19 coronavirus, in Chennai on June 16, 2020 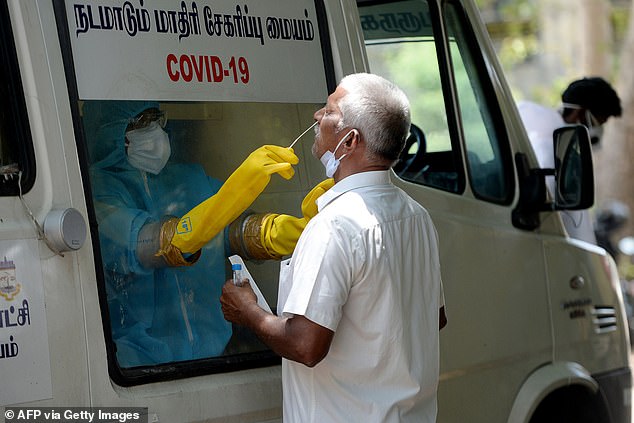 Chennai is set to go back into lockdown from Friday until at least the end of June because of a surge in cases. The government have been criticized for relaxing the lockdown too quickly

Others said patients had been left unattended in corridors of government-run hospitals, while local media reports of dead bodies in a hospital lobby prompted the Supreme Court to order the state administration to get its act together.

‘I don’t think we expected that cases would rise this much,’ said a lawmaker of the Aam Aadmi party that runs the capital, who asked not to be named. ‘We were so over-confident.’

The office of New Delhi’s Chief Minister Arvind Kejriwal and the city’s health authorities did not respond to requests for comment from Reuters.

In a novel way to create beds for coronavirus patients, India has been transforming out-of-action trains into Covid-19 care centres. 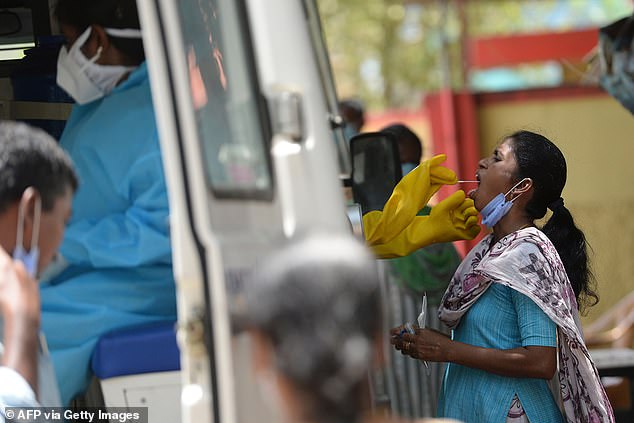 A health official collects a swab sample from a women to test for coronavirus at a mobile testing centre. Experts believe the country’s confirmed cases are much lower than reality and have called on more testing to be done 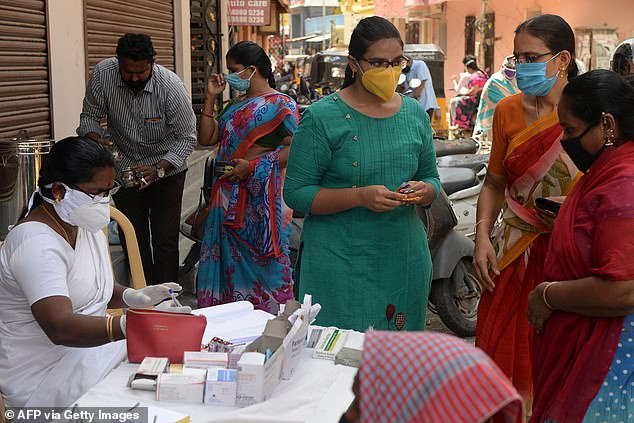 Pictured: Residents wearing masks arrive to get their temperature checked at a mobile clinic after authorities eased restrictions imposed as a preventive measure against the spread of COVID-19, in Chennai on June 16, 2020 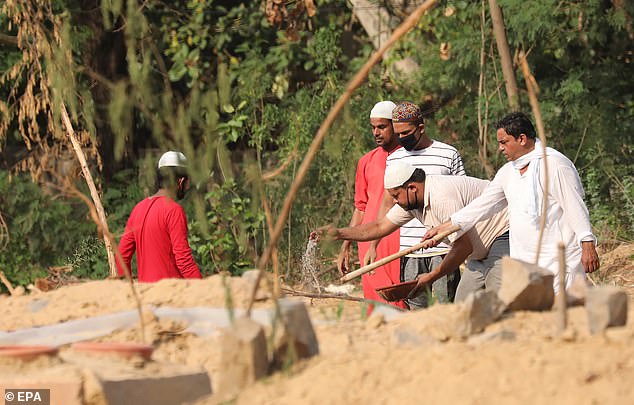 Relatives of a COVID-19 victim perform rituals at a grave after a funeral at a designated area set aside for coronavirus funerals at a burial site in New Delhi, India, 16 June 2020

At the start of the pandemic, Indian Railways pledged to convert as many as 20,000 train carriages into isolation wards, fitted with curtained-off beds, a nurses’ station, doctor’s cabin and space for medical supplies.

As many as 5,231 coaches have so far been converted into Covid-19 care centres, according to Railway Board Chairman Vinod Kumar Yadav.

Cases in the capital are set to surge. The government estimates it will have 550,000 COVID-19 cases by the end of July, around 13 times current numbers, and will require 150,000 beds by then.

On Monday a government mobile app showed that of Delhi’s 9,940 COVID-19 beds, almost 5,500 were occupied. Of the 108 private and public hospitals listed in the app, 25 had no beds available. 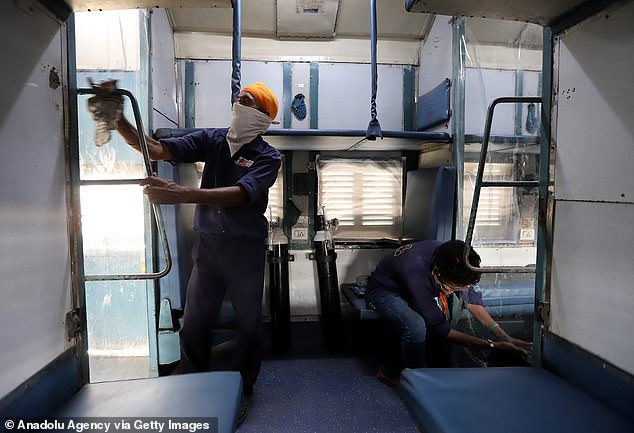 Workers clean the inside of a train coach that is being converted into a Covid-19 tratment facility as hospitals become overwhelmed with the number of cases, New Delhi, June 16 2020 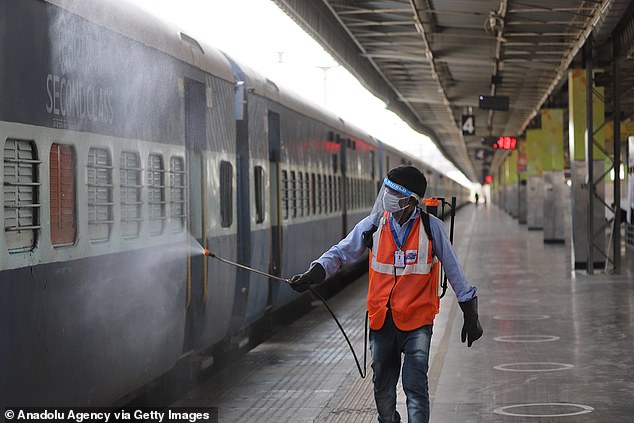 A worker sprays a train down with disinfectant in New Delhi, India on June 16 2020, which is being converted into a Covid-19 isolation facility as hospitals in the city run low on bed

Anant Bhan, an independent researcher of global health and bioethics, said opening temples and mosques was likely to make more people leave their homes and put lives at risk if proper social distancing protocols were not followed.

The reopenings were decided nationally, but the state of Maharashtra where Mumbai is located, for example, kept restrictions in place to contain the outbreak.

‘They (Delhi authorities) probably under-estimated the possibility of a rise of infection and its spread, or the models they used then did not seem to indicate the spread they are seeing now,’ said Bhan.

Following harsh words from the Supreme Court, India’s federal government said it would provide 500 railway coaches to be converted into COVID-19 care centres for the capital.

‘There should be infrastructure, there need to be beds, patients are not being looked after, this is a deplorable state of affairs,’ said Justice M.R. Shah. 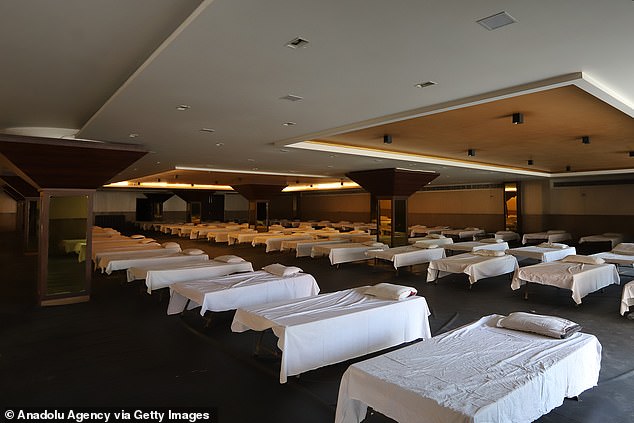 A banquet hall in New Delhi has also been converted into an overflow coronavirus treatment facility as the city’s hospitals run out of intensive care beds available to Covid-19 patients, June 16, 2020 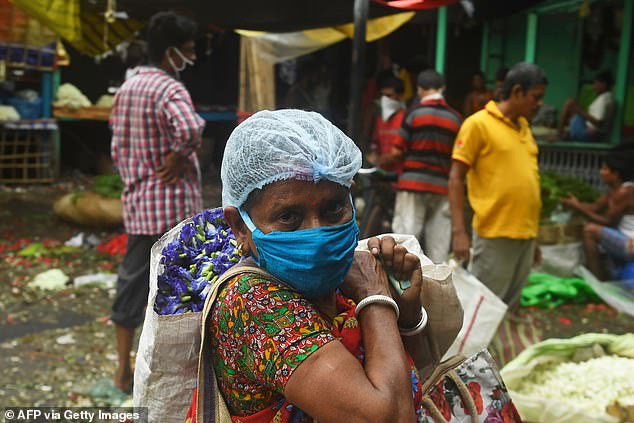 Pictured: A vendor walks through a flower market after the government eased a nationwide lockdown imposed as a preventive measure against the COVID-19 coronavirus, in Kolkata on June 17, 2020

The Delhi government has also been criticised for its contact tracing.

The CEO of India’s NITI Aayog federal think-tank said on Twitter that Delhi was tracing just two people for every COVID-19 positive case, compared with Bengaluru city in the south that was tracking 47 contacts for each patient.

Poor resources are part of the problem.

In a small government office atop a dispensary in the East Delhi district, home to 1.7 million of the capital’s 20 million people, only around 10 staff were coordinating tracing contacts when a Reuters reporter visited on Monday afternoon.

As information about 200 new coronavirus cases trickled in, an official complained that the contact tracing teams were already stretched.

‘How will we deal with it when there are 400 cases?’ the official said. ‘We will need help.’ 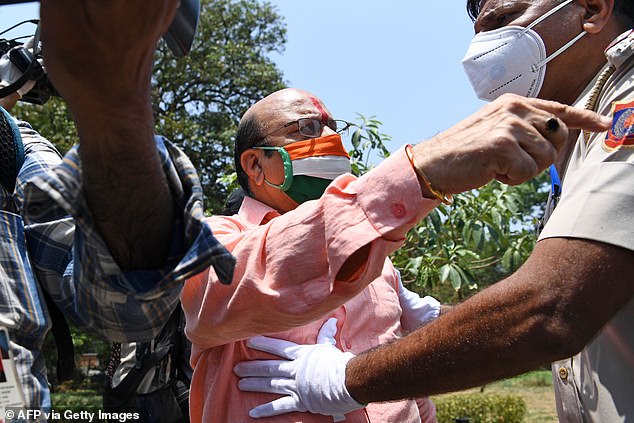 Pictured: A police personnel detains a member of Martyrs Welfare Foundation, during an anti-China protest outside the Chinese embassy in New Delhi on June 17, 2020

Meanwhile, Indians are demanding revenge on China after soldiers of the nuclear-armed nations brawled with nail-studded clubs leaving up to 70 dead at the disputed Himalayan border.

India’s government was silent today on the fallout from clashes with China’s People’s Liberation Army that the Indian army said claimed 20 soldiers’ lives on Monday night.

China reported 43 casualties without specifying how many PLA men were killed in the grisly battle fought with sticks, batons and nail-studded bamboo in the Ladakh region.

Despite India initially reporting just two deaths, its army yesterday revealed the horrific scale of the violence which left 20 Indians dead, including a colonel.

Indian security forces said neither side fired any shots in the clash which was the first deadly confrontation along the 2,175 mile frontier since 1975.